There was nothing that KKR could do right on the day and it began with the toss where Rohit called it right and sent his opponents in. 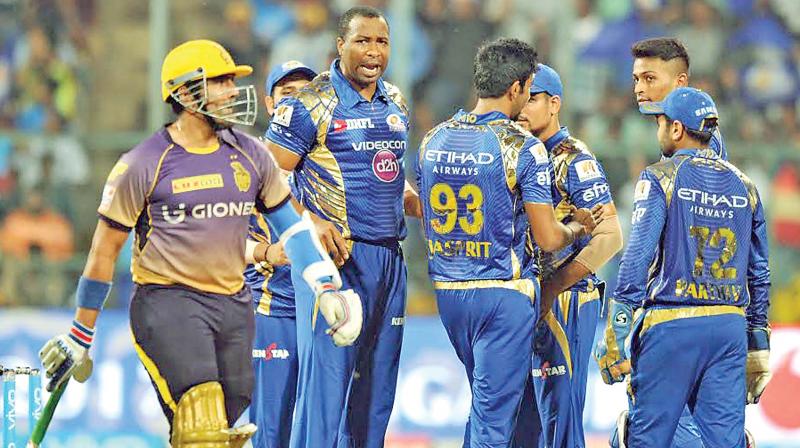 Bengaluru: Mumbai Indians were like wounded tigers and into their lap sleep-walked the Kolkata Knight Riders.

Having been forced into Qualifier 2 after being humbled by Rising Pune Supergiant at home, the mighty Mumbai destroyed Gautam Gambhir’s men with a powerful, professional display cruising to a six-wicket victory and set up a grudge final against Steve Smith’s RPS in Hyderabad on Sunday.

Come crunch time, the Knight Riders’ couldn’t lift themselves against Mumbai, whose bowling arsenal blew away Gambhir’s hopes at the M. Chinnaswamy stadium on Friday evening. A far bigger crowd than what turned up for the Eliminator two days ago were treated to some brilliant display of bowling by Karn Sharma (4/16) and Jasprit Bumrah (3/7) as the Knights were crushed under the weight of their expectations.

Left shell-shocked at 31 for five after seven overs, KKR barely managed to get past three figures through a face-saving 56-run sixth-wicket partnership between Suryakumar Yadav (31) and Ishank Jaggi (28), being bowled out for 107 in 18.5 overs.

Left to chase a small total, Mumbai wouldn’t look a gift horse in the mouth. Though encountering a small hiccup losing their top order in Lendl Simmons, Parthiv Patel and Ambati Rayudu with just 34 on the board in the 6th over, Krunal Pandya (45 n.o., 30b, 8x4) and skipper Rohit Sharma (26, 24b) guided them with a racy 54-run (40b) fourth wicket partnership as Mumbai raced to 111/4 with 33 deliveries to spare.

Frankly, there was nothing that KKR could do right on the day and it began with the toss where Rohit called it right and sent his opponents in.

Bumrah with his quirky action set the cat amongst the pigeons snaring the dangerous Chris Lynn in the second over and leggie Karn rocked the Kolkata citadel snaring pinch-hitter Sunil Narine with his fourth delivery off the fifth over.

At 25/2 after five, KKR were a pale shadow of the team that blasted Royal Challengers at this venue racing to 105 in five a little less than two weeks ago.

The pacy Bumrah trapped Robin Uthappa with an unplayable delivery on his legs and his spell read two for two. Karn then ensured the poorest Power Play by Kolkata forcing Gambhir to hit straight to Hardik Pandya in the deep before trapping Colin de Grandhomme for a first-ball duck. Having dropped the misfiring Yusuf Pathan and missing the injured Manish Pandey, KKR were in deep trouble.

If the first six produced a mere 25, it was 43/5 at the end of ten. Suryakumar and Jaggi then attempted a rescue act with a brave but brief partnership even as owner Shah Rukh Khan was a silent spectator in his box.

Just when the sixth wicket stand seemed to lift Kolkata, Karn returned to bag his fourth getting rid off Jaggi, whose powerful hit rocketed straight to Mitchell Johnson at long-on. With the wheels having come off, Bumrah picked up his third as Suryakumar fell looking to up the ante, a feature which totally escaped KKR’s sights this evening.

Kolkata had to strike quick and repeatedly to make a fist of it and though they created some excitement with three early wickets, the left-handed Krunal showed why Mumbai rate him so highly. Taking charge in the company of his skipper, the tall Krunal guided them to the final with some clinical hitting even as Rohit after clattering Chawla to the roof, fell to Nathan Coulter-Nile. But it was only theatrical relief for Kolkata as the rampant Mumbai drove home.