The problem was that all the RCB batsmen looked to hit big from the first delivery but the fluidity was missing. 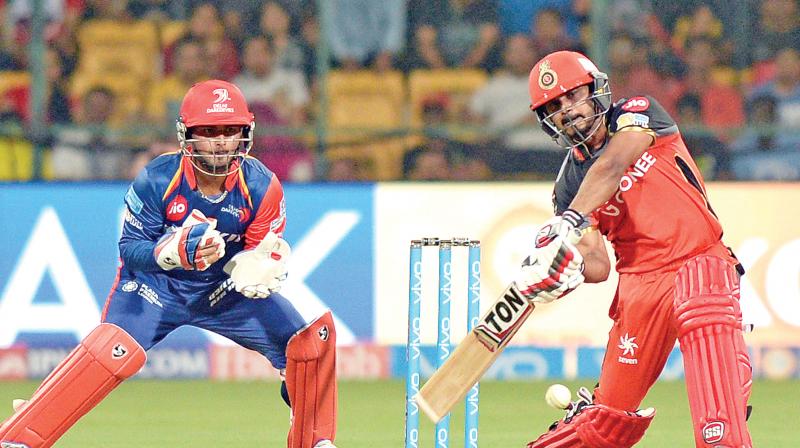 Bengaluru: Stand-in skipper Shane Watson came up with the goods for the Royal Challengers Bangalore when it mattered most. Having been unable to get going with the bat, Watson bowled two crucial overs — the 17th and 19th — when the heat was on to give away just seven runs in those two to throttle Delhi Daredevils in a chase that had its heart-stopping moments.

In a contest that went down to the wire at the M. Chinnaswamy stadium on Saturday night, the Challengers, having put up 157/8, were seemingly undone by the imperious Rishabh Pant, who overcoming a great personal tragedy following his father’s death three days ago, almost pulled off a caper. But the visitors, in with a chance were restricted to 142/9, losing their way in the last 15 minutes.

Coming in at 55/3, the 19-year-old smacked a racy half-century just like Kedar Jadhav had done for the Challengers in the evening but perished only in the final over as the Challengers snatched a 15-run win in their second game.

Needing 37 off the last four, Delhi were stifled by Watson as Pant looked on helplessly with Amit Mishra cluelessly flailing his bat around, leaving the youngster to get 19 from the last over.

It was too much for Pant (57, 36b, 3x4, 4x6) as Watson’s stroke of genius in bringing on Pawan Negi saw the Delhi batsman being castled and with it, ending Delhi’s hopes.

Earlier, with the home team making four changes — sign of insecurity? — from their first game defeat to the Sunrisers, it was clear they were desperate.

Promoting himself up the order to join Chris Gayle at the top, Watson flattered to deceive as did the rest of the team, leaving Jadhav, who single-handedly took them to a respectable total.

Jadhav (69, 37b, 5x4, 5x6), who smote the bowlers with absolute disdain looked as if he was in a trance, nonchalantly brushing away the non-striker after each of his big hits. He even gave the same treatment to his captain, suggesting him to get on with it.

Jadhav did get on punishing Carlos Brathwaite and Amit Mishra, plundering the leggie for 24 in the 13th over to lift the spirit of the RCB camp. With Gayle falling cheaply again, Mandeep Singh dragging on Pat Cummins’ express delivery and Watson stumped by Rishabh Pant, playing just three days after his father’s demise, the home team were in trouble.

The 66-run fourth wicket partnership between Jadhav and Stuart Binny, whose personal contribution was just 16, lifted the Challengers’ run rate even as the Delhi bowlers, led by Chris Morris (3-21) stifled them.

The problem was that all the RCB batsmen looked to hit big from the first delivery but the fluidity was missing.

RCB’s most productive overs were between the 10th and 15th and once Jadhav fell in the 17th, the rate dipped with Delhi skipper Zaheer Khan, showing no sign of rustiness, picking up 2-31 from four.