With this successful mission on Thursday, the PSLV rocket has launched 345 foreign satellites belonging to 36 countries since 1999 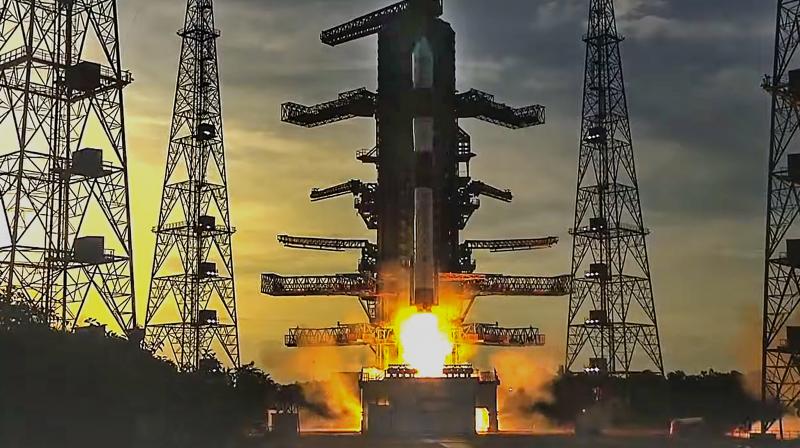 ISRO's PSLV-C53/DS-EO and 2 other co-passenger satellites being launched from the second launch pad, at Satish Dhawan Space Centre in Sriharikota. This was the second dedicated commercial mission of the space agency's commercial arm NewSpace India Limited (NSIL). (PTI Photo)

Hundreds of people gathered to witness the launch from the view gallery of the Space Theme Park and cheered in delight as the rocket zoomed into the blue skies.

A four-stage expendable, 44.4m-tall PSLV-C53 with a lift-off mass of about 228 tonne, the total weight of the three satellites is 522.8 kg. It took off majestically with textbook precision at 6.02pm into the Space, leaving a trail of orange flames.

The rocket will write some `POEMS’ in Space, he said while referring to using the spent fourth stage to carry out a set of scientific experiments.

Somanath said the control of PS4 or the fourth and final stage of the rocket will be taken over by its systems after ejection of the three Singapore satellites.

The ISRO chief said the PS4 with six payloads will carry out experiments in Space.

ISRO scientists said PSLV-C53 is designed to orbit DS-EO satellite along with two other co-passenger satellites from Singapore. Both DS-EO, a 365kg satellite and NeuSAR, a 155kg satellite, belong to Singapore. The third satellite is a 2.8kg Scoob-1 of Nanyang Technological University (NTU), Singapore.

The Indian Space agency has PSLV variants PSLV-DL with two and PSLV-QL with four strap-on motors and PSLV-XL with bigger booster motors.

NeuSAR is Singapore's first small commercial satellite carrying a SAR payload, which is capable of providing images day and night and in all weather conditions.

SCOOB-I satellite is the first satellite in the Student Satellite Series (S3-I), a hands-on student training programme from the Satellite Research Centre (SaRC) at Singapore's NTU School of Electrical and Electronic Engineering.

* This is the 55th mission of PSLV and 15th mission using PSLV-Core Alone variant.

* With this successful mission on Thursday, the PSLV rocket has launched 345 foreign satellites belonging to 36 countries since 1999.

* The rocket that flew on Thursday was the 55th mission of PSLV and the 15th mission using the PSLV-Core Alone variant.

* In its normal configuration, the PSLV rocket will have six strap-on booster motors hugging its first stage.

*In the Core Alone variant of PSLV, the six strap-on motors will not be there as the payload weight is less.