The satellite is intended to continue the remote sensing data services to global users. 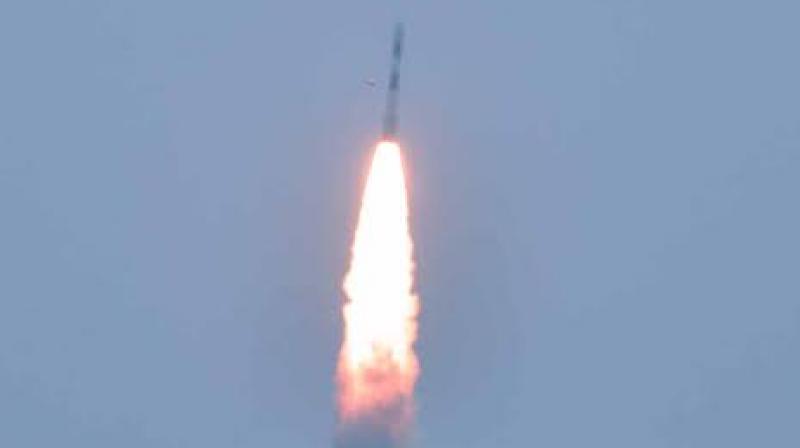 It will carry similar payloads as carried by its predecessors Resourcesat-1 and Resourcesat-2. The 36-hour countdown of the satellite launch started at 10.25 p.m. on Monday.

Sriharikota: The launch vehicle PSLV-C36 took off leaving orange flames behind into the cloudy sky from the first launch pad of Satish Dhawan Space Centre, Shar, Sriharikota as per schedule at 10.25 AM. However those waiting to have glimpse of PSLV were disappointed as the clouds blocked the visibility of the rocket.

It is 38th flight, Polar Satellite Launch Vehicle has placed the Resourcesat-2A Satellite close to desired 817 km polar Sun Synchronous Orbit (SSO). For the first time cameras mounted on the launch vehicle helped ISRO Scientists to watch the separation of various stages and even the deployment of solar panels.

Resourcesat-2A is a follow on mission to Resourcesat -1 and Resourcesat-2 which were launched in 2003 and 2011 respectively. Thanks to 20 kg fuel meant for probable dispersions saved with the precise injection of the Resource-2 Satellite.

It has helped in enhancing the operational life of the Satellite that was designed only for 5 years. In case of Resourcesat-1 also, the satellite was healthy and operational for over 12 years. The advantage now for ISRO because of the presence of Resourcesat-2 with good health in the orbit is that the ground observation frequency will be doubled following the launch of 2A.

Project Director of the Resourcesat-2A, Dr Nagesh S.K. said that it is always better to have a backup for the satellites and claimed that all the shortcomings in Resourcesat-2 have been taken care in the design of Resourcesat-2A after in orbit observations. There are many value additions to Resourcesat-2A and it provides continuity of services offered to various user agencies, he noted.

Resourcesat-2A carries three payloads which are similar to those of RESOURCESAT-1 and RESOURCESAT-2. They are a high resolution Linear Imaging Self Scanner (LISS-4) camera operating in three spectral bands in the Visible and Near Infrared Region (VNIR) with 5.8 m spatial resolution and steerable up to ± 26 deg across track to achieve a five day revisit capability.

Meanwhile PSLV, with 36 successful launches to its credit, has emerged as the workhorse launch vehicle of ISRO and is offered for launching satellites for international customers. PSLV can be called as multipurpose launch vehicle as it has been launching multiple satellites in polar SSOs, Low Earth Orbits (LEO) as well as Geosynchronous Transfer Orbit (GTO) and sub GTO.

During 1994-2016 period, PSLV has launched a total of 121 satellites, of which 79 satellites are from abroad and 42 are Indian satellites. In this flight, the 'XL' version of PSLV with six solid strap-on motors is used.