Defeating demons in the battle for Bengal

The State’s function is to maintain peace, law and order and enable worshippers to do what they do as part of their religion. 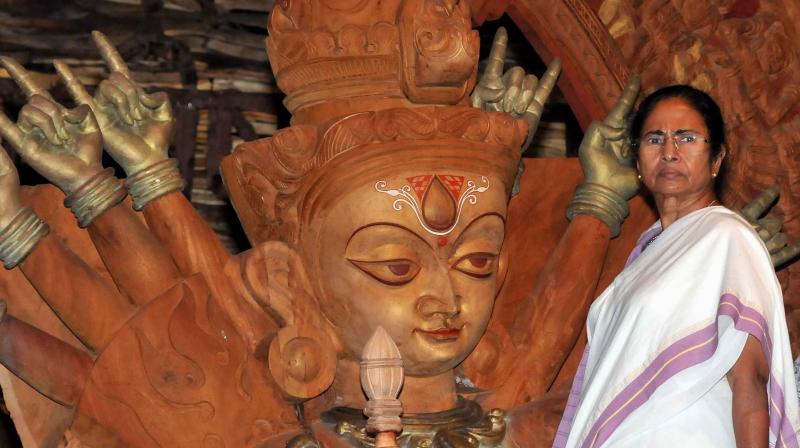 What is the most effective strategy to manage the carnival of immersion of Durga images when it coincides with the start of the Muharram rituals of mourning with gatherings of the faithful and tazias in the streets, both important rituals for the communities of worshippers, is a question to which the only answer is — wait and watch. By hurrying to announce a solution that amplified the possibility of tensions, even conflict, West Bengal’s chief minister Mamata Banerjee has done exactly what she was being pushed to do — to react instead of responding politically.

The Calcutta high court shot down the West Bengal government’s plan to change the schedule for immersions and pointed out that the State in India ought not to meddle in matters of religion. The State’s function is to maintain peace, law and order and enable worshippers to do what they do as part of their religion. The ruling is a textbook admonition. It does not, because it was not required to, address the politics of Durga idol immersion and Muharram.

That was very clear in the West Bengal government’s decision to prohibit Durga idol immersions after 10 pm on Bijoya Dashami (that is celebrated as Dussehra elsewhere in the country) as a precaution. It was a knee-jerk reaction, with the government clearly spooked by the Sangh Parivar’s announcement that it would organise Astra Puja as part of the Dashami celebrations, with sword-wielding trident-brandishing devotees clearly symbolising the triumph of good (the deity Durga) over evil. Mamata Banerjee certainly anticipated the worst.

The fear of a breakdown of communal harmony in West Bengal as the night of Bishorjan (Durga idol immersion) and the start of Muharram processions coincided, is very real for the government as both processions would be in public spaces, that is, the streets of Kolkata and in the districts. It would be silly to suggest that her fears are unjustified, after West Bengal has been through communal clashes sparked by social media mischief. Since in the lexicon of the Sangh Parivar, evil is personified in crudely communal terms, the move to organise Astra Pujas was interpreted by Mamata Banerjee as a move to prime the emerging body of bhakts and mobilise the general population of West Bengal to transform a recurrent coincidence into an aggressive assertion of identity.

In the past, the West Bengal government, including under Mamata Banerjee, has handled these coincidences with practiced routines of separating the organised processions of the two communities by marking exclusive routes so that the ardent do not meet face to face. What was in the past accepted as the extension of courtesy to the faithful of the two communities has been reinvented in the Narendra Modi era as a tussle for space over claims that have everything to do with identity.

The shift of West Bengal’s attitudes from secular to an emerging not-entirely-secular explains Mamata Banerjee’s response. What should have been handled politically was converted into a administrative matter, with the government issuing blanket prohibitions that spiralled into a full-blown controversy and amplified it even as it distorted the issue.

Managing the not-so-unusual coincidence of bhashan (Bishorjon/Bijoya Dashami) with Muharram has changed in West Bengal. What should have been a plan to manage the situation in the past has now become an unpredictable problem. The change is that ever since the BJP managed to successfully advertise itself as the champion of all grievances against Ms Banerjee and her government, reflected in the votes it has won since 2014, the Sangh Parivar has gone on the offensive. It has done this in two very elementary ways — by mobilising its band of bhakts to demonstrate the majoritarian presence of ardent Hindus in West Bengal, like the Ram Navami processions of men and women brandishing swords and tridents in what looked to be aggressive assertions of faith.

It has also cleverly focused on her “policy of appeasement” of Muslims and her exhibitionist politics of hobnobbing with a variety of Muslim clerics, both directly and indirectly through the social media. The messages have ominous warnings about the spread and growing power of Muslims under Mamata Banerjee’s patronage. To back up the idea of a growing Muslim population that would overtake Hindus in the state, fake news on social media has been effectively deployed to spread a sense of fear and animosity that has sparked communal violence and raised the levels of tension in West Bengal in recent months. At least a dozen incidents have occurred, according to some accounts, that have fuelled the emerging open antagonism.

By positioning Mamata Banerjee as a “sellout” to the other side, the BJP has driven her to react by defending her political tactics of attaching the significant Muslim vote to the Trinamul Congress and away from the Left led by the CPI(M) as well as the Congress. If Ms Banerjee had not announced a characteristically simple, but autocratic solution to the Sangh Parivar’s aggravation, it is not certain that the issue would have died down.

Every time Ms Banerjee reacts to the deliberate provocations of the BJP, what she ends up doing is deepening the communalisation of politics in the state. The BJP has become the defender of the Hindu faith by default. The BJP’s construction of a new narrative in West Bengal involves reinventing the politics of majority versus minority that underpinned the violence before and during Partition. It is working hard to make West Bengal reimagine itself as a Hindu majority state where the Muslim presence and power is expanding with the patronage of parties that have been in power in the past as well as the Trinamul Congress in the present. The political story of defeating evil has changed from vanquishing communal enmity to reinventing communally charged suspicions. Ironically, the carnival of Durga Puja had evolved as a secular celebration of the Bengali spirit.