What might further encourage such Opposition aspirants as Rahul Gandhi and Mamata Banerjee is that the economy is in the doldrums. 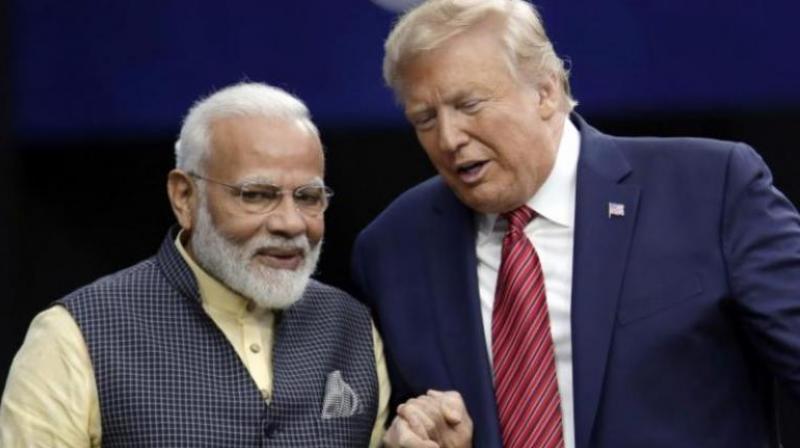 When then US President Richard Nixon landed in New Delhi at the height of a boiling Indian summer in 1969, Prime Minister Indira Gandhi received him with the far from welcoming remark: “You came at the wrong time of day and the wrong time of the year.” That comment could be made on Monday to President Donald Trump, not because the mercury is bubbling or Prime Minister Narendra Modi is an ungracious host, but because of the political and economic pressures behind the current unrest.

India is at sixes and sevens. Which makes it all the more gratifying that Mr Trump’s is the first standalone visit in 75 years of diplomatic relations even if it is a hard-sell salesman’s 36-hour whistlestop trip. India needs the United States for trade, investment, security and sophisticated dual-purpose technology. However, although weapons are important, they cannot be the main prop of a partnership that goes far beyond defence problems with two of India’s neighbours. Nor can H-1B visas and Green Cards, although for many Indians the US is their escape to the good life. That is a measure of the poverty that characterises this country far more than a small coterie of billionaires waxing rich under official patronage. Whether or not the ebullient US President acknowledges it, far from being another Asian hegemon, India is not only poor but backward and lagging far behind developed nations in all the globally recognised indices of growth.

There is little question, therefore, of India pressuring an assertive and expansionist China either to do business on American terms or adjust its traditional geopolitical thinking to a new concert of Asia. Yet, this is what the US seeks. It is the ultimate objective of moves like reviving the Quadrilateral Security Dialogue which the Chinese view with deep suspicion, and renaming the oldest and largest US command “which includes 36 nations as well as both the Pacific and Indian Oceans” the Indo-Pacific Command. But despite these marks of approbation for a nation in which he, as a businessman, has invested his name and reputation if not his money, Mr Trump will find India in some disarray if he looks beyond Mr Modi’s brave rhetoric.

The Aam Aadmi Party’s victory in the recent Delhi Assembly elections warned the ruling Bharatiya Janata Party that there is always an alternative to the ruling party in a democracy. (In fact, one reason for Mr Trump’s visit is that he himself faces the democratic test in November.) The tumult in so many cities over the Citizenship (Amendment) Act, the National Population Register and the National Register of Citizens may be illogical and emotion-driven, but does show up the government’s helplessness in the face of a popular upsurge that the Opposition parties might yet harness to electoral purpose as Jayaprakash Narayan was able to do in 1977.

What might further encourage such Opposition aspirants as Rahul Gandhi and Mamata Banerjee is that the economy is in the doldrums. Finance minister Nirmala Sitharaman’s refusal to admit this explained the irrelevance of her recent lacklustre Budget. Unemployment is the highest in 50 years, exports are stagnating, foreign direct investment has not lived up to expectations, a sluggish 4.5 per cent growth is dragging down the global average (as Gita Gopinath, the IMF’s chief economist, pointed out much to New Delhi’s chagrin), only 15 million Indians pay income-tax, and the government is trying to sell nationalised assets worth $30 billion to meet its fiscal deficit.

Mr Trump and his high-powered team must already have some inkling of the straits in which India finds itself. They don’t need to peer behind Ahmedabad’s newly-built wall and gaze on a shantytown of 500 huts housing nearly 3,000 slum dwellers to understand the level of destitution. The US Citizenship and Immigration Services would not have reported that nearly 7,000 Green Card applications by Indians — almost 35 times the number in 2018 — are pending if conditions were hunky-dory at home. New Delhi cannot but be evasive on this point because one cause of high unemployment is its own abrupt and arbitrary decision to demonetise high-denomination currency notes and the devastating impact it had on the informal sector.

None of this will come as a surprise to the Americans who must know that the growth rate of Indo-US trade fell from 8.4 per cent in last year’s first two quarters to a mere 4.5 per cent in the last quarter because of the economic slowdown. Trade in goods and services stood at a miserable minus 2.3 per cent, in contrast with the 9.6 per cent growth recorded for the year’s first two quarters. The old “Make in India” slogan associated with the Congress Party and its swadeshi commitment that Mr Modi discovered and reiterates as if it is his own coinage can’t by itself boost manufacturing.

India’s relations with the United States depend to some extent on the party that occupies the White House. There may be a philosophical commonality with the Democrats like John F. Kennedy or Jimmy Carter, but their own programmes have allowed Republican Presidents like Dwight D. Eisenhower and George W. Bush to cooperate more closely on a practical plane. There are limits, however, to such engagement, and it might not be in India’s interest to play an active role in the Honolulu-based Indo-Pacific Command, which covers “over half of the earth’s surface and its diverse populations, from Hollywood to Bollywood, from polar bears to penguins, as former US defence secretary Jim Mattis once put it.

India’s priorities are nearer home and more economic than military. It is to be hoped that swept off his feet by Mr Trump’s heady flattery, Mr Modi will not commit India either to massive weapons purchases to counter the ever-present terrorism bogey, or to policing duties that do not directly benefit our impoverished millions.