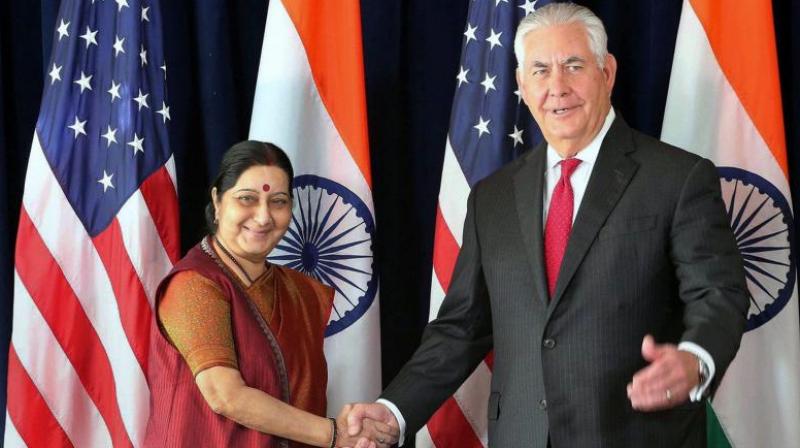 There are things happening in American foreign policy and happening fast. Much of these relate to India. Just as China is defining its future through the deliberations of the 19th congress of the Communist Part of China, the Trump administration is coming to terms with the reality of US responsibility in global affairs. In the run up to the last presidential elections, Donald Trump’s agenda appeared to harp on the internal strengthening of the US and dilution of its international footprint and commitments; an era of isolation was anticipated. The realisation is now dawning that a superpower can get into sudden isolation and delink itself from strategic realities of the world at the cost of its own and the world’s security. While President Trump may take time to understand the responsibilities his nation carries, his senior officials like secretary of state Rex Tillerson and defence secretary James Mattis are revealing a more mature side and are therefore tempering US foreign policy in line with global realities.

India appears to form an increasingly important part of America’s new worldview. There are three roles that the US apparently looks for India based on the commonality of ideas and values, and also the reliability factor. The first of these is to assist it in stabilising Afghanistan and in countering global terror. Second, it looks to India forming an important part of the structure for the stability of the Indo-Pacific region (formerly Asia-Pacific). Third is to act as the overall foil against Chinese hegemony. In the fitness of things, it can also be said that India’s large landmass, geostrategic location at the crown of the Indian Ocean, political stability, centrist ideology and lack of any hegemonic ambitions largely suits US strategic interests spanning from Southwest Asia to the Indo-Pacific. India’s rise has been peaceful, with concentration on economic strength more than on any geopolitical ambitions. Its strategic view has an offensive content only to the limits of its existential security. That notion allows it to seek uncomplicated strategic partnerships to play its legitimate role in global strategic affairs.

Under former US President Barack Obama, the US sought to reinforce its post-Cold War strategy to lower the priorities of the Euro theatre, and Middle East in favour of a “rebalancing emphasis” towards Asia, also referred sometimes as the Asian pivot. That rebalancing viewed Asia as a whole, with increasing emphasis on the Indo-Pacific region, where China has competing interests. However, events such as the AfPak war, the Ukraine crisis, the ISIS phenomenon in the Middle East and the Syrian civil war prevented this from taking shape; the pull towards the Middle East and Southwest Asia was always distinctive through the millennium so far. With China’s aggressive rise and no intent towards slowing down, it’s increasing outreach far beyond its shores and borders and reluctance to follow a “rule-based international order”, the US shift of balance to the Indo-Pacific is inevitable. However, the US cannot ignore Southwest Asia, which is increasingly considered the crucible from where the forces of radical Islam emerge. Given the havoc created by ISIS in the Middle East, the US can ill afford the rise of another major radical fiefdom; the presence of the undefeated Taliban and its capability to influence events in AfPak worries the US, specially as the sustenance for this appears to be entirely from Pakistan. That is the reason for return of the US in its attention towards Afghanistan. It can ill afford to push Pakistan beyond a point since the latter plays the China card adroitly and withstands coercion beyond a point. However, Pakistan also has to realise that there is a point of no return in its resistance and intransigence, and that its relationship with the United States cannot be simply wished away at the altar of strong Sino-Pakistan relations.

The visit of US defence secretary James Mattis to New Delhi and the impending visit of secretary of state Rex Tillerson to the subcontinent are therefore to be viewed as search for ground and circumstances which will permit the stabilisation of Afghanistan without redeployment of out of proportion US resources. The broad idea put simplistically is that for the US to focus on the Indo-Pacific and prepare itself better for the emerging challenge from China it needs to stabilise AfPak and for that it needs both India and Pakistan. Pakistan will no doubt sell the notion of its insecurity related to any Indian role in Afghanistan, as well as India’s alleged role in Pakistan’s internal security problems. India, therefore, must convince the US that Pakistan’s active role of pursuing proxy war in Jammu and Kashmir is inherently destabilising the region and could lead to uncontrollable triggers. For the US it is important to have both India and Pakistan to partner it in its efforts towards finding ways of overcoming the Taliban challenge in Afghanistan. This is going to form the crux of diplomatic deliberations into the near future.

Notwithstanding India’s importance in all this, the US compulsion to include Pakistan in all parleys is inevitable. No one perhaps realises this better than India’s leadership, but the acme of effective diplomacy is to continue playing the cards which place the adversary under pressure. It is unlikely that Pakistan can desist from its strategy against India, and particularly in the run-up to its general election in 2018. India too must also not give Pakistan any flavour of success by acceding to unconditional talks. Only a visible pullback by Pakistan from pursuing its strategy against India would alter that course. The US has its job cut out, and it’s a difficult one.

Simultaneously, Doklam has changed much in the strategic picture in Asia. Although this is not being elaborated here, it is evident that China would now have better assessed the limits of coercion against India. Pakistan has been a keen observer too and India’s mature handling would have conveyed much to it. A revamp of the collusive Sino-Pak strategic approach towards India will inevitably be on the cards. It should also give the US greater confidence in India’s strategic maturity as also capability, thus adding more weight to the strategic partnership which along with others will manage the Asian strategic conundrum in the future as a counterweight against China.