For some of those affected by Brexit, the rise of Mr Trump and other right-wing leaders does not bode well. 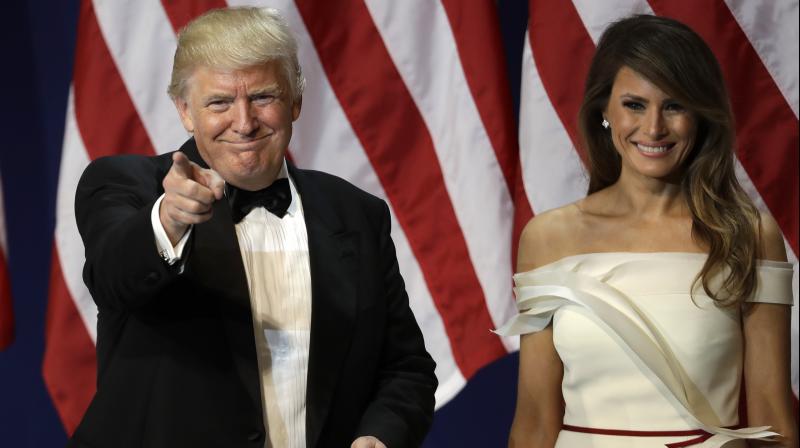 We shall overcomb” read one of the witty placards, while other women simply held signs which said “I am very upset”, as thousands of people, mostly women, poured onto the streets of the UK to protest against Donald Trump’s ascendancy as the US President. Well-known singers and actors were among the protesters, including Charlotte Church. Trafalgar Square became a hub for the protesters who possibly feel alienated and angry that someone so transparently misogynistic could occupy the highest post in the United States.

But as women lamented, Melania Trump captured headlines through her (apparent) homage to Jackie Kennedy, by wearing a cowl-collared baby blue dress at the swearing-in ceremony. So in the midst of the anger against sexism, the journalists were behaving more or less like the President. They, too, were fascinated by what the First Lady wore and how fabulous she looked. Give her a break, guys!

But then, this is how the term “arm candy” was invented — and nothing could be more apt as Donald and Melania waltzed to Frank Sinatra’s My Way. For many, Mr Trump behaves as though the women’s lib movement never happened.

Thus it was astonishing that the President did not see the irony of playing a song, whose opening lyrics are: And now, the end is near, and so I face the final curtain…

But for anti-Trump protesters it is the final curtain, as the Obamas sink into oblivion. Nonetheless, Theresa May, our PM, is off to meet the President. Undoubtedly, we will be subject to a discussion of “what the girls wore” when the Trumps meet Ms May. There is little doubt that we remain misogynistic in our view of even those women who have risen far — no wonder Hillary Clinton sticks to “pant suits” as does Angela Merkel. Certainly no one talks about who the designer is for their clothes! But as of now, we know that the Ralph Lauren share prices have soared after Ms Trump’s successful debut as the First Lady. As long as she continues to look like a million dollars — (the agitating women can march and wail and shout) — you can be sure that most men will look at her and wish their wives could be like her. Mr Trump is definitely living the old-fashioned American dream. But is that the dream he wants America to dream again?

For some of those affected by Brexit, the rise of Mr Trump and other right-wing leaders does not bode well. But where will they hide? This is reality! Martin Roth, the director of the V&A, in London, left on a high with the museum having won the “Museum of the Year” award — but he was also a disillusioned man after the Brexit vote. In a public interaction, he questioned: “What happened to tolerance, solidarity and charity? And I’m not a dreamer. I’m just talking about basic values — manners that are part of our upbringing.” Brexit opened up a deep chasm — making it impossible for him to stay.

The good news is that his successor is Tristram Hunt, a former Labour MP, who has just quit his seat from Stoke-on-Trent. Much younger, he will bring in fresh thinking and might not be mired in gloom. A historian, author and broadcaster, Mr Hunt already has an audience. He also made a remarkable contribution in saving the Wedgwood collection, which is said to be “one of the most important industrial collections in the world”, according to one report. It “is a unique archive of British politics, society, science and art, containing over 80,000 works of art, ceramics, manuscripts and letters, pattern books and photographs”.

And as someone who is passionately involved in setting up a museum on the Partition of India — let me state that a generational change is important in creating museums — as these are no longer about dusty panels and forgotten pieces of sculpture. Most of those working for the Partition Museum, Amritsar, are under the age of 35, and that’s what makes the project even more exciting! And one thing that this generational shift is bringing to us is the renewed interest in philanthropy through art and culture. Suhel Seth, ad guru and author, has just donated Rs 50 lakhs to the Partition Museum! Times are changing!

I remember meeting Mr Tristram’s charming father, Julian Hunt, also in the House of Lords. The only worrying part about Mr Tristram’s moving to the non-political sphere is that Labour might lose the seat he has vacated. Otherwise, nothing could be better for the V&A!

Sometimes a little gesture can become hugely meaningful. Just as people were a little upset when Barack Obama had removed the Joseph Epstein sculpture of Winston Churchill from the Oval Office now they must be celebrating! The sculpture, which had been given by Tony Blair to George W. Bush, has been rehabilitated by Mr Trump. You can hear the celebrations across the pond!

AA Edit | Green shoots of peace in Israel-UAE accord