Sovereignty to them meant “sovereignty for their own self and own state”, and the rest did not matter. 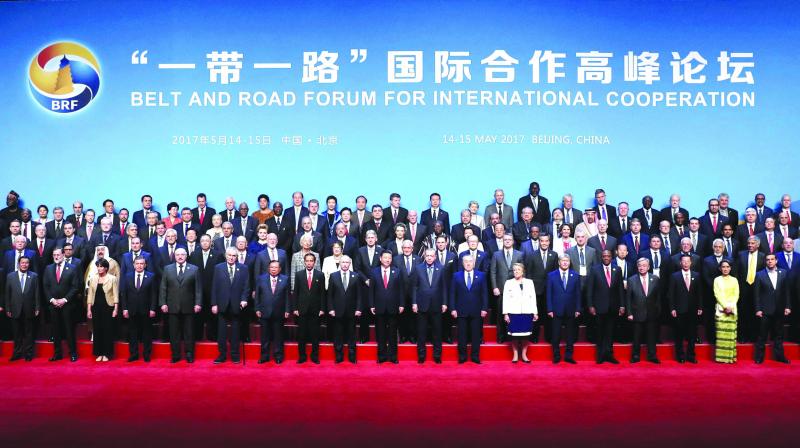 China succeeded in bringing together various countries together on one platform for the OBOR project President Xi Jinping with leaders and delegates attending the Belt and Road Forum in Beijing. (Photo: AP)

As much as we may hate, curse or criticise our former colonial masters, the Western imperial powers who once ruled over our land and much of our continent, at one level some among us also — usually covertly — admire them, look up to them and often wish we could be more like them. Why? Because they showed us the way, laid down the precedents on how to get their own way, profit at the expense of others, and exercise dominance over all those weaker than themselves.

The Western imperialists may have long gone, but they left worthy successors in place, who imbibe their sprit, imitate their actions, implement their thoughts and beliefs and try replicate their economics and commercial models for profit. They have closely studied the paths taken by the departed Western masters and are now busy trying to step into their shoes for “trade” and “shared prosperity”. Having shed their socialistic past, their role as the champions of the proletariat, they now speak the language once spoken by the colonial merchants, soldiers and administrators from the West who too had in their heyday assiduously set up the empire of “One Belt, One Road”, through land and sea, from Bombay to Peking, Cairo to Canton; the Cape of Good Hope to Calcutta; Darwin to Delhi, Mesopotamia to Madras and Suez to Shanghai. They themselves lacked the manpower to battle their adversaries, but mastered the art of hiring fighters of vassal rulers and states to throttle opponents, and possessed sea power to choke anyone, anywhere.

Sovereignty to them meant “sovereignty for their own self and own state”, and the rest did not matter. Liberty, equality, fraternity were applicable only for the West operating in the Orient. Any claim by the Orient for sovereign rights and territorial integrity were treated as good only in theory; but in reality the Orient had to act “subservient” and “share territory” for business and commerce; all in guise of economic development and the “greatest happiness for the greatest (Western) number”.

Taking their cue from past masters, the modern Chinese have understandably learnt the importance of speed — it saves time, and time saves money and enhances profit. Speedily, China wants all “inferiors” around Asia (to begin with), in which it includes India, to join and back their endeavour. All for “profit of collective prosperity” — even if it comes as a crumb or morsel. And all at the expense of self-respect and trampling of sovereignty.

Look at this “advisory” from a Chinese “expert” at the World Bank: “If you are poor, what is the point of being secure” and sovereign, with your own independent state in place? Just don’t bother — join the “club for cash” and ignore all “sovereignty” issues.

No wonder then that the non-participating Government of India had directed all state-run units and autonomous bodies to seek clearance before accepting any invitation to the OBOR Forum that was held in Beijing last week. It was crystal clear that OBOR, that comprises the Belt Road Initiative and China-Pakistan Economic Corridor, was nothing but a means to achieve the “grand land-sea strategy” of a “resurgent” China, which is still smarting from its “humiliating history” — when past rulers in Beijing in the 19th and 20th century (1839 to 1949) kowtowed to the West. For China, it was time to seek “revenge”, a challenge to reverse the history of Han humiliation and subjugation. In this process, however, China, wittingly or unwittingly, appears to have fallen into the trap by turning into a carbon copy of the West’s imperial past.

An aspiring China’s restlessness is visible in the midst of the world’s unusually protracted volatile economics. Market demand is erratic. Manufacturing, that over the past two-plus decades has been China’s forte, is facing uncertainty. Terror from the Middle East, and now with Donald Trump in charge in Washington, means more woes for Europe, which has been so far one of the most compact, prosperous, single-point mega markets among all continents. Not any more, as the scenario still looks hazy. Australia may be a good market, but with a small demographic base. Latin America is promising in parts, but still remains a backyard of the United States. Africa has resources and potential, but faces internal feuds and inadequate external assistance. That brings China to Asia, with the most densely inhabited demographic base.

Asia has everything: material, money, markets. No one knows this better than Beijing. China cannot take on South Korea or Japan, irrespective of their small size. Southeast Asia has territory and water issues with China. Central Asia is vast for trudging Beijing’s rail rolling stock, but the real market, if any, is still at a distance. India is potentially Beijing’s high-profit consumer market worth $85 billion, but tense bilateral ties could affect progress as the sovereignty of Indian territory appears to be of little concern in China’s single-point economic expansion drive through land and sea.

China prefers not to understand either the law or Indian compulsions, feigning ignorance of internationally accepted legal definitions: “Territory is a geographical area included within a particular government’s jurisdiction... in a state’s exclusive possession and control.” China is supersensitive over Tibet, Taiwan, Diaoyu and Uyghur, but simply doesn’t care about Jammu and Kashmir, which acceded to India legally in October 1947. India did not trample upon J&K the way China seized Tibet in the 1950s. China “forgets” that Tibet revolted and the Dalai Lama escaped. Taiwan refused to join Communist China and Diaoyu traditionally belongs to Japan. China also “forgets” the term “state sovereignty”, which means “the supreme political authority of an independent state” — the state itself.

China needs to be sensitive and take the necessary steps first to desist from violating India’s sovereignty and territory if it really wants India to play a meaningful and constructive role in Beijing’s OBOR/BRI/CPEC endeavour. That is the bottomline. One-way traffic in sovereignty and territory is not a good idea. All the more as the Indian position can be likened to a Latin legal term “occupavit”, which means “a writ to regain possession to land or a tenement from which one was ejected in time of war”, the territory through which the CPEC passes legally belongs to India. One can only hope that Beijing understands the fundamentals before doing a diplomatic drama to expand its economic sphere of influence.