Trump’s line: Boys will be boys

Mr Trump stands accused of assisting the Russian secret services with intelligence on Russian businessmen in the US. 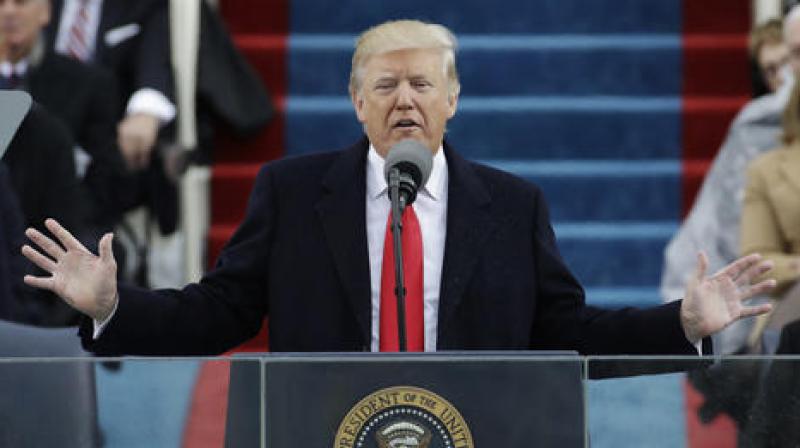 “There was no overwhelming question
That was just a bluff
And with that emptiness exposed
Was she bound to cut up rough?”
From The Overwhelming Question by Bachchoo

In our schooldays some peripatetic American teacher taught my sister a Civil War song which she spread like hair-lice. It went:

“Tramp , tramp, tramp
The boys are marching,
Cheer up comrades, they will come!”

The lines have come back to haunt me with the curse of obsessive repetition, but slightly modified. I have been singing “Trump, Trump, Trump, the boys are marching…” but in this week of the inauguration of the President-elect of the United States I feel the sensible world knows that the “boys” as opposed to the girls, are advancing and there’s very little to be cheerful about. I suppose “comrades” would be the wrong term to apply to those cheered by this coming.

I don’t know if the finger on the button is a truth or a metaphor. Can this dude trigger a nuclear holocaust? Can his belligerence translate into pressing a button and sending the world up in smoke? There are probably all manner of checks and balances before the image and the threat turn literal. The Chinese President’s warning to Donald Trump not to start a trade war indicates an anxiety of a more serious kind.

Mr Trump’s protectionist anti-globalism will hit very many countries. Will call centres move back from Bengaluru to Bullshitcreek? Will the price of bricks go up when he builds his 2,000-mile wall?

The speculation in the hopeful press is that Mr Trump won’t last a full four years. The hopeful, predictive commentators foresee an impeachment on as yet unspecified grounds. The conduct and experience of Bill Clinton would indicate that the American legislative bodies don’t regard sexual misconduct as a terminal offence. Mr Clinton lied to the nation when he said he didn’t “have sex” with the young intern in the Oval Office. He was playing semantics with the phrase.

Now a young woman with the unusual name of Summer Zervos has filed a case for defamation against Mr Trump. She claimed publicly that two years after she had been a contestant on his TV show and approached him for employment, he forced himself on her kissing her and fondling her breasts. Mr Trump publicly called her a liar and Ms Zervos’ lawyer now says they will seek through the courts to clear her name unless Mr Trump publicly acknowledges that she is telling the truth.

I wonder what his advisers would tell him to do. Does the US President have to appear in person to answer a defamation charge? I suppose the case will boil down to her word against his. If the case comes to court both sides will try and bring evidence and witnesses to prove moral turpitude on the part of the accuser and the defendant. It will be great fun as a worldwide spectator sport but it won’t be a politically dignified spectacle for US democracy.

If I was one of his advisers — let’s say a military man accused of corruption, an ex-Ku Klux Klansman or a dodgy hedge fund or Wall Street operator with a string of failures and million-dollar bonuses to my name — I would tell him to “fess up”. Boys will be boys, okay, so I did try to kiss her, what’s the big deal — I wasn’t President then and didn’t Billy do much worse while he was? I think he’d get away with that and Ms Zervos has promised to drop the charge if he says as much. He could even add a bit of flattery, saying she was irresistible, though that may not go down well with women worldwide but will certainly be digested and even silently appreciated by the male-dominated Senate and the Congress.

The most recent US impeachments and threats of impeachment to succeed, caused the resignation of President Richard Nixon, arraigned for Watergate, a political snooping exercise.

Mr Trump stands accused of assisting the Russian secret services with intelligence on Russian businessmen in the US. It is also alleged that his campaign team was aware of an official Russian hacking operation which smeared Hillary Clinton. Even if evidence to prove both these allegations is produced, will the legislatures of the US, despite both being darkened by the shadow of Watergate, see them as impeachment offences? Moods have moved on, so I doubt it.

The most scandalous possibility, denied by President Vladimir Putin this week, is that the Russian secret services have clandestinely shot footage of Mr Trump in Russia using the services of prostitutes to perform disgusting acts. Christopher Steele, the British agent, who has written a 32-page dossier alleging the existence of this potential blackmail weapon against the President of the US, has had to go into hiding for fear of retribution from Trumpeteers.

Mr Putin’s rebuttal of this speculation included the boastful claim that though it was unlikely that Mr Trump has used their services, Russian prostitutes are the best in the world. Perhaps he is an expert and should write a definite bestseller comparing the pleasures of the world’s sex workers.

If Mr Steele’s evidence proves to be true, can it really be used to blackmail President Trump? Let’s assume Mr Trump wants to do something that Russia doesn’t like. Mr Putin phones him up on a hot line and threatens him with exposure unless…

Is that really an offer Mr Trump can’t refuse? If, again, I was his adviser, I’d tell him to tell Mr Putin to do his damndest and put the visual evidence on the Internet. The American boys would enjoy their President doing what some lads do and other lads envy. Would it lead to impeachment? As Mr Trump’s adviser I would use the “boys will be boys” line and point out that the sexual contracts that citizens of the US who are not yet President enter into is nobody’s business. Mr Trump’s election may prove that moral fibre is no longer a prerequisite for holding office in the US. Boys will be boys!