Opinion   Oped  20 Aug 2019  From state to 2 UTs: Govt must get the ‘constitutional rewiring’ right
Opinion, Oped

From state to 2 UTs: Govt must get the ‘constitutional rewiring’ right

A certain rectitude, restraint and dignified empathy for the common person on the street will go a long way in healing the seeds of distrust. 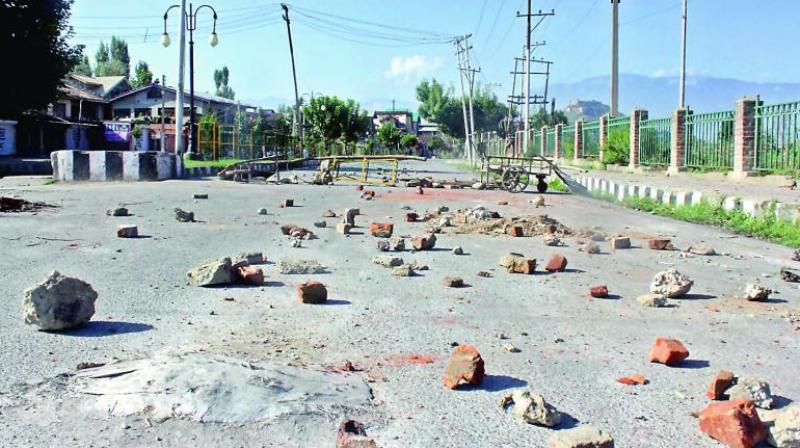 A street in Srinagar wears a deserted look with stones strewn across the road after protests against revocation of Article 370. Central Kashmir DIG Police V.K. Birdi said only minor incidents of violence had occurred in Srinagar on Monday. (Photo: H.U. Naqash)

India’s constitutional wiring affords structural governance units that are either “states” or “Union territories” (UT). The States Reorganisation Commission in 1956 practically designated those federal units that were either too small (geographically and population-wise) or those units that were still not part of “India” during independence in 1947 as Union territories. Therefore Lakshadweep, with a population of less than 65,000 (as per Census 2011), or the former Portuguese colonies like Dadra and Nagar Haveli (annexed in 1954) and Daman and Diu (annexed in 1961) became “Union territories”. Similarly, practical issues like the sheer distance from the mainland of India (1,200 km) ensured that the Andaman and Nicobar Islands also became a “Union territory”, as did the former French colony of Puducherry, following the ratification of the Treaty of Cession. Even political considerations come into play in ensuring a neutral status of “Union territory” for a place like Chandigarh that remains a joint capital and a bone of contention for both Punjab and Haryana. Over time, as political aspirations mature and as practicality warranted, certain “Union territories” evolved into full-fledged “states” like Himachal Pradesh, Manipur, Tripura and Goa. The popular traction for full statehood is a natural phenomenon in even those units that still remain a “Union territory”, like the Andaman and Nicobar Islands or even in the case of “partial” statehood in Delhi that routinely manifests in the ongoing LG-CM dissonances.

The bifurcation (effective from October 31, 2019) of the composite “state” of Jammu and Kashmir into two “Union territories” of Ladakh and that of Jammu and Kashmir will take the total tally of “Union territories” from seven to nine and that of the “states” from 29 to 28. However, unlike the relative standardisation of the framework of “states” — the “Union territories” reflect shades of evolutionary structuring that is keeping in consonance with the practical, political, strategic and administrative construct that is flexible and varied. In practical terms, the impact and imprint of the “Union” is more direct in the “Union territories”, whereas the spirit of federalism by way of enhanced political control is of a higher degree in the full-fledged “states”. Ironically, this template is both logical and helpful for the “Union territory” as the direct “hotline” with the Central government is often required to ensure speedy access and indulgence that could otherwise get lost in the realities of participative-democracy, owing to the limited size of these Union territory units and their resultant say in Parliament.

However, the various evolutionary shades of governance within a “Union territory” range from a relatively compact team led by an serving bureaucrat designated as an “administrator” in Union territories like Daman and Diu, Lakshadweep, Chandigarh and Dadra and Nagar Haveli. However, the Andaman and Nicobar Islands has a more expansive administrative team led by the lieutenant governor-cum-administrator, to a Puducherry model having its own “special constitutional amendment” ordained Legislative Assembly, with a Cabinet of ministers, thereby implying “partial” statehood, as also in the case of Delhi. Amidst this landscape of possibilities, the recently-bifurcated UTs of Jammu and Kashmir and that of Ladakh will have a more elaborate model of governance (with a Legislative Assembly, a chief minister along with a Cabinet in J&K’s case) — with both territories under their respective lieutenant governors duly appointed by the President of India. Clearly, the circumstantial necessities in the strife-torn region, more than other considerations, compelled the re-designation of these areas from a “state” to two “Union territories”. While the reversal to a full-fledged “state” has not been ruled out in the case of J&K, in order to assuage the sentiment, it is important to remember that Jammu and Kashmir is not the first instance of a “state” to a “Union territory”, as Delhi was initially a state (Chaudhary Brahm Prakash and Gurmukh Nihal Singh were the chief ministers in the period 1952-56), and was later redesignated as a “Union territory”.

Irrespective of the merits and perceived implications on the recent moves in Jammu and Kashmir, the shift to a “Union territory” will afford more leeway, access and speed to the Centre to make administrative decisions, investments and initiatives in the restive region. This is a window for the Centre to make the necessary inputs that could have been getting mired under the possible morass of politics — however, it is equally important to realise that this window comes with a short shelf-life and unless perceptible and positive changes are felt by all within the region, it will give way to a sense of despondency. The self-appointed stakeholders across the Line of Control as well as the misguided elements within the internal ecosystem will try to derail the return to normalcy, yet the Centre has to walk the tightrope of an “inclusive” approach to win over the hearts, heads and the trust of the locals. Such wounded times are a veritable minefield of rumours, aspersions and acute negativity that can get further accentuated by the conduct and statements emanating from the rest of the country. A certain rectitude, restraint and dignified empathy for the common person on the street will go a long way in healing the seeds of distrust and alienation that have been sowed by vested interests by both, across and within the Line of Control. From the newly-appointed administrators, national political classes and the mainstream citizenry, it is imperative to understand that the ultimate solution lies in the socio-economic, political and emotional well being of those within these newly-minted “Union territories”, and not those on the outside.

Importantly, the government has kept the opportunity of evolving from a “Union territory” to a full-fledged “state” open in the case of J&K, as the political undercurrents in Puducherry or Delhi will show that ultimately the people invariably want more ownership of the governance levers themselves through their elected representatives in any thriving democracy. The historically ignored aspirations of the Jammu and Ladakh regions have also got a rightful lease of life. However, care must be taken to ensure that it is not posited at the cost of one region versus the other, as each of the three regions has had historical and genuine grouses that need to be simultaneously addressed.