The India-Iran agreement on Chabahar port, located outside the Persian Gulf, was signed in May 2016 when PM Narendra Modi visited Iran 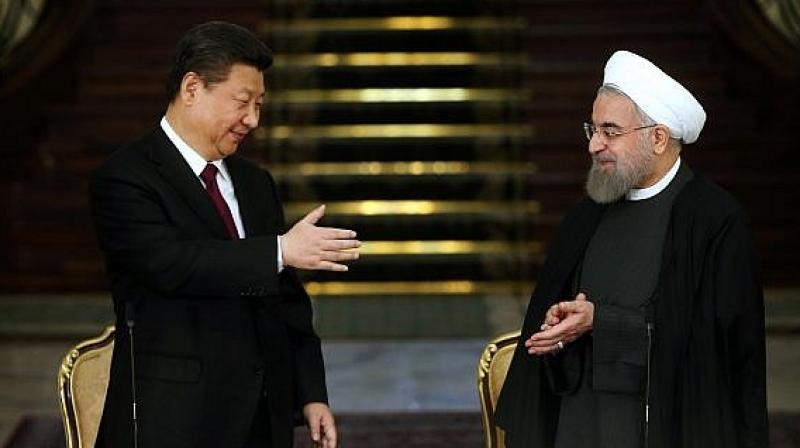 While the Sino-Indian de-escalation at the Line of Actual Control (LAC) in Ladakh is still, as external affairs minister S. Jaishankar said, a “work in progress”, China as a factor in India-Iran relations became more manifest by two developments.

One, the New York Times published a leaked draft of a Sino-Iran “sweeping economic and security partnership”, encompassing $400 billion in Chinese investment over next 25 years.

Two, reports that Iran was dropping India in the development of the Chabahar-Zahedan rail project, a showpiece of Afghanistan-Iran-India trilateral cooperation.

China had earlier too ramped up its Iranian presence whenever India, Japan and the European Union reduced their engagement after 2006’s UN sanctions over Iran’s nuclear programme. But the scale and timing of the current foray is significant.

Former President Barack Obama changed America’s Iran policy from confrontation to calibrated engagement, realising the fight against ISIS in Syria-Iraq was unwinnable without Iran. This even involved Washington endorsing the P5+Germany 2015 nuclear deal with Iran.

Unsurprisingly, the India-Iran agreement on Chabahar port, strategically located outside the Persian Gulf, was signed in May 2016 when Prime Minister Narendra Modi visited Iran. This included the construction of the Chabahar-Zahedan railway line for improving connectivity with Afghanistan and Central Asia.

In May 2018, US President Donald Trump abandoned the nuclear deal with Iran, called the Joint Comprehensive Programme of Action (JCPOA), imposing comprehensive sanctions to build “maximum pressure”. India always implemented the UN-mandated sanctions against Iran but avoided unilateral ones by the United States.

Mr Modi’s wooing of President Trump and his unwillingness to upset a truculent leader led to quietly adopting the US-mandated trade and investment boycott of Iran.

Tehran would have noted this. India’s abrogation of Article 370 in Kashmir in August 2019, and the reshaping of J&K, also riled Iran.

On August 21, 2019 Iran’s Supreme Leader Ayatollah Ali Khamenei tweeted: “We’re concerned about Muslims’ situation in #Kashmir. We have good relations with India, but we expect the Indian government to adopt a just policy…”. Iranian President Hassan Rouhani separately said: “Muslims of Kashmir must be able to use their legal rights and interests to be able to live in peace”. Thus, geopolitics and the BJP’s domestic political agenda converged to blight India-Iran ties.

The New York Times reports that the new and comprehensive cooperation agreement between Iran and China was on offer since the 2016 Iran visit by Chinese President Xi Jinping.

Iran was still unsure about US policy under a new President. The Trump presidency chose total confrontation with Iran, believing Iran would buckle. Former American NSA John Bolton, in The Room Where It Happened, recounts Mr Trump’s emotional vacillations and his Iran policy.

In mid-2019 Mr Trump half-heartedly backed Japanese PM Shinzo Abe’s proposal, before the G-7 summit in Japan, to play peacemaker between the US and Iran. Mr Bolton writes that Mr Abe’s idea was acceptable only “if they make the deal, meaning not a concession now, but only after Iran had given up nuclear weapons”.

Mr Abe failed as he went empty-handed asking Iran to accept a new nuclear deal and curtailment of its regional influence. Mr Abe recounted to Mr Trump that “Khamenei took notes as Abe spoke but (finally) said he had no response”.

Which came via a tweet, even before Mr Abe boarded his plane, that Khamenei recognised the “goodwill and seriousness” of Mr Abe but did not consider Mr Trump “as a person deserving to exchange messages with”. Mr Trump privately called Khamenei’s remark “nasty” and tweeted in response that a fresh deal with Iran was impossible as “they are not ready, and neither are we”.

Thus, with the Iranian economy under duress, Iran saw a comprehensive engagement with China for investment, trade and defence cooperation as its only lifeline. Although Iran greatly values strategic independence, necessity overpowered caution. Iranian foreign minister Javed Zarif was in China last October to finalise the agreement.

However, the Covid pandemic in China and later in Iran this year delayed its conclusion. It lists nearly 100 projects, proposes three free trade zones in Maku in northwest Iran, Abadan in the southeast close to Shatt al-Arab and on Qeshm island, which would challenge GCC dominance of trade and manufacturing in the Gulf.

Of concern to India should be the proposed port at Jask, westward of Chabahar and next to the Strait of Hormuz, through which transit not only oil but the US Fifth Fleet based in Bahrain.

Thus, with existing control of Gwadar, its likely presence in Chabahar and now perhaps exclusive use of Jask, China presents maritime challenge to the United States and India in the Indian Ocean.

China’s continental influence now straddles from Himalayas to the Gulf. But the agreement may face domestic hurdles as it requires approval of Iran’s Parliament, dominated by radical factions. Former President Mahmoud Ahmadinejad called it a suspicious deal.

The leak of the 18-page document may be a deliberate Iranian ploy to warn the US and Europeans to rethink their policy of maximum pressure without any incentives and relief.

For China, this ambitious gambit supplements its Belt and Road Initiative and flows from its post-Covid aggressiveness in Hong Kong, South and East China Seas, and the Himalayas.

The US has retaliated by sending two aircraft carrier groups through Chinese-claimed waters in the South China Sea, rejecting Chinese maritime claims as bogus. Japan has pushed back around Senkaku Islands and India, caught unawares, has belatedly mirrored the Chinese buildup at the Ladakh LAC.

Although Iran says India can join the Chabahar railway project later, calculating perhaps that after the November US presidential elections, a more pragmatic leadership may emerge. It needs an India acting independently as a counterweight to China.

Meanwhile, a series of explosions ripping through Iran’s nuclear facility at Natanz and defence installations near Teheran indicates some new US-Israel cyber or kinetic action to hobble Iran’s nuclear programme.

But after the Ladakh standoff, a neo-Cold War alignment of China-Russia-Iran against the US and its friends and allies is emerging. India must think strategically without refracting Indian foreign policy through the prism of domestic politics.

Otherwise, the Chinese containment of India in South Asia and now through a wider arc that includes Afghanistan and the Gulf will only exacerbate.