The story of Victoria and Abdul: Raj reality vs the movie version

As anyone who has worked on any dramatic form knows, biographies don’t translate directly into films. 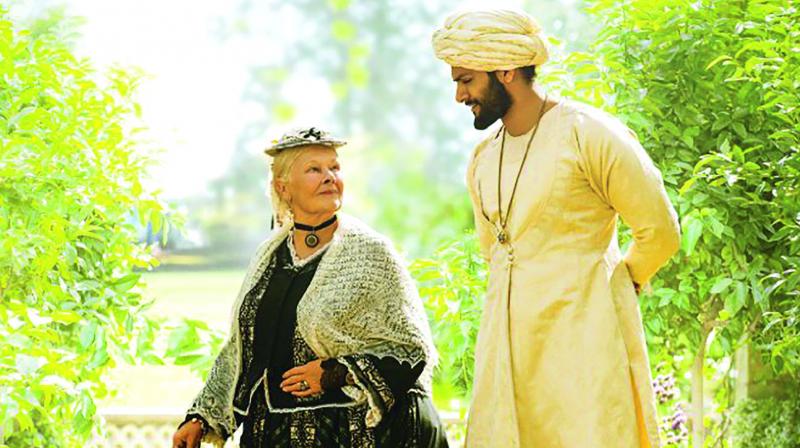 Victoria and Abdul is a nuanced retelling of Queen Victoria’s unlikely friendship with a young Indian clerk.

The film Victoria and Abdul, directed by Stephen Frears and starring the unsurpassable Judi Dench, premiered in London on Tuesday and will be in the cinemas soon. It’s richly advertised with posters depicting its two principle characters, Queen Victoria and her Indian servant and adopted favourite, the rascal Abdul Karim.

I have lived with Victoria and Abdul for the last 30 or more years. This isn’t a confession about my acquaintance with dead souls — I mean I have attempted in several formats, to write about this couple. At some point in the early 1980s Pakistani actor and savant Zia Mohyeddin asked me if I had heard of Victoria’s servant who insinuated himself into her confidence. I hadn’t. He urged me to research the subject and write him a TV play with him playing Abdul.

I began by reading biographies of Queen Victoria and found a few pages devoted to Abdul Karim and his curious interaction with the Queen and the royal household. There was no single book at the time dedicated to the story, if indeed there was a story to tell.

Zia hadn’t set me on the trail to further my education. I painstakingly (for me) pieced together Abdul Karim’s life. His father was an apothecary in an Indian jail, though he represented himself to the Queen as the son of the Surgeon-General of India. He was recruited as a domestic servant to an official of the Raj and then shipped, by one of India’s Viceroys, with another young Muslim man as a “gift” to Queen Victoria to serve at table in her palaces.

As anyone who has worked on any dramatic form knows, biographies don’t translate directly into films. A birth to death biographical account, with the exception perhaps of the life of Jesus Christ, is bound to put an audience to sleep. So a film about Mahatma Gandhi begins at the point where he is forcibly ejected from a South African railway carriage because he isn’t white. The trick is to find, in all its possible dramatic dimensions, the short story within the biography.

Zia and his selected TV director at Central Television, who then commissioned my script, said they saw it as a dramatic monologue for TV and they prescribed the limitations on length and budget.

I seized upon three elements from my research. The first was Abdul’s character. He was conceited, conniving, self-seeking and a deceptive individual who began his process of endearing himself to the Queen by playing on her curiosity about her imperial subjects, their country and languages. He addressed her respectfully in Urdu and was soon invited to teach her the elements of the language.  Second, his apparent rise drew the racial and class-based hostility of the royal household and even of Prime Minister Lord Salisbury and Edward, Prince of Wales. The third element was finding an intriguing plot. Abdul was acquainted with an Indian lawyer called Raffi-ud-din whom he attempted to get appointed as Britain’s ambassador to Turkey.

The resentful household set the intelligence services to research Raffi-ud-din’s background and found that he had spoken on rabidly anti-imperialist, anti-British platforms. It was the perfect starting point for palace intrigue and a plot —- but was it true or did I invent the twist?

I then wrote the monologue, Zia performed it, Central TV recorded it and Channel 4 broadcast it under the title The Empress and the Munshi.

That led to a theatre company asking me to turn it into a two-hander stage play which was triple the length of the monologue and was called Victoria and Abdul. It was performed in Britain and then in Mumbai and other Indian cities by vaunted stage actress Mahabanoo Mody-Kotwal playing Victoria.

Obviously, the story had caught the eye of several journalists and writers and some years after the transmission of the monologue and the staging of the play, a couple of books were published telling the story of Victoria’s Indian favourite. At the same time, renowned British-Indian director Gurinder Chadha discussed with me the possibility of a film on the subject.

I readily agreed and began work on it, going through a few drafts of the script which Gurinder and her producer Paul adopted. Gurinder was keen to recruit a famous American actress whose agent approved of the project, and Gurinder’s company sketched in a date depending on her availability. While we waited for this availability, Stephen Frears announced his project on the very same story. Before we could react to the announcement, the BBC agreed to fund Stephen’s film, which meant that my years of research and writing on Victoria and Abdul were, as they say “dead in the water”. It happens in this industry and I can only swallow my disappointment.

I will of course go and see Victoria and Abdul.  Since the material I unearthed through my research was not terribly detailed, I was compelled to invent very many aspects of the plot, scenes, dialogue and entirely fictitious encounters and even scandalous notices supposedly from the French press.

I expect Stephen’s screenplay is based entirely on his writer’s research but can’t help wondering, because of the scantiness of the primary evidence, if any of my inventions, of plot or scene or dialogue were used by the writers of the books on V&A and whether through them have found their way into the film. It would be one way of my words reaching the screen.

It isn’t the first time and won’t be the last that a writer or filmmaker has to face being gazumped. Now I’ve invented this character called Mickey Mouse and a ruthless secret agent called James Bond … and I’m sure no one will have the inventiveness to beat me to bringing these novel creations to the screen.