In the BJP’s reconstruction, the only political “legacy” that seems to matter in West Bengal is that of Partition. 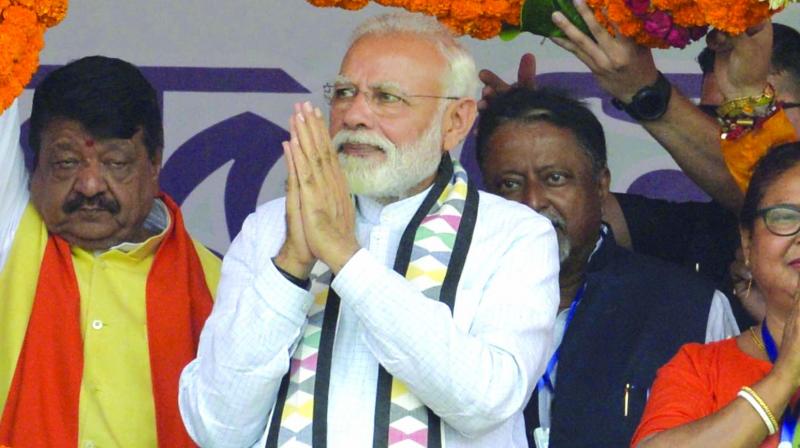 The 2019 Lok Sabha elections could be a turning point for West Bengal; not just its politics. It could be the end of the social contract among the people, just under three-fourths of whom are Hindus and the remaining 27 per cent of whom are Muslims, to keep the state out of the politics of communalism and protect its crafted image as a socially liberal, politically secular space.

Political parties across the spectrum arrived at a consensus that in the aftermath of Partition, West Bengal could not afford to engage in politicising identity, based on religion or place of origin. It now seems that West Bengal is prepared to play identity politics and this is in sync with the Bharatiya Janata Party’s concerted effort to bring the state within its embrace.

The BJP’s repeated promise that when it returns to power at the Centre it will roll out the implementation of the National Register of Citizens and the Citizenship Amendment Bill as a principal campaign pitch in West Bengal is a declaration that the era of consensus is over. The trope of a Hindu majority that will be swamped by the Muslim minority has become central to its appeal. It combines insecurity and fear, frustration and aspiration in a mix that makes it easy for Narendra Modi to talk about Mamata Banerjee as a sponsor of the side that wants to “break up India”, a “speed breaker” to development and basically an advocate of anti-nationals.

Enabling this potentially hazardous shift is the gradual appropriation and domination of the narrative of identity by the spectre of Partition and the phantoms that haunt the approximately six million people who came out of East Pakistan and sought refuge in West Bengal. In 1971, the population of West Bengal was 44 million. The “genocide” in Bangladesh pushed the next wave of approximately two million refugees across the border, some temporarily and many multiples more permanently, who then became settlers, initially illegal and then legalised by stealth. By 1981, West Bengal’s population was 54 million. In 2018, it was 100 million.

In the BJP’s reconstruction, the only political “legacy” that seems to matter in West Bengal is that of Partition. The narrative of dispossession is being worked by the BJP to infuse a sense of insecurity in segments of West Bengal’s population. Proof of citizenship problems affecting 23 lakh Hindus and 21 lakh Muslims in neighbouring Assam seems to have rubbed off on people who came and settled in West Bengal from East Pakistan after 1947.

Even though the status of this population is not open to examination, the anxiety of those who came after 1971 could impact the outcome in at least two seats in North 24-Parganas and Nadia districts. The BJP is hoping to seduce a section of Scheduled Caste voters in Bongaon constituency, a part of which is the stronghold of the Matua Samaj, by dangling citizenship “papers” to those who have lived in West Bengal for more than six years. It is the BJP’s “vote bank” creation, because it promises to delegitimise the “Muslims” and champion the Hindus.

Incorrect and incoherent as this storyline is, cherry picking its emphases from the political history of West Bengal after the division, it has hit on two strong sentiments that hold the Bengali imagination and self-constructed identity in thrall. Based on this reconstruction, Amit Shah has set a target of 23 Lok Sabha seats in West Bengal; that has now been pared down to the party will “hit” double digits in the number of seats it wins.

In West Bengal’s 70-year history, the BJP (or its earlier Jan Sangh avatar) has had no significant role. The other part is that it is not, as yet, though pretty close, to becoming a native of the place. It is a party that arrived in the state just about 20 years ago; it gained political credibility when Mamata Banerjee partnered the National Democratic Alliance governments under Atal Behari Vajpayee, starting in 1999. Its voteshare has risen and fallen, peaking with the Narendra Modi wave at 17 per cent in 2014 and dropping to just over 10 per cent in 2016 in the panchayat elections. In Amit Shah’s arithmetic, the 10 per cent is either good enough to win 23 seats or the BJP’s voteshare will see a vertiginous increase in 2019.

Oddly enough, neither Narendra Modi nor Mamata Banerjee is prepared to acknowledge that anti-incumbency can upset all their calculations. Just as much as the BJP’s campaign is built on another Modi “wave” hoisting it to a second term, Mamata Banerjee seems to think that the BJP will not do well in West Bengal because voters will choose her — the symbol of a “people’s government” by Ma-Mati-Manush, the Trinamul war cry in its spectacular triumph over the 34-year Communist Party of India (Marxist)-led government-over “them”.

West Bengal has always been an outlier in Indian politics. Will voters switch en masse over to the BJP? Will voters fall for the religion-identity bait? Will local anger against the Trinamul Congress push voters over to the BJP? Trinamul’s eroding appeal will be tested in constituencies with obviously weak nominees, like Moon Moon Sen from Asansol against Babul Supriyo, who almost did not get renominated. And the struggle to oust the BJP from Asansol just got tougher after S.S. Ahluwalia’s nomination from Durgapur-Bardhaman against the Trinamul Congress’ Sanghamitra Mamtaz. Denial that the Trinamul has built up its own political capital of anti-incumbency could affect the party in the border districts of North 24-Parganas, Nadia, Murshidabad and further north in Cooch Behar, Alipurduar and Darjeeling, as well as non-border districts of Birbhum-Bardhaman-Medinipur, where anti-incumbency could be the tipping factor.

The problem is that within the BJP and its fan club in West Bengal, no one can actually come up with the list of hits that will catapult the party into double digits. The majority of its star nominees are shape shifters, some from the Trinamul and an odd one or two from the CPI(M) and the Congress; Arjun Singh in Barrackpur, Nishith Pramanik in Cooch Behar, Bharati Ghosh, a former IPS officer and Mamata Banerjee’s onetime “daughter”, in Ghatal, Medinipur. 2019 will mark the assimilation of the BJP into the crowd of political parties in West Bengal, if it wins any number of seats over nine. If it does not, then it will show up its lack of organisational strength and leadership resources.