Some good deeds for good neighbours

There are some issues that seem to have moved to an unnamed list of items that are currently non-negotiable for India. 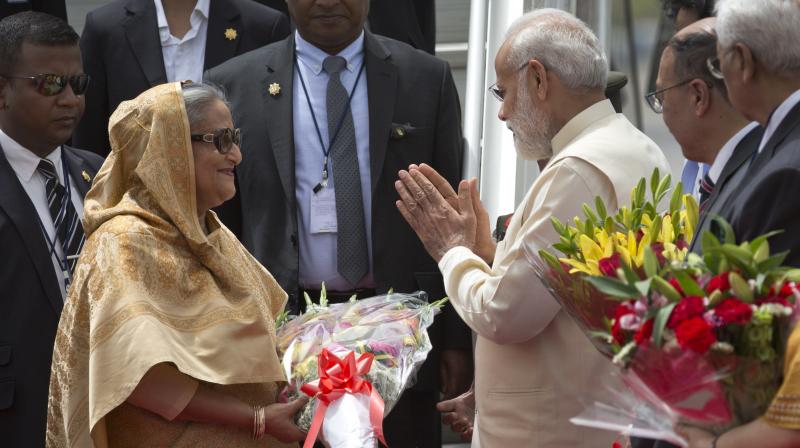 It should have been a straightforward equation, where one good turn deserved another. But that is not how relations between India and Bangladesh work in reality, for there are three Indian border states — West Bengal, Assam and Tripura — that have their own concerns, which makes it difficult for the Indian government to reciprocate Bangladesh’s good-neighbourly actions.

There are some issues that seem to have moved to an unnamed list of items that are currently non-negotiable for India. Bangladesh too has a list on which it needs India to act in a manner that demonstrates the successful negotiations have been held with positive outcomes for the smaller neighbour. The selection bias has deep political roots; thus in the popular imagination are the only real issues about which wins and losses ought to be calculated. This makes the otherwise trouble-free relationship between India and Bangladesh a noisy, fraught event, whenever a formal meeting between the two governments take place.

Sharing water resources is as emotionally charged an issue as cross-border illegal migration, with a history that goes back to the drawing of international boundaries, the construction of the Farakka Barrage, completed in 1975 and the birth of Bangladesh. Not all the goodwill and friendship in the world between Sheikh Hasina Wajed and Mamata Banerjee can shift West Bengal on its principal concerns over the sharing of water resources. Nor can the friendliness between Dhaka and New Delhi deflect the BJP from pursuing its politics of identity in both Assam and West Bengal, where illegal migration has changed the demographics of some border districts. Assam will not budge in its position that the only solution to illegal migration, that is identifying and deporting only Muslims, and sections of West Bengal’s political class have copy-pasted the agenda and made it their own.

There is a third issue for Sheikh Hasina, on which India needs to reciprocate and to be seen as doing so — hunting down Islamic terrorists and other such militants who have established safe havens in West Bengal and to some extent in Assam and the Northeast, after her crackdown against such operatives. Having gone after Islamic terror outfits with determination and courage, risking her political future, Sheikh Hasina needs India to dig out and deliver to her the fugitives who have taken shelter in India.

As this country’s only really friendly neighbour, the relationship between Bangladesh and India, particularly under Sheikh Hasina’s stewardship, is more important than ever before. For her, getting an agreement on the sharing of Teesta waters is critical to demonstrating to her constituency and the Opposition in Bangladesh that she has succeeded. This is, however, unlikely to happen. Therefore, finding issues on which India can be seen to be making good on its promise of being a friend have to be found to convince Bangladeshis that there were concrete achievements from Sheikh Hasina’s current visit to this country.

Sensitive to these concerns, New Delhi is not willing to risk putting the sharing of Teesta waters on the agenda when the chances are that West Bengal chief minister Mamata Banerjee will almost certainly torpedo any efforts to negotiate an agreement. In 2011, Mamata Banerjee pulled out of the delegation led by Prime Minister Manmohan Singh to Dhaka at the last minute, to India’s acute embarrassment, as she was unwilling to be a party to a Teesta water-sharing agreement. In 2015, though she visited Dhaka at the same time as Prime Minister Narendra Modi’s state visit, the Teesta issue was off limits as India was working on building an “internal consensus”.

There is still no internal consensus on the Teesta issue. It has not been taken off the list of expectations by Bangladesh, but Sheikh Hasina has not made the mistake of putting it on top of the page. India is clearly doing so, with the last minute entirely-staged consultations with West Bengal to show how hard it has tried to work out a consensus.

This pushes the rooting out of Islamic terrorists and militants who have fled Bangladesh and set up safe havens, primarily in West Bengal due to its locational advantages, to the top of the list of actions that India needs to promise to take during her visit. For both sides, the issue is highly sensitive, contentious and totally political. Islamic terrorists or militants are a common enemy, a problem that India and Bangladesh need to deal with. Therefore, finding a way of smoking out those who have taken shelter in India may be Prime Minister Modi’s best move. A democratic, liberal government in Bangladesh that will not play host to fundamentalist Islamic forces is in India’s best interests.

It is also a matter of reciprocating. Sheikh Hasina delivered long-sought Ulfa militants to India between 2011 and now, by acting on the extradition treaty by finding first Arabinda Rajkhowa and later Anup Chetia, who had taken refuge in Bangladesh and set up a network that ferried other militants in and out of India whenever the need arose. By handing over the Ulfa leaders Sheikh Hasina closed down the networks, which had an impact on the politics of Assam, helping the BJP sweep to power in 2017.

Unlike a water-sharing agreement, which needs the concurrence of West Bengal and the endorsement of Mamata Banerjee, going after militants does not require any cooperation from any state-level politician. If he quickly finds some, it will prove his sincerity and confirm India as a friend. It would also tangentially improve the BJP’s image with a new constituency of support that it is building in West Bengal, by trying to box in Mamata Banerjee and make room for its version of identity politics. It will also give the BJP leverage over her, by linking her to the illegal and unsavoury, an area where she is already vulnerable due to the scams — Saradha, Narada and Rose Valley — now being probed by the Central Bureau of Investigation, in which her party leaders and close associates are implicated.

There is much more depth to the relationship between India and Bangladesh, with agreements on the supply of power, easier trade, road and rail connectivity and of course cultural exchanges. Freeing trade and making travel easier would expand it further. The question is whether the action on the economic front and Islamic terror be enough to bolster Sheikh Hasina’s position in Bangladesh’s contentious politics and boost her popularity, where she faces an election in 2018? That is Mr Modi’s challenge.