Lessons from Gandhi that Modi could learn

Can Mr Modi understand that? Can his party? Can the RSS? The question is important because these entities are in power. 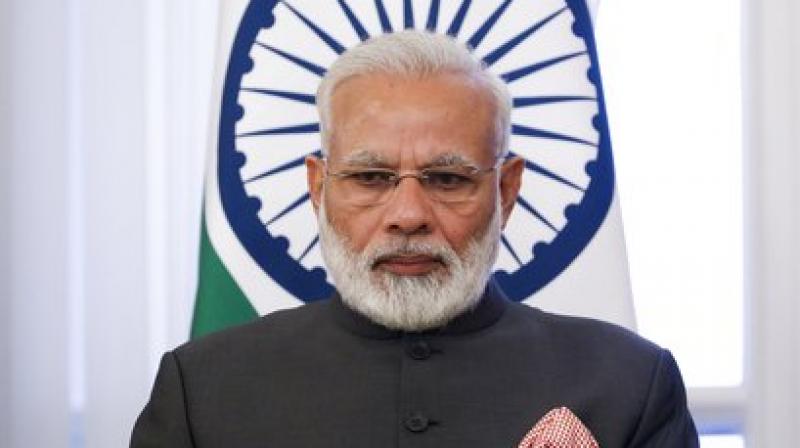 Narendra Modi took a lesson from his experience in London when he was last there as Prime Minister. So, in Washington recently, he flatly declined to take questions from the media. A joint press meet along with President Donald Trump was proposed by the American side and then taken off the menu.

Washington had suggested just one question each for the two leaders, not more. Evidently, the PM was keen to duck even that. He had been singed in London by a British reporter’s volley on a Hindutva matter.

In Mr Modi’s India there are too many things happening simultaneously on the Hindutva front, and “Sabka saath, sabka vikas” — the anodyne mantra promising development for all without discrimination, as though this isn’t what the Constitution mandates anyway — won’t fob off a determined press in the Western hemisphere.

Frankly, it won’t do so in India either. The Indian media has caved in by and large, scared further by bullying searches by the CBI, the Enforcement Directorate or income-tax authorities. But annoyingly for the government, the breed of questioning souls is not extinct in the press.

That’s why the PM has taken to being blasé, not risking a single professional interaction with the community of journalists in three years, not even to repeat the tired taglines of his administration with which his one-way communication through the radio, television and social media — or when he takes the mike, specially in front of overseas Indians audiences — are plastered.

Like it or not, that’s India’s democratic dispensation for you at present. The star witness for the defence refuses to take the stand.

And in the current context, the killing of the 16-year-old Junaid Khan from Haryana by a Hindu lynch mob, who first accused him of being a “beef-eater” and then thrashed and knife-stabbed him to death before tossing his lifeless body on to a railway platform at a wayside station, was oven fresh when the PM landed in the US.

The boy was returning home from Delhi, where he’d gone for Id shopping. Id-ul-Fitr, the big day of Muslims, was three days away. The crime appeared too shocking, too brutal, too unreal to be true, and yet, the stark truth could not be hidden, not even by those who disabled the CCTV cameras. The murder drew a gasp from anyone who heard about it, regardless of religious affiliation. But the Government of India heard nothing. Law minister Ravi Shankar Prasad was the exception. He alone responded with angered shock in a public statement, like a decent human being.

In his monthly radio broadcast “Mann ki Baat”, aired on Sundays, Mr Modi was cucumber cool. He pattered on about the sanctity of the Muslim fasting month of Ramzan, which culminates in Id. He praised a Muslim-majority village in Uttar Pradesh, which had built community toilets, spurning government funds. But on the cold-blooded murder of a young Muslim boy days before Id, he let maun vrat or silence prevail.

In this, he was being himself — one who sings paeans of self-praise and refers to opponents in indecorous and mocking terms, in season and out of season, within the country and when travelling abroad — and, studiously avoids making any mention of even deeply-disturbing happenings such as the killing of Muslims, the killing of dalits, the shooting dead of farmers by the police.

However, at Gandhi’s Sabarmati Ashram on June 29, the PM’s hand was forced. The night before, in cities across India, including in the nation’s capital, as well as at the renowned School of Oriental and African Studies in faraway London, ordinary Indians of many hues held massive protest rallies, calling these coordinated events “Not In My Name”, to raise their voice against the lynching of Junaid and the rising tempo of mob killings of Indian Muslims in the name of cow protection.

Unofficial figures suggest there have been as many as 20 such episodes in the past six months alone, and there is no known record yet of anyone facing punishment.

At last Mr Modi spoke at Gandhi’s ashram, but was again anodyne. He said killings in the name of “gau bhakti” (cow devotion) were “unacceptable”, and “will not be tolerated”. That’s it. Nothing about what action would follow, or holding the authorities responsible.

Last August, the PM had called the vigilante killers “anti-social”, giving us a new synonym for murder. The vigilantes are naturally unimpressed. Perhaps they know that Mr Modi does not mean business and that threatening noises are pro forma.

The PM should ask himself a single question: “Is this how he would have reacted if members of the majority community had been targeted and done to death in cold blood by gangs roaming free”?

For good measure, Mr Modi also said at Sabarmati Ashram that Gandhiji would not have approved of what was happening and urged us to follow the Mahatma’s teachings. Is this for real? If the PM means what he says, he will have to ask the RSS, the mother body of political Hinduism, to which he has paid allegiance since his teen years, to close shop. This is because the RSS and Gandhi are opposite poles, and those who assassinated Gandhi were influenced by the precepts of political Hinduism.

When the outrage of September 11 took place in America, the French gave the rallying cry, “Today we are all Americans!” This was a compelling expression of solidarity with the victims. It woke us up. If Gandhi were alive now, he would have gone on a fast, his hallmark act of atonement, and might have said, “We are all Muslims today!”

Can Mr Modi understand that? Can his party? Can the RSS? The question is important because these entities are in power.

Just after the Partition of India, when communal hatred had made blood flow, Gandhi would rush to the aid of the Muslim and ask if he felt safe. Many Hindus did not like this. The Mahatma told them, if he were in Muslim-majority Pakistan he would have rushed to the Hindu and asked the same question.

Compassion for the victim was Gandhi’s credo. This is also the essence of pluralism and democracy in the true sense. Mr Modi does not seem to know this from his training or temperament. Can he still try to learn because he is the PM?