I don’t think Trump will declare Pak as a sponsor of terrorism: Kanwal Sibal

Trump has large financial interests in the Arab world. 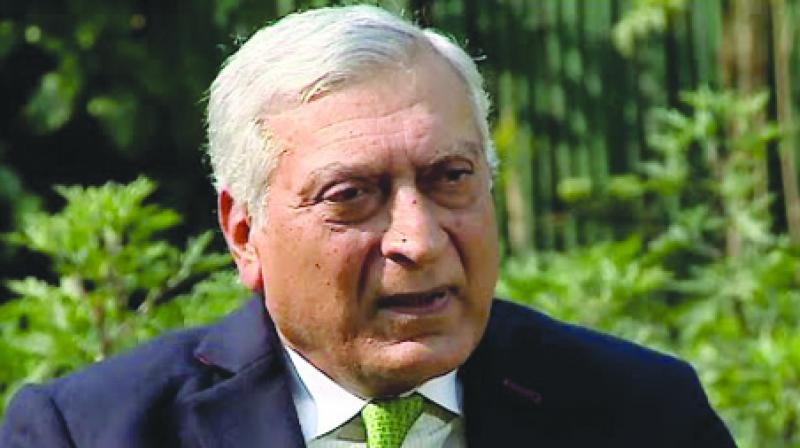 The election of Republican Donald Trump as the next US President has triggered a political storm there but there are many in India who are cautiously optimistic about India-US ties during his presidency. In this email interview, former foreign secretary Kanwal Sibal talks with Sridhar Kumaraswami on what Mr Trump’s victory indicates and its implications for India.

What does the victory of Donald Trump represent in the internal evolution of the United States? Is this a “whitelash”?
One would have thought that the election of Barack Obama — the first black President of the US and his re-election — represented a fundamental evolution of race relations in the country. Obviously, this was a misreading. There is certainly a white backlash in the country, fed by insecurities that the white working class of the country is prey to because of the loss of manufacturing jobs in America. If income inequalities in the US had not expanded, if economic growth in the US had picked up faster, if those unemployed had been re-trained for jobs in other sectors and so on, the white backlash may not have occurred to the degree it has. Now we see the surfacing of a strong anti-immigrant and racist sentiment amongst the white population. The country is divided today, but not entirely along racial lines. Many whites too are strongly anti-Trump for what he stands for. The issue is complex.

Hillary Clinton ran a fierce campaign but she failed to shatter the glass ceiling. Even after 240 years, the US is yet to have a woman President. What explains this?
Well, if the woman had not been Ms Clinton she might have won. It is Ms Clinton’s background, personality, her association with Wall Street money, the taint of corruption that damaged her campaign explains her defeat, not to mention the scandal of emails, the seamy financial side of the Clinton Foundation and funds received by it from the Gulf countries that allegedly influenced her decisions on the conflicts in West Asia.

The WikiLeaks exposure of her emails certainly damaged her. Beyond that many may have felt that her claims on the presidency was “dynastic” in character and that Bill Clinton might get a backdoor entry into the White House.

Do you actually expect the Trump presidency to place severe restrictions on Muslims entering the US or was that mere poll posturing?
He had begun moderating his posture during the campaign itself after his initial call for banning the entry of all Muslims into the US. He has signalled further modification of his position by removal of such statements from his website. But Mr Trump’s statements on entry of Muslims reflected a wider political mood in the country as many American states had voted against the entry of refugees from West Asia into their territory after the terrorist attacks in Europe by local Muslims and some by refugees from West Asia. Incidentally, Mr Trump has large financial interests in the Arab world. There is a conflict of interest there. Judging from what some Arabs are saying they are not too worried, believing that all what Mr Trump was saying was election posturing.

How do you feel things will pan out in South Asia? Is Pakistan expected to face the heat or will Islamabad’s politics of nuclear blackmail with the West once again prevail?
Mr Trump’s hard posture on Muslims and terrorism and some negative references to Pakistan during the election campaign could mean a tougher posture on that country’s support for terror groups operating against India and Afghanistan. Already, under Mr Obama, pressure on Pakistan on the issue of terrorism had grown, with some withholding of economic assistance and withdrawal of financial subsidy for the sale of F-16 aircraft. Such economic and military pressures may grow under Mr Trump. Our accusations against Pakistan for supporting terrorism against India may receive better hearing from him. Our counter-terrorism cooperation may further improve. But I don’t think even Mr Trump will be ready to declare Pakistan as a sponsor of terrorism or impose serious sanctions on it as the US did in the case of Iran or Russia. Pakistan’s ability to blackmail the West on nuclear issues is back-stopped by China. With that support continuing, I don’t foresee any change in Pakistan’s nuclear policies. As it happens, Mr Trump also has a more relaxed posture on the nuclear question, even suggesting that Japan and Saudi Arabia could go nuclear for their own defence.

Is a likely US-Russia convergence of interests going to make things much easier for India? Will the Trump-Putin bonhomie mean New Delhi will not have to worry about Moscow when it comes to growing ties with Washington?
Yes, if US-Russia ties improve, it will ease some pressure on India. Russia will have less reason to be suspicious of improved India-US strategic understanding if its own relations with the US become de-stressed under Mr Trump. This may also slow down the embrace of China by Russia, which again is to our advantage. By strengthening ties with China, Russia is enabling it to challenge the US even more strongly, thereby adding to China’s stature and its room for geopolitical manoeuvring, to the detriment of our geopolitical interests. One fall-out of improved India-US ties and more strategically oriented Russia-China ties is Russian overtures to Pakistan. Russia has also wanted to profit from growing Pakistani alienation from the US. This dynamic may also change.

How will the Asia-Pacific rebalance policy of the US change after the Trump victory? Should India’s strategy of dealing with China be reconsidered?
Mr Trump’s statements on the Asia-Pacific rebalance have been contradictory. He wants to generally reduce US military entanglements abroad. He wants Japan to contribute more financially for its defence by the US. He is open to Japan going nuclear to defend itself against China. At the same time, he seems willing to be more active in defending US interests in this region. If Mr Trump decided to pressure China, essentially economically and not militarily, then the joint strategic vision for the Asia-Pacific and Indian Ocean regions that we signed with Mr Obama would get hollowed out, the trilateral US-Japan-India cooperation will lose steam and the Quad, with the inclusion of Australia will be off the agenda.

The expansion of India-US naval exercises in the Indian Ocean will lose their geopolitical salience and the rationale for signing the Lemoa with the US will become questionable. This is the worst case scenario. I don’t think this is how things will pan out.

Do you anticipate any tensions with India over protectionist economic measures by the Trump presidency? Will India be equated along with China and Mexico?
We are ourselves not a manufacturing country and so US job losses in manufacturing is not on our account. China and Mexico are the targets of Mr Trump’s ire in this regard. Some outsourcing of US jobs has occurred in the services sector, and if Mr Trump tightens up on H1B visas our IT sector will suffer. On pending issues like the social security related totalisation agreement, on which we have not got satisfaction so far, we should not expect any change. On the other hand, Mr Trump’s criticism of trade agreements for damaging US interests and benefiting others will mean the dumping of TPP and TTIP agreements.