To fight terror, use every possible way...

The world must stand up and fight terror unitedly, otherwise its very existence will be under threat. 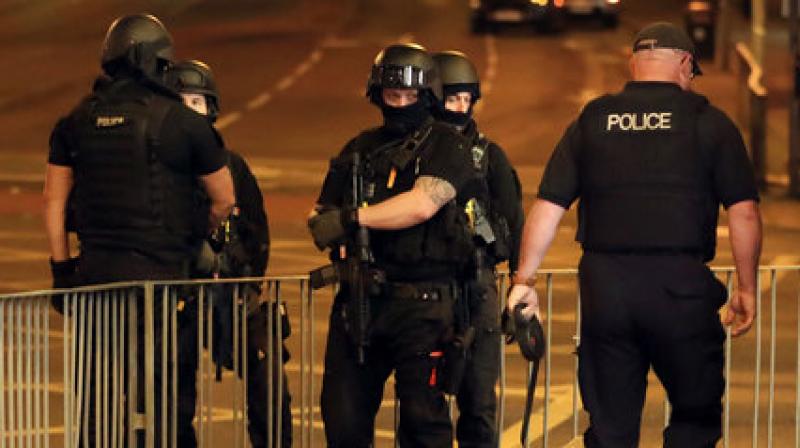 Armed police work after an explosion at the Manchester Arena in England (Photo: AP)

The appalling terror strike at a Manchester pop concert is yet another chilling reminder that destructive terrorism is today our worst enemy in the modern age. There is no escaping the fact that the price of freedom, as a way of life, must be paid as nations battle terror from varied sources, a lot of it flowing from Islamist radicals, many now drawing inspiration from the dreaded Islamic State (which has claimed responsibility for the Manchester attack). Whether the attack at American singer Ariana Grande’s concert was a lone-wolf one, as early indications show, or was planned by many, the truth is that countries across the world, including India, are the targets of forces inimical to modernity. From the pattern of attack and the event targeted, it is possible to surmise it was aimed at disrupting the way of life of a free society, much like the attacks in France where a sporting event was targeted.

Just two days ago, in Saudi Arabia, US President Donald Trump exhorted the Muslim world to join in the war on terror, but his way was to take sides with one branch of Islam while portraying the other — Iran’s Shias — as the enemy. This is questionable. The question is not which type of ideology or what branch of religion drives terror, but how to tackle the indoctrination many drive into the young aiming to destroy society to spread their message of hate.

To believe strikes against different viewpoints that aren’t commonly held by a majority are a modern phenomenon is to forget the lessons of history. Humanity has faced such battles earlier in religious wars or those driven by territorial ambitions. The destructive power of explosives makes tackling modern terror harder, but it would be too simplistic to blame this on Alfred Nobel for having invented dynamite!

The world faces a civilisational challenge. Combating terror requires the ability and willingness to use military power, electronic intelligence and other means as well to take the battle to those who wish to harm us. To quibble over using extreme tactics against terrorists can be self-defeating in a climate where a minuscule minority is out to destroy what we stand for in the modern world, trying to feed seven billion people and providing them a secure life. To use every means possible to ferret the terrorists out should be our aim if we wish to preserve our way of life, with the freedom to choose which way we want to live. If that means we have to make some compromises with our cherished freedoms, that is a price we will have to pay. The world must stand up and fight terror unitedly, otherwise its very existence will be under threat.