The case of J&K is going to be little different from that of Ladakh, at least for the foreseeable future 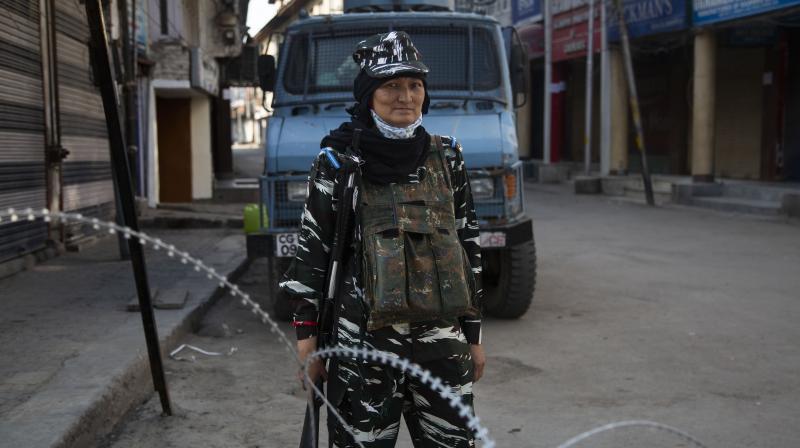 A paramilitary soldier stands guard by a road near the venue for India's Independence Day ceremony in Srinagar, Indian controlled Kashmir. (AP)

When the former state of Jammu and Kashmir was constitutionally reduced in August 2019 to create the two UTs of J&K and Ladakh, these centrally administered areas were given different characteristics: the first was to have a legislative Assembly while the latter was to have no legislature.

It now transpires that, in reality, the case of J&K is going to be little different from that of Ladakh, at least for the foreseeable future. Since June 2018, when J&K was brought under governor’s rule, it has not made any laws. It has been ruled with guns for all practical purposes. The aspirations of the populace have been quelled but not the threat of terrorism in spite of direct rule by the Centre.

The recent decision of the Union home ministry to amend the J&K Panchayati Raj Act, 1989 to facilitate the setting up of District Development Councils — to which direct elections will be held by the UT’s rural voters (ie those outside municipal limits), or roughly 70 per cent of the electorate — is strongly suggestive of the fact that the Centre has no plans for now to conduct long overdue Assembly elections.

The elected DDCs are designed to replace the earlier District Development Boards. This is akin to having municipal-type powers for the rural areas on a supra-block level template to construct roads, and manage utilities like power supply and water. There will be no legislative component. In this arrangement deputy commissioners are apt to be the masters of the manor. In an inversion of democracy, there will be lots of elections for the village folk — at the village, block and now district level — but the boss-man will be a bureaucrat.

If there was an underlying naivete to such a scheme, it will rightly be called idiotic. But there is no innocence or good-faith action here. The very idea is to keep the present political class on ice in the Centre’s idea of “New Kashmir”. The whole lot who swore by India’s Constitution in practising their politics was put behind bars, the same as those who didn’t. Now they are out. But they have to be kept away from political action. The BJP-driven Centre is hell-bent on creating a cadre of political leaders out of plough-hands.

This is the shape of the political challenge before J&K’s political parties. While the recently released Kashmir valley politicians have resolved to fight through constitutional means for the restoration of J&K’s autonomy, they will be short-sighted not to show an active interest in DDC elections, if nothing then to game the system.

Big Brother may seek to demoralise them — as the case of the intensive questioning of the 84-year-old NC leader Farooq Abdullah by the Enforcement Directorate shows. An old allegation of siphoning money from J&K Cricket Board funds has been dug out. The real purpose stands out there in plain sight. More arm-twisting of politicians cannot be ruled out.