Opinion   Edit  15 May 2019  A paralysis of thought is marginalising Left
Opinion, Columnists

A paralysis of thought is marginalising Left

The other memory that may remain is a sub-plot — the rise of the BJP and the decline of the Left in West Bengal. T 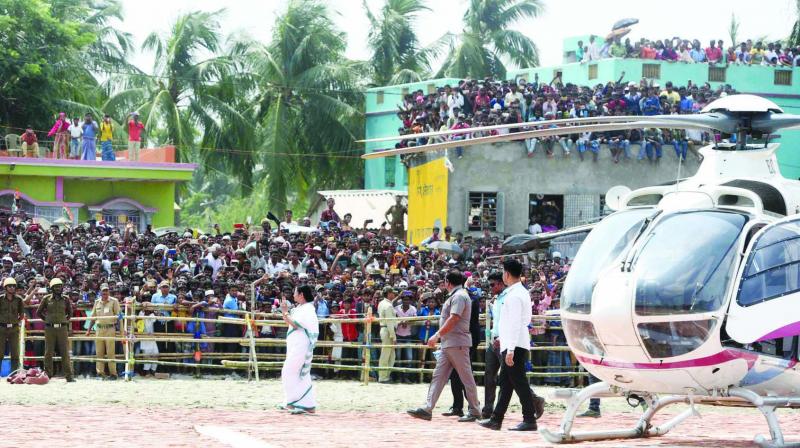 At a moment in history, when the description of a particular agenda in politics as the “Left” is staging a revival in polities that have jeered at Leftists or have jailed them as “Commies” in the past, dismissing them as radical and marginal troublemakers, the survival of the parliamentary Marxist Left personified in the Communist Party of India (Marxist) is in question in India, more specifically, in the once impregnable red bastion of West Bengal. Will the party dwindle to a “signboard,” as it struggles to handle the onslaught of the BJP and the confrontations with the Trinamul Congress?

The best remembered part of the 2019 elections could be the uninterrupted bombardment by the Trinamul Congress against the BJP, of Narendra Modi spewing fire and venom at Mamata Banerjee, which she returns with interest. These exchanges of fire have served to hoist the BJP to the position of the undisputed challenger to the Trinamul Congress in West Bengal.

The other memory that may remain is a sub-plot — the rise of the BJP and the decline of the Left in West Bengal. The enlarged image of the BJP in the Lok Sabha elections is just that; an enlargement of its actual or estimated strength in the state’s politics, because its real size and strength are still unknown. The results on May 23 may sort out the confusion about what is the BJP’s real strength in West Bengal — has it pushed out the CPI(M)-led Left Front from its number two slot, or is the BJP now number three?

In the 2016 elections that Mamata Banerjee won with a huge majority, the BJP’s voteshare was just under 11 per cent. The CPI(M) and its partners in the Left Front bagged 26 per cent votes, outstripping the BJP by several lengths. But, by 2018, when the panchayat elections were held, and this was one of the more violent and contentious elections in West Bengal’s history of turbulent hustings, the BJP had emerged as the party with the second highest number of representatives at the grassroots, surpassing the Left.

The question is: Where does the Left, more specifically the CPI(M), stand in West Bengal’s changing politics?

And where is it headed? The question itself provides a clue about the difficult times that the CPI(M)-led Left is going through, as it struggles to stabilise its strength and overcome its weakness.

That is not to say that the CPI(M) is not opposing or confronting the BJP as the principal enemy in West Bengal and of course across the country. It is. But it is a weak fight. The marginalisation of the Left and its voice in the anti-BJP Opposition is in part its inability to heal the party in West Bengal and begin staging a comeback.

The CPI(M) would be probably better off examining why its voters made what was a rational choice for them, voting BJP. It is weaker in 2019 than it was in 2016. It is fully aware that chunks of its voter base swung to the BJP in the 2018 panchayat elections, in which the incoming saffron tide pushed the party into second place at the grassroots. As a consequence, the CPI(M) had to axe over a hundred party members. And the confession of at least one of its candidates in this election points to the internal problems of the party — that he is working to bring back voters who had switched to the BJP in 2018. These voters are not politically naïve. The missing self-critical appraisal required to investigate the reasons for its declining strength will indicate a crippling loss of confidence and a paralysis of thought.

Unless the CPI(M) puts up a strong fight, including facing up to violence, to prevent the strategic destruction of the political consensus to maintain communal harmony and uphold secular values in West Bengal, it will probably further marginalise itself, because it would lose credibility as an alternative in politics. For sophisticated voters, the CPI(M) may still be, with all its faults and weakness, a symbol of difference and a choice signifying opposition to Hindutva and neo-liberal, neo-imperialist policies, but at the grassroots, it needs to articulate a simpler message and practice that has meaning for the poor, the backward and the marginalised.

The official version of the steady decline of the Left, by the CPI(M), has an unreal feel. On the one hand, its retired but best-known leader, with an impeccable reputation and greater popularity than the current leadership, Buddhadeb Bhattacharjee, has been outspoken on the perils that face the “party” in the state. He has warned the CPI(M)’s support base and cadres that voting for the BJP is like jumping out of the Trinamul frying pan into the saffron fire. On the other, the present leadership seems to be groping for ways in which it can reconnect to the masses.

The reiterations by Mamata Banerjee that the CPI(M) and the Congress have encouraged the BJP and assisted its growth in the state reflects the concern that other parties must pull their weight to retain and restrain voters from choosing the BJP. The CPI(M) and the Left have countered this by accusing the Trinamul Congress of working as the “Trojan horse” of the BJP. Good as this rhetorical flourish may sound, politically it makes very little sense in the very real crisis that has been precipitated by the rise of the BJP. The fact is that the Left has lost both voters and leaders.

The 21st century challenges are different from that of the last millennium. What Sabarimala was to the CPI(M) in Kerala was what Singur-Nandigram was to the party in West Bengal in 2007. It was a confrontation of opposing ideologies that challenged the social and political base of the party.

The party in Kerala is energetic, popular and successful, even after it was involved in a fight that was danger-ous enough to have derailed its politics, because it plunged the CPI(M) into a confrontation over religious practice and change on over Sabarimala issue. The same party in West Bengal is like a wounded and endangered creature; neither able to fight nor fly away.