The government’s propaganda machine, however, is jealous of the confident, new farmer 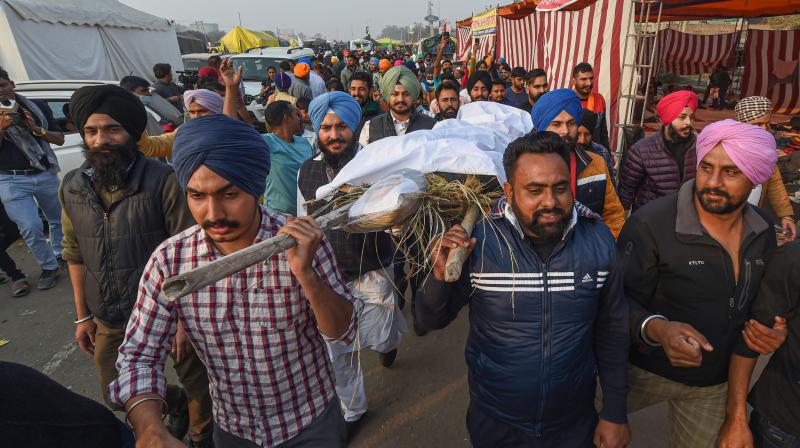 Farmers carry an effigy during their ongoing 'Delhi Chalo' agitation against the new farm laws, at Singhu border in New Delhi on Sunday, December 6 (PTI/Manvender Vashist)

It’s all in the ‘mindset’. The farmers’ barricade at the capital’s borders that has entered its 16th day and is stubbornly refusing to go away, to the chagrin of the Narendra Modi government, is now beginning to expose the hypocrisies of the ruling party and its constituents. And in so doing, starting to embarrass them.

On December 10, Human Rights Day, Bharatiya Kisan Union leader Joginder Singh Ugrahan’s colleagues had held posters of jailed human rights activists arrested in the Bhima Koregaon case. It drew a reaction from the usual suspects — this time in the shape of Union minister Piyush Goyal — who tossed out at them his party’s overused salvo — that of being “hard Left” and “antinational”. However, the former soldier was nonchalant.

Mr Ugrahan, whose organisation recently moved the Supreme Court to have the three contentious farm laws repealed, has a question for the government. Is the government afraid to engage with him on the points that he is making regarding the laws?

For whatever they are worth, Mr Ugrahan can’t very well be expected to be punished for his beliefs, or the positions that he has taken on these matters either, empowered as he is to have done so by dint of Articles 19, freedom of expression, and 25, freedom of conscience and religion, of our esteemed Constitution.On the flipside, Mr Goyal and his supporters can’t properly be said to have indulged in whataboutery either, because it is socialists who most explicitly uphold the humanitarian cause and have, historically, done so for the longest. The role of the Opposition is well-known — one has to be on the Left to fight for the right.

As evidenced by the tweets sneering at fox nuts and foot massages at the protest venue, the government’s propaganda machine, however, is jealous of the confident, new farmer. For them, the kisan bhai, and he needs must be a bhai, not a bhabhi nor a behen, even as 60 per cent of India’s subsistence farmers today are female, with the male having the social sanction and their family’s will to migrate in search of more paying work, so farmer’s rights are equally women’s rights, is cast in the image of the emaciated ploughman. They are stereotype-bound and lack both ideas — for actual agro-reform — and imagination.

But there is hope yet. One way to avoid more embarrassment is to learn from one’s mistakes.