Trump shakes up Nato, gets allies to pay more

Under an earlier Nato understanding, member states are to raise their military spending to two per cent of GDP by 2024. 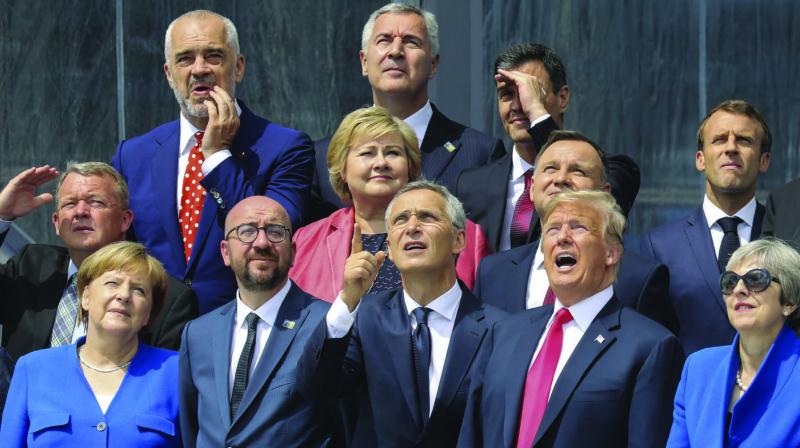 For all the tremors that were expected with US President Donald Trump’s bromides against old allies, particularly Germany, Europe’s largest and strongest economy, the just-ended Nato summit in Brussels (July 11-12) seemed a relatively conventional affair. One can reasonably conclude that the Euro-Atlantic alliance is safe and well.

The Brussels Declaration released Thursday attests to no ruptures. Indeed, it speaks of the “vital trans-Atlantic bond” and strikes at Vladimir Putin’s Russia, just before Mr Trump heads for Helsinki, Finland, on Monday for a summit with President Putin, to the chagrin of his Western allies, for triggering instability and spreading insecurity.

On the opening day, Mr Trump launched an unprovoked broadside against German Chancellor Angela Merkel, saying her country was “captive” to Russia as it bought energy from there. Ms Merkel, currently weakened in her domestic politics, didn’t return fire in the same tone, not presuming to speak at this moment for all of Western Europe. But she did convey clearly that Germany was united and made its own decisions.

After the US President’s sulphuric opening gambit, it appears that he has succeeded in making the Europeans agree to raise their military spending as a proportion of their country’s GDP. He also had a relatively calm bilateral meeting with Germany’s leader, where they even discussed trade, a matter which has rankled the American President as Germany has a surplus over the United States.

The US President’s basic point is that the Europeans should pay more for their defence, and not place a disproportionate share of the burden on Americans. However, against who are these prospective war preparations? Is Russia an enemy that is about to launch a war against the Nato powers even though it has taken firm military steps to protect its periphery against creeping Nato manoeuvres in states that were once part of the USSR and are on Russia’s doorstep?

While the Brussels Declaration sticks to Nato’s traditional anti-Russia stance, Mr Trump, against much domestic opposition as well as serious concern among Western allies, has shown bonhomie toward President Putin and will be in Helsinki on Monday. It remains to be seen if the American leader throws a bridge to the Russians, or maintains the state of permanent hostility to Moscow to burnish his Western credentials? The Nato summit showed the military alliance will endure, but will its relationship with Russia be as hostile as in the years of the Cold War?