The Congress has alleged that its MLAs were offered a sum of Rs 15 crores each to resign their seats. 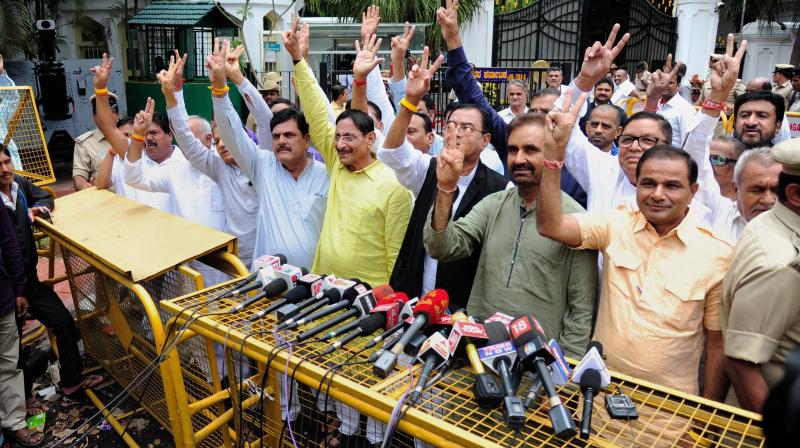 Gujarat Congress MLA's comes out of Rajbhavan after meeting with Governor in Bengaluru. (Photo: PTI)

The Rajya Sabha election from Gujarat is due on August 8, and the strange goings-on preceding it have caught national attention. A very unusual occurrence in the recent chain of events has been the case of 44 Gujarat Congress MLAs holed up in a Bengaluru resort calling on Karnataka governor Vajubhai Vala, who has risen up the BJP ranks and is a former Gujarat Assembly Speaker.

Obviously, Mr Vala has no powers to be of any help to the Congress MLAs from his state. Therefore, it appears the MLAs went to see him to communicate to the BJP leadership that they stayed united and also to show that they were in Bengaluru of their own will. Some reports had claimed they were brought to Karnataka against their will.

While BJP seems in absolute political control in Gujarat, the Congress had 57 MLAs, which was more than adequate to ensure the re-election of Congress president Sonia Gandhi’s political secretary Ahmed Patel to the Upper House of Parliament. But the BJP has tried a trick to trip up the Congress. Half a dozen Congress MLAs simultaneously resigned as if on cue and one of them, Congress’ former chief whip, is now wearing BJP colours and has entered the fray for the Rajya Sabha in a bid to have Mr Patel defeated.

The Congress has alleged that its MLAs were offered a sum of Rs 15 crores each to resign their seats. If true, this is an inducement to defect and is a gross distortion of democratic processes. Therefore, it is being said that those who left for Bengaluru did so in order to evade the BJP’s blandishments and fears of being kidnapped.

The fate of seven MLAs, who didn’t go to Karnataka, is unclear. If they have indeed been “won” over by the BJP, they needn’t even resign. Under the latest Supreme Court ruling, they can oppose Mr Patel just by pressing the “Nota” button. It will be interesting to see the result of the polling on Tuesday.

It is ironical that the 44 MLAs who fled to Karnataka, due to probable BJP manoeuvres, have been criticised by the saffron party for not bothering to visit their constituencies at a time of heavy floods. However, the vehicle of Congress vice-president Rahul Gandhi, who had gone to express solidarity with the flood victims, was attacked in Banaskantha on Friday and Mr Gandhi’s personal security officer was injured. A BJP worker was reportedly arrested. Violence of this nature meant to intimidate Opposition leaders deserves to be highly condemned.

It seems the parties’ political manoeuvres — in this case the BJP and Congress — have taken precedence over the Gujarat flood situation. This is a sign of underdevelopment and a blatant disregard of the people’s interests.