H1-B row, hate crimes a blip on close US ties

New Delhi has a delicate task of balancing ties even as it takes up the issue of hate crimes. 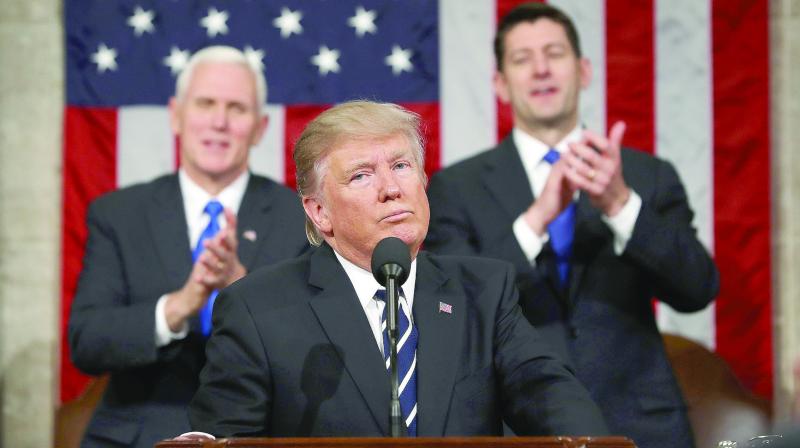 India could be wondering what the Donald Trump administration may be upto as conflicting signals are emerging from the United States. This is evidently a time of great uncertainty for the world as President Trump resets ties with allies, but India was stunned even more by the suspension of expedited processing of H-1B visas. This move, hours after India’s foreign and commerce secretaries claimed to have made headway in convincing Team Trump that the H-1B issue involved trade and services and shouldn’t be clubbed with the immigration restrictions being planned, is particularly worrisome as there’s an obvious disconnect between the spoken word and action. It is clearly aimed at constricting the guest worker programme, that was useful for Indian IT firms to put skilled workers onshore with US clients to further their valuable offshore work for American firms.

The Trump administration says that by scrapping quick processing — which affects industries ranging from IT to healthcare, with 15,000-odd doctors also serving rural communities through H-1B visas as well as students — it’s only trying to reduce overall H-1B processing times. With 85,000 such visas due to be issued this year and a time lag of six months in the lottery process, it’s going to be a specially trying time for the $150 billion Indian IT industry, with giants like TCS and Infosys dependent on these visas. The US argument against the programme stems from fear of backdoor manipulation of commerce by “bodyshopping”, resulting in a drop in real wages in the US for its workers. It is clear New Delhi has failed to convince Washington of a special position in sending skilled workers to keep the wheels of the new economy ticking in America.

The issue must, however, be seen as part of a larger canvas of social change, with a fair dose of xenophobia injected into Donald Trump’s America by the swing to rightist populism. This is clear from the kind of racially motivated attacks on Indian-origin immigrants forming a discernible pattern in recent weeks. As attacks on Indians are only highlighted in the Indian media, it’s hard to tell how much of an effect recent events had on attacks on international migrants in the US. Indians are, however, particularly targeted as they are seen as very successful immigrants who have made a life in their adopted land even as inner city communities are seen to be suffering from lack of opportunities. New Delhi has a delicate task of balancing ties even as it takes up the issue of hate crimes. The defence relationship is now the key aspect in these times of closer cooperation marking improved Indo-US ties, even if India must be seen taking a stand over people of Indian origin facing discrimination.