Uncertainty ahead as J&K enters a new era

It is simply not just due to the fear of militants targeting people venturing out to begin leading “normal” lives. 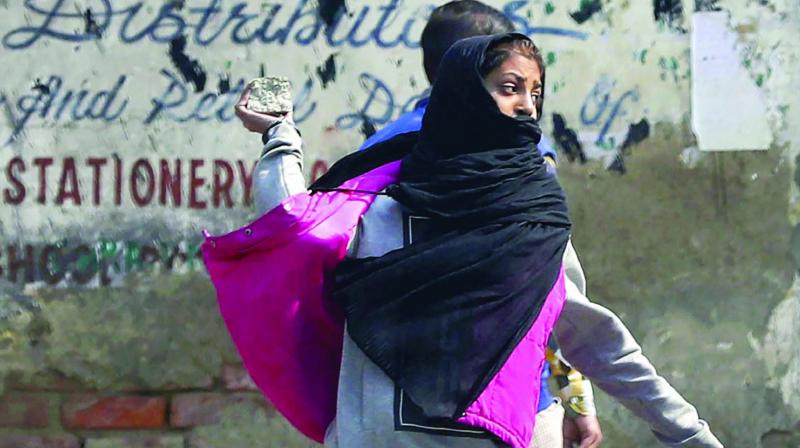 A girl throws a stone towards policemen during a protest in Srinagar, on Tuesday. (Photo: PTI)

The cessation of Jammu and Kashmir’s statehood on October 31 and the simultaneous termination of its special status symbolically underscored by its separate flag and constitution, on a day observed since 2014 by this government as Rashtriya Ekta Diwas, or National Unity Day, to mark Sardar Vallabhbhai Patel’s birth anniversary, setting it off against the Rashtriya Sankalp Diwas, or National Pledge Day, in memory of Indira Gandhi on the anniversary of her assassination, is packed with ironies. It makes little difference which observance is given greater importance or ignored, because both are aimed at reminding people about the need for harmony.

The midnight of October 31 and the 24 hours that followed, which saw high-voltage chanting of unity by ruling party leaders, Prime Minister Narendra Modi downwards, will eternally have a paradoxical ring to it because it coincided with the formal splitting of the state into two Union territories. For people of the state, especially those in the Kashmir Valley, this day will mark less the beginning of a new future and more the end of a past held dearly. It is indeed a tragedy in the nation’s life that something which is an occasion for joy and celebration in most parts of the country, is a sad day for those whose fates were altered. This development is also against the principle of giving people greater control over their destinies which guided various instances of states' reorganisation. That the government feels shame-faced over the decision to strip J&K of its statehood is evident in the repeated assertions that the restoration of statehood was possible in the foreseeable future provided people “behave” and stay away from violence.

The Centre's decision to culminate the first phase of the long process initiated on August 5 with the nullification of Article 370 on this day was aimed at broadcasting a political message — the Sardar is, after all, credited with integrating 565 princely states into the Indian Union and the termination of J&K's separate constitution and flag marks a “complete integration” with the Union, thereby marking a major development in the Iron Man's agenda. Yet, because there is no mistaking that this “gain” for the India has come alongside an acute “sense of loss” of people, the road ahead is far more uncertain. The Centre's move may result in administrative fusion of the region with the rest of the country, but in civilisational terms the alienation will become deeper and more difficult to counteract. It requires no great knowledge of modern statecraft to conclude that high significant levels of social angst threatens the peace and triggers security worries.

This was proven in ample measure in the last few days as violence escalated and a series of attacks in the Valley took place against non-Kashmiris and so-called “outsiders”. This sends ominous signals to belligerent supporters of the BJP's version of nationalism within industry, who pledged investments in the newly-created UT. In the absence of communications and travels curbs in force for those seeing these developments from a prism different from the ruling party's, few believe the official narrative that signs of protests are solely due to the curfew imposed by “militants”. Indeed, reports and pictures circulated during the ill-advised visit of members of the European Parliament — which not only became a PR disaster, but also pointed at fissures within the government, and showed how it works outside established systems — indicates that the anger in the Valley is high. It is simply not just due to the fear of militants targeting people venturing out to begin leading “normal” lives.

The moot point, however, is that the Centre is not interested in ensuring “normaility” within the Kashmir Valley but is keener to showcase its muscular handling of the issue. There is little concern that there is little evidence of “acceptance” in the region of its decision. The emphasis in more on proving that its plan has continued without much opposition and that it's just a matter of time before the new UT becomes a fully functional administrative unit.

The government’s preoccupation with running the new UT of J&K with an iron hand, giving scant consideration to people's ambitions and aspirations, is evident in its choice of G.C. Murmu, a serving Indian Administrative Service officer, as its first lieutenant-governor. The Gujarat cadre IAS officer from Odisha’s claim to fame is reportedly being a loyalist of Mr Modi and home minister Amit Shah. As a close aide of Mr Modi while he was Gujarat chief minister, Mr Murmu reportedly played a significant role in devising a legal defence for Mr Shah in the Ishrat Jahan fake encounter case. His name also surfaced in the Snoopgate controversy in 2013. L-Gs are usually former bureaucrats, police officers or defence personnel but are normally nominated after retirement to add gravitas to the office. That this convention has not been followed indicates that the emphasis is on loyalty and confidence on competence and the certainty of Mr Murmu remaining true to the political brief till the last letter. This, however, resulted in the advisers to the J&K government bowing out as they were senior in the hierarchy to the new L-G.

For years, Congress governments prior to Indira Gandhi’s accord with Sheikh Abdullah plied J&K with carefully selected client politicians who milked the state’s resources in return for political loyalty. It is a contradiction that the BJP accused a handful of politicians from select dynasties of diverting state resources for amassing personal wealth, but has chosen to follow the same path of identifying and foisting “client” politicians on the territory’s hapless people. The true political support of the BJP in the entire region can be assessed by a careful reading of the Block Development Council election results, which showed no or scanty support for the BJP across J&K. Since 2014, the BJP’s Kashmir policy was fashioned with an eye on its core votebank elsewhere in India. Even after its decision of August 5, there has been no change in this approach. For the people of J&K, there appears to be no escape from the dark abyss they had slipped into decades ago.