Balkanisation and the secret pull of astro TV

It was a magnificent picture, awe-inspiring and sometimes terrifying to us childen, for it taught us how little we really controlled in our lives. 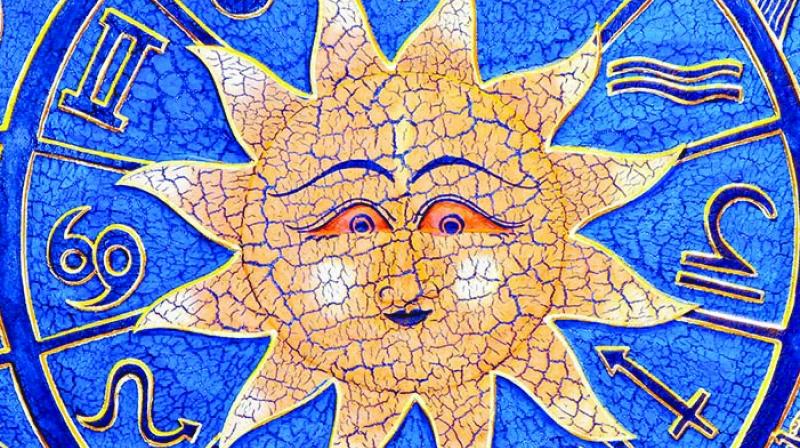 The astrologer left no questions unanswered, but always offered at least a palliative when the answer was bad.

Near the beach where I live is a little resort that advertises bed and breakfast... and the beach, of course. One of last week’s visitors was a thirtyish, dark-skinned man with curly hair and bright eyes, in the t-shirt and baggy shorts of the tourist, who sat on the stump of a fallen tree one evening watching a video on an iPad. Passing behind him on my regular evening walk, I slowed down to see what he was watching. It was, surprisingly, a Pakistani TV astrology show.

Seeing those thirty seconds’ worth of the show brought a flood of memories of the last time I saw an astrologer at my ancestral house, in the mid-1960's. Back then, you had to get off the road and walk half a mile through fields and along a path of beaten earth to get to the house. The astrologer, who came at my grandfather’s invitation, walked up the house at about four in the afternoon, followed by a factotum carrying his luggage, which consisted clothing and other essentials, besides the tools of his trade, palm leaf scrolls and cowrie shells and almanacs, all in a neat trunk.

He rested in the large, cool entrance hall for a while after his journey, had some tea, bathed in the pond by the nearby temple, and disappeared into the room allotted to him for a brief snooze. He emerged after sunset, when the lamps had been lit, for electricity had not yet arrived, and was served a festive dinner, of which we children too partook joyfully, for there was payasam, or kheer, afterwards.

After dinner, the extended family gathered for the reading. In  the centre of one wall of the entrance hall, on a durrie spread on the floor, sat the astrologer, with his factotum standing by, his durrie lit by four hurricane lamps, for you couldn’t read palm leaf scrolls in poor light. Members of the family sat in a semi-circle on grass mats on the floor, ladies to one side, gents to the other, children scattered about the front, and grandfather in the centre in an easy-chair.

The astrologer had a pile of palm-leaf scrolls and notebooks — of late, palm leaves had begun to give way to notebooks for writing horoscopes - and began with the newest horoscope, which he had prepared only days ago, of a child born to a cousin a month previously.

He read out the baby’s star chart, and the periods for which various stars would influence the baby’s life as she grew up, when she would probably marry and what gifts she had, occasionally answering questions asked him Granddad. I was surprised at how Granddad seemed almost respectful of the astrologer: as a rule, everyone in the house and the neighbourhood was terrified of the old man. But astrologer treated Granddad much like anyone else, and that sent him up a notch or two in estimation.

As the astrologer warmed to his task, he turned into a storyteller. He conjured up visions of planets and stars clashing in the heavens, and dust from those conflicts changing our little lives, bringing about births and marriages and serendipity and disaster. It was a magnificent picture, awe-inspiring and sometimes terrifying to us childen, for it taught us how little we really controlled in our lives.

And then came the regular questions about horoscopes. Uncles and aunts and cousins came with their questions, about whether such and such a marriage would work, or whether it was time to sell a bit of the farm, or whether the deity at some nearby temple had been offended. Occasionally, the questioner’s concern would show, when the questions were about somebody’s health or financial situation. The astrologer left no questions unanswered, but always offered at least a palliative when the answer was bad.

The best bits came at the end, the appeals to the astrologer’s inner oracle. These were questions outside the horoscopes. The astrologer asked the questioner to hold the question in his mind while he scooped up a handful of cowrie shells from a pile on his mat and tossed them onto a clear bit in front of him. Then he counted the fallen shells, separating them into little heaps, muttering all the while. And then, after a prayer, he’d recite the answers, first some Sanskrit slokas, and then his interpretation of those slokas.

By this time the children were half asleep and even the men were nodding off. Granddad handed the astrologer a mundu, a bundle of paan leaves and some money, and that signified the end of the evening’s entertainment. And pure entertainment it was, and besides it kept the gossips busy for weeks afterwards.

By this time sun was dimming and it was time to go home, so I turned back. A few minutes on, I passed the same man, still watching a video, but this time of an Indian astrologer, speaking Hindi. One of the few benefits of growing old is the freedom to intrude on young people, so I sat by him and said I’d seen him watching programmes on astrology. “Are you worried about something?” I asked.

“A little, yes,” he replied. “War with Pakistan, things like that.”

“I wondered,” I told him, “Otherwise you wouldn’t be watching those astrology shows.”

The sun was down and it was time for me to go home. As I walked slowly home in the gathering dark, the thought uppermost in my mind was this: The more things change, the more they stay the same.