If the BJP really meant to do what it had declared — one nation, one vote — the best time to get started would have been now. 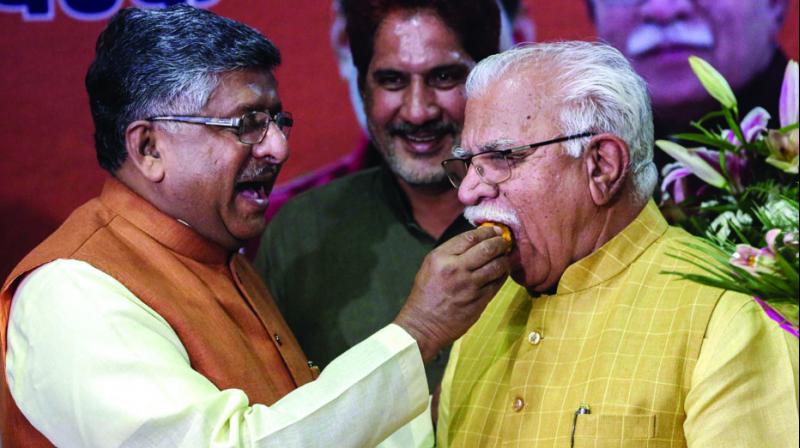 The Bharatiya Janata Party’s efforts after October 24 indicate it is in survivor mode, salvaging what was a natural disaster. From the wreck of the castle the party had built, albeit in the air, it has been working to ensure that the states of Haryana and Maharashtra are headed by its hand-picked chief ministers, Devendra Fadnavis, who has not yet been confirmed, and Manohar Lal Khattar, who has, for the second time.

Some inkling of what could be the worst-case scenario must have been there. In hindsight, it was entirely sensible of Amit Shah, J.P. Nadda and Prime Minister Narendra Modi to reduce the risk of a snub by not putting all the party’s eggs into one basket. If the riskier and therefore politically dangerous decision had been to start the post-Lok Sabha spree of state elections by lumping together all the states due in the next six months, it would have been more difficult for Mr Shah and Mr Modi to save face by declaring the Maharashtra and Haryana verdicts as a victory, an endorsement and a confidence vote.

That it was no such thing is self-evident. The verdict failed to give the BJP the single party majority that had declared it would get in both states. Instead, there is a hung legislature in Maharashtra with the Shiv Sena claiming that it has the “remote control of power” in its hands. In other words, the BJP’s nose is being rubbed in the dirt for its failure to convert the 164 seats it contested into a single-party majority. Hubris is being chased by Nemesis.

In Haryana, the BJP scrambled to get together with the infant Jannayak Janata Party, the very existence of which contradicts the Shah-Modi plank that probity and principles in political life matter and that their personal success confirms the possibilities of the ordinary man coming up through the ranks in the hard way, instead of becoming leaders by inheritance. Earlier in October, Mr Shah had waxed eloquent on the difference between the Congress, the Nationalist Congress Party and the BJP. He was reported to have asked: “Is there no talent outside the family? Such “parivar wadi” parties can’t work for the welfare of the state and the country.”

The swiftness with which principles have been abandoned for practical reasons of installing two chief ministers in two states that were prior to October 24 part of the BJP’s footprint across the nation is stunning. The Jananayak Janata Party is unquestionably a family enterprise. Its purpose is to protect the Chautalas from suffering the consequences of corruption. And it is a party that represents key voters — Jats — in Haryana. The proof of the pudding is the speed with which Abhay Chauthala was released on furlough so that he could celebrate his son’s ascension to the deputy chief minister’s post and so effectively become the next generation’s crown prince. Additionally, the BJP needed to get caste interests under control in Haryana after Mr Modi’s message and Mr Shah’s strategy and organisational genius failed to get Mr Khattar the anticipated 75-plus seats.

If the BJP really meant to do what it had declared — one nation, one vote — the best time to get started would have been now. What would have prevented the BJP from nudging the cooperative Election Commission from obsequiously clubbing the elections in Maharashtra, Haryana, Jharkhand and Delhi together? The Jharkhand elections are due in November/December, while Delhi is due in February 2020.

Bundling four states together in one playoff was a risk. The BJP chose to avoid it. Having said, in October, that “the elections are an opportunity to show that the entire country is together on this issue”, meaning the justness of abrogating Article 370 and turning Jammu and Kashmir into two Union territories, the BJP did not opt to test the truth of it.

Voters in Maharashtra and Haryana have delivered a message. Contrary to the apologists of the BJP, it was not the party’s strategy that went wrong. It was that the voters preferred others to the BJP. The reasons for choosing anyone other than the BJP can be many. Economic reasons would be the easiest to understand because there is data that confirms the abysmal performance of the BJP governments and the pain this is causing for millions of Indians in rural and urban areas.

To assume that there was just one principal reason for voters in Haryana and Maharashtra to decide the way they did would be to simplify how rationality works. The verdicts in both states are quite clearly unhappy/disgruntled/disappointed with the BJP. To pass off this sentiment or reason as failure of strategy is taking people to be fools.

The failed strategy excuse, which is backed up with data on the increase in voteshare, is eyewash. It is a cover up for the inevitability that voters in a robust democracy are sometimes unpredictable. Like sheep, they can be wayward. They can lose themselves and Bo Peep it seems does not know where to find them.

The challenge now for the Amit Shah-Narendra Modi duo is to reduce the chances of another unpredictable outcome. In order to do so, the leaders will need to introspect instead of finding fall guys to blame for the “strategy failure”. It will also require for the BJP to accept that voters can change their mind.

It would be easy to conclude that the manipulation of minds by talking nationalism and identity, excluding the minorities, crucifying the secularists and critics as anti-nationals, corrupt and opportunists has reached the point of diminishing returns. It may have; but that will not become clear till some more voters in hitherto BJP-controlled states give the party a hard time.

The facts, as of now, are simple. The BJP’s winning formula has not worked. Its other formula of buying up candidates, legislators and support has not worked either. What it points to is that the voters are preparing to give the BJP a run for its money.