Opinion   Columnists  29 Jan 2020  The only way to get rid of Trump is to vote him out
Opinion, Columnists

Yet, for all his flaws, in one crucial respect Trump is a rational and shrewd operator. 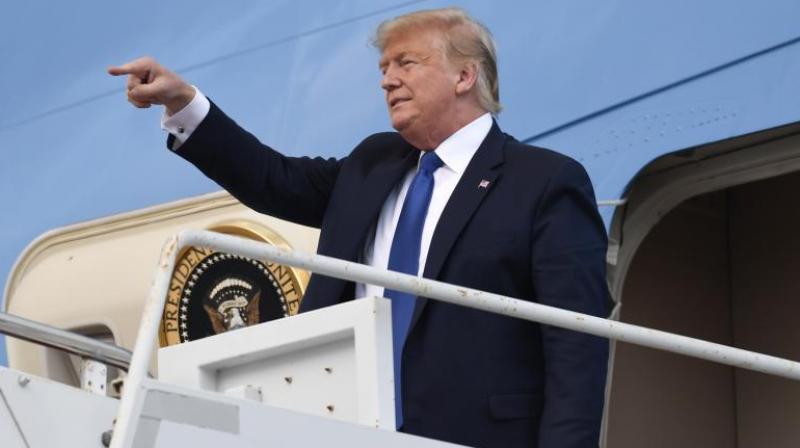 Donald Trump’s rancid reputation will flourish long after he slinks away, ranked somewhere between historical Caligula and fictional Voldemort. He will relish infamy so long as he retains the blind adoration of 40 per cent or so of US voters who cling to his pricey garments. This tinsel messiah’s only creed is personal gain. Knowing nothing else, he treats government like a big-business enterprise, i.e. as a tinpot tyranny, and is running the shambles into the ground, like his earlier bankrupt enterprises.

Yet, for all his flaws, in one crucial respect Trump is a rational and shrewd operator. He scrupulously confers on the American upper class whatever they desire — tax cuts, military toys, anti-labour measures, environmental disregard, welfare cuts, deregulation and every advantage short of reinstating slavery. From force of habit Trump cheerily adds misogyny, racism and bigotry to the mix. If you’re a tycoon, what’s not to like? Less financially fortunate Republicans hail the orange-haired chief despite, or more likely because of his mean bluster. His impulsive foreign policy acts do dismay some supporters, but plenty of Ivy League professionals and pundits applaud his audacity.

Presidents may be impeached for “treason, bribery, or other high crimes and misdemeanours”. An inept or appalling performance does not count. The problem for impeachment-obsessed Democrats was finding a charge against Trump that did not apply to most or all prior Presidents. They flubbed it. This impeachment is little more than a show trial mounted by establishment Democrats to distract attention from their unwillingness to offer working Americans anything they need. Even “progressive reformer” Elizabeth Warren has backed off a promise for universal healthcare (and cost her popular support). Rival Bernie Sanders, still staunchly progressive, is being pelted with baseless accusations of anti-Semitism (a tactic that worked against Jeremy Corbyn) and sexism to divide supporters and thus boost conservative candidates. The impeachment process is predicated on the belief that it would inhibit Trump, but it only goaded him into wag-the-dog manoeuvres. All that it will accomplish is to ensure that every future US administration facing an Opposition majority in Congress will be impeached for whatever reason.

Trump’s alleged offence was to strong-arm the Ukraine regime to dig up dirt on Joe Biden’s son, who in 2014 landed a $50,000-a-month post with Ukrainian natural gas consortium, Burisma. Was it because of daddy’s connections? You be the judge. Like it or not, every presidential candidate plays dirty with opponents; how else did the titillating Steele dossier wind up in the possession of Clinton’s camp? Every President since the FBI was formed in 1908 utilised it and other agencies to surveil opponents.

In 1968, LBJ learned that Richard Nixon interfered with Vietnam negotiations in order to prevent a deal before the election. The irony is that he could not disclose the Republican candidate’s treachery without admitting he spied on him. Nixon then spied on anyone he fancied a foe. Gerald Ford pardoned Nixon, thereby condoning his activities.

After presiding over the colossal security failure of 9/11, George W. Bush signed the Patriot Act that placed virtually all presidential or security agency activity beyond public scrutiny.

It’s not just his aggrieved acolytes who ask what’s so different about Trump. The anticlimactic end of the tedious circus this month hopefully permits a turn of critical attention to policy issues. If impeachment follows strict and scripted partisan lines, as it does, it is self-invalidating so far as outsiders can see. Abuse of power? How do you know you have power unless you abuse it? That’s the whole point of exercising power to most of those who seek it. The only way to get rid of Trump is to vote him out, and this distraction has not helped.