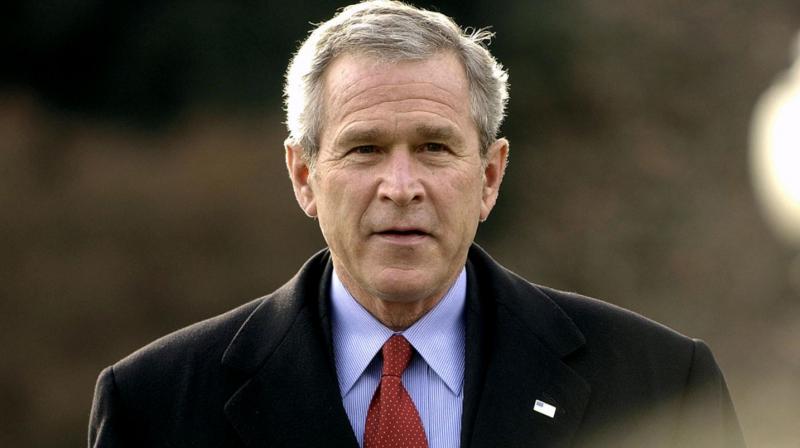 Former US President George W. Bush had gone a step further. He saw Australia not as a deputy sheriff but as a sheriff. (AFP Photo)

Questioned about the anticipated American withdrawal from Asia -- which is what the much-hyped AUKUS (Australia-UK-US) alliance is all about -- Singapore’s Lee Kuan Yew had warned back in 1992: “Nature does not like a vacuum”. Considering the prospect of the Japanese, the Koreans and the Chinese muscling in, he asked (tongue-in-cheek?): “Will India then come down to our seas with two aircraft carriers?”

Commentators in India who are gloating over what they call Prime Minister Narendra Modi’s bid for global leadership would undoubtedly be flattered and delighted if Mr Lee were indeed serious about an Indian role. No one can forget the childish elation at New Delhi’s highest levels when an American administration had promised to help India achieve its superpower ambitions. Last week’s meetings in Washington and New York, following the trilateral defence pact between Australia, the United Kingdom and the United States, gave a sudden spurt to New Delhi’s hopes of a permanent membership of the UN Security Council.

But any realistic assessment of events confirms that a weakened Washington seeking to cut back on defence spending, reduce its foreign commitments and conserve resources after the colossal fiasco of the Afghanistan military pullout cannot see the mantle of Indo-Pacific leadership descend on a poverty-stricken, Covid-ravaged India that is squabbling with most of its neighbours while moving towards a mono-cultural identity. A serene, stable, secular and prosperous white (still!) Australia is a far safer bet from the Western and Nato points of view.
Although with no taste for the boasting and bombast that are characteristic of the “new” India, Australians are not exactly coy about surrogating for America. Nearly 20 years ago John Howard, Australian Prime Minister from 1996 to 2007, described his country as America’s deputy sheriff.

Former US President George W. Bush had gone a step further. He saw Australia not as a deputy sheriff but as a sheriff. “There’s a difference. Equal partners, friends and allies. There’s nothing deputy about this relationship,” he said. It’s doubtful if the most sycophantic Indian leader would relish either role.

Nor was Mr Modi’s “Our four countries came together for the first time in 2004 to extend support to the Indo-Pacific region post the tsunami” quite the whole truth. The Quadrilateral Security Dialogue’s strategic dimension was evident even then in Malabar ’07, the 13th in the Indo-American series of naval exercises that was expanded to include Australia, Japan and Singapore. Things have changed since then. However, it’s AUKUS and not the Quad that merits China’s barb of an “Asian Nato”. Senior BJP spokesmen like Sudhanshu Trivedi and Vijay Chauthaiwale might believe that the Quad has vanquished terrorism; more practical (and honest) observers know that AUKUS’s emergence has exposed the Quad’s toothlessness.

“It’s not a security meeting or a security apparatus,” White House press secretary Jen Psaki admits of the Quad. It would have been able to achieve little without the potentially coercive force of AUKUS which is a response to the perceived Chinese aggression. Even the effects of this imaginary deterrent can be exaggerated. What impact would Australian nuclear-powered subs in the Indo-Pacific Ocean have on aggression in Ladakh? Would these subs attack China’s Navy in the South China Sea to resolve Australia’s trade dispute with the Chinese? Or attempt a reverse Pearl Harbour to persuade Beijing to be more accommodating over tariffs? It is inconceivable that the US should want a military confrontation with a China whose holding of $1,068.3 billion of US
government debt (14 per cent of the total) makes it the second largest holder of US government debt, after Japan.

What the shift may indicate is that American military diplomacy is shifting from the specific defence of Taiwan to more general threats, real or imagined, across the entire Indo-Pacific region. This is seen as a step towards a new balance of power and a commitment by the United States and Britain to transfer some of their most sensitive technology to a third country over the next decade. The only parallel is the US handing over a nuclear submarine propulsion plant to the Royal Navy in 1958 to enable Britain to go nuclear at sea. Not only are nuclear-powered subs sensitive because of their range, speed and stealthiness, they are also dangerous because they are powered with the same stuff — usually, uranium enriched so that it has a higher proportion of the most fissile isotope, U-235 — that makes bombs so lethal. Yet, the US (or Britain, with its blessings) will build a fleet of at least eight nuclear-powered submarines for the new Sheriff of Asia under procedures to be worked out over the next 18 months.

To be fair, this first-ever face-to-face meeting of the rulers of the US, India, Japan and Australia went beyond nuclear weapons. Cooperation also promises to embrace cyber capabilities, artificial intelligence, quantum computing and more. Mr Biden’s new “Quad fellowship” will take students from the three other Quad countries to the US to pursue advanced degrees in STEM programmes. “It represents an investment in the leaders, innovators, and pioneers of tomorrow,” according to the US President.

Not that all imponderables receive similar serious attention. France’s diesel-powered submarines may be technologically inadequate but their summary rejection by Australia’s sudden cancellation of a $40 billion deal has left Paris understandably enraged. The small nations of the South Sea Islands are worried about nuclear proliferation. Indonesia is “deeply concerned over the continuing arms race and power projection in the region.” Iran sees no reason now to curb its own nuclear programme. Neither does North Korea. In fact, the NPT is a dead letter.

What cannot be forgotten is that the relationship with China is not only military. China accounts for 20 per cent of pollution and must be an active participant in the forthcoming climate change conference to be held in Glasgow. China is a major buyer of all Australian produce. China is a major exporter to India. Many smaller economies might collapse if the Chinese call in all their debts.

America has thrown down the gauntlet. The world is now waiting to see whether China picks it up.