The Indian Railways are the country’s largest public investment, employing over a million people. 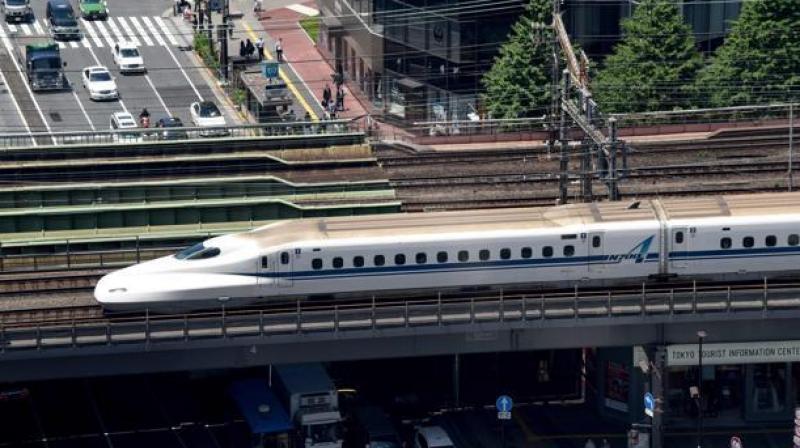 Work began on the bullet train (or superfast train) project in the very month that the Indian Railways suffered a major setback in having nine accidents and derailments. The question that it raised was whether the above Rs 1 trillion (lakh crore) to be spent on the 534-km Mumbai-Ahmedabad bullet train be better spent by the Railways on improving overall safety, ensuring timely delivery of heavy materials like steel, coal or cement for industry, and raising the level of passenger comfort.

The superfast train looks very attractive on many counts — reducing the time of travel by more than half, gradually building the skills in industry to service the needs of building tracks and safety systems for the Railways and helping to develop small towns like Palghar or Vapi near the track, which can be halts.

Added to this is the high safety and punctuality level in Japan’s Shinkansen, or bullet train system. These bullet trains have been operational since 1964, have carried over 10 billion passengers till now, without a single accident or casualty and an average delay of less than one minute. These standards are phenomenal, but it is highly unlikely that the prevailing culture in India will allow that to be replicated here.

Though Japan was the first country in the world to build bullet trains, many other nations have followed, notably France, China and Germany. China has moved ahead the fastest, now having 22,000 km of track for bullet trains. It has exported train systems to Thailand and Indonesia and is an avid seeker of markets. Though the trains are cheaper, India prefers Japan for geopolitical reasons, and to not allow Chinese influence to grow in our infrastructure policy.  Japan has so far only managed to sell its bullet trains to Taiwan, but has not transferred the technology.

The Rs 1.1 trillion cost may not seem very much for such a large project, but when compared to alternatives or the high cost of travel, that will invariably be subsidised, the picture begins to change.

The original Shinkansen, connecting Japan’s largest cities Tokyo and Osaka is the world’s busiest high-speed rail line. Carrying close to half a million passengers daily per year on 350 trains, at peak times the line carries up to 13 trains per hour in each direction with 16 cars each (1,323-seat capacity) with a minimum headway of three minutes between trains. It is a profitable route, unlike most other lines which run at a loss, but the fare is around $130 (around `8,400) for a one-way Shinkansen ticket from Tokyo to Osaka.

Profitability is a notoriously hard task for high-speed train networks. Most lines that criss-cross Europe, for example, are in the red.

The proposed Mumbai-Ahmedabad route would have 35 trains a day — one-tenth that of the Tokyo-Osaka route, that costs $130 (around `8,400) per one-way ticket or roughly double the airfare. With less frequent trains, the costs in India would be far higher. And since it is extremely unlikely that the Railways would be able to fill some 46,000 seats a day (35 multiplied by 1,323) at these rates, the subsidy would have to be stupendous. Needless to say, this would mostly go to people who politically support Prime Minister Narendra Modi. A subsidy of about half the fare will mean a loss of Rs 1.91 crores to the Railways every day, or around `700 crores a year.

To get an idea of the magnitude of the costs involved, former railway minister Suresh Prabhu’s first Rail Budget in 2014 projected a five-year expenditure of a similar amount for network expansion and strengthening safety over five years in the entire country. It will be reasonable to assume that in the light of recent rail accidents, this money was not well spent. The Railways would be further impoverished for their needs to support the white elephant of a bullet train, that will be a fancy showpiece but achieve little else else.

The Indian Railways are the country’s largest public investment, employing over a million people. Over the decades they have been neglected and have lost marketshare to other means of transport. A rejuvenation of the Indian Railways is badly needed, but not through elitist solutions like bullet trains. Investment in new rails, signalling equipment, rolling stock of wagons and passenger facilities  and proper management could push up the utilisation of rail capital, ultimately leading to better services and faster trains.

But the Narendra Modi government prefers flamboyant high-profile projects to those that offer the maximum effect on ground. In its eagerness to push the bullet train, it hides the cost by talking of a “virtually” interest-free loan from the Japanese government of Rs 88,000 crores. But this ignores the fact that the loan is in yen, which has a history of appreciating with other currencies, specially the rupee.

Many other issues arise. Land acquisition is one. The bullet train will run on dedicated tracks, separate from regular ones, that will have to be fenced to prevent humans and animals straying on the rails. This will double the land required and increase costs.

India is a large country with one of the largest and oldest railway systems in the world. It has skills that have not been allowed to develop. China built its own huge bullet train system in the 1980s with some initial help from the Japanese, but largely on its own. The Indian Railways need a major push to modernise, to have safer and more secure trains, a faster turnaround of freight traffic, and quicker passenger trains to increase the total share of passenger traffic, and better stations that provide clean food and water. We have the ability to do this on our own, and not be led up the garden path with fancy promises.