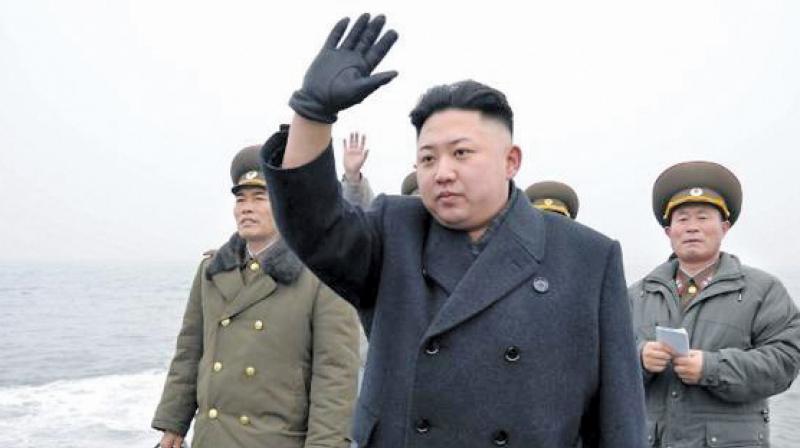 North Korea celebrated the 85th anniversary of the foundation of its Korean People’s Army earlier this week, on Tuesday. Usually, it has marked important events in the past by launching missiles or conducting nuclear tests. As the American aircraft-carrier strike group led by USS Carl Vinson sped to the region and US officials warned that “all options are on the table”, there were fears that the North Korea might use this day for its sixth nuclear test.

In the event, there has been much sabre-rattling on both sides, but no nuclear test. North Korea conducted live-fire drills involving 300-400 artillery pieces. The US nuclear-powered submarine USS Michigan reached the South Korean port of Busan on Tuesday for exercises with the Japanese and South Korean navies. As three Americans were taken as hostages in North Korea, US defence sources are talking about North Korea developing a nuclear-tipped missile that could reach the American mainland, and contemplating the need for a pre-emptive strike.

US expert Jonathan Pollack has warned that loose talk of pre-emptive strikes could lead to North Korean retaliation, so that the US “could stumble needlessly into what would be the biggest crisis in East Asia since the United States intervened in the Korean War in 1950”.

The last two weeks have seen increasingly shrill rhetoric from North Korea, provocative tests of missiles, and US and South Korean military manoeuvres.  The latter have evoked harsher North Korean warnings: its state media have threatened to deliver “the most ruthless blow” if there is “even the smallest provocation” from the United States, and that the United States and South Korea could be “completely destroyed in an instant” if North Korea were to launch a pre-emptive strike.

It is against this fraught background that Chinese President Xi Jinping visited Washington on April 6-7. China is North Korea’s principal ally, accounts for 90 per cent of its trade and is the main source of the country’s food and energy. But despite US President Donald Trump’s anti-China remarks during the 2016 US election campaign, the most interesting outcome of this interaction was China’s support for the United States on the North Korean issue.

On April 17, the US state department said that China had sent the Trump administration “positive signals” that it would increase economic sanctions to pressure North Korea to abandon its development of nuclear weapons and missiles. Later, a day after North Korea’s vice-foreign minister said  and use nuclear weapons if threatened, a Chinese foreign ministry spokesman said Beijing was about North Korea’s recent nuclear and missile activities.

At the same press conference, spokesman Lu Kang praised recent US statements on the North Korean issue: “American officials did make some positive and constructive remarks... such as using whatever peaceful means possible to resolve the (Korean) Peninsula nuclear issue.”

China is also showing some new toughness towards North Korea: it banned imports of North Korean coal in February and has reduced fuel sales to North Korea.This has evoked some harsh words from Pyongyang, including the warning that China “should get itself ready to face the catastrophic consequences to its relations with the DPRK”.

Global Times, a Chinese state-run paper, said in a recent editorial that China could enforce “stricter measures” aganst North Korea, including a ban on oil exports, or join a US-led effort to block the North’s access to international financial markets. However, Chinese foreign minister Wang Yi refused to confirm these initiatives.

While China is pursuing a balanced approach at present between the US and North Korea, China’s interests differ from those of the US in crucial areas. China on its part is wary of efforts to pressure the North Korean regime militarily, being concerned about an unpredictable North Korean retaliation should the regime in Pyongyang fear collapse, the attendant regionwide political turmoil and the influx of refugees into China itself.

China also views negatively the possible reunification of the Koreas under a South Korean government closely allied to the United States, since that would expand US influence at its borders. More immediately,China sees with great disfavour the US military’s increasing presence in South Korea, specifically the US move to deploy elements of its Terminal High-Altitude Area Defence (THAAD) missile defence system.

Chinese foreign minister Wang Yi has said THAAD is “not a simple technical issue, but an out-and-out strategic one”. Countering a powerful missile defence system means more advanced Chinese missiles, with more aggressive deployment. Security affairs commentator Ian Armstrong has noted that China is not so much concerned about the interception capabilities of THAAD, but another major THAAD component — the radar, which identifies and communicates the location of missile targets to the interceptor.

Though the US and South Korea have repeatedly said THAAD will be directed only at North Korean missiles, the Chinese know that THAAD’s radar can be easily switched into a long-range mode that would give the US an early warning of Chinese missile launches. Chinese commentators see this as evidence of US reluctance to work with China on promoting regional stability and see no alternative to pursuing their own missile programmes to counter the American strategic advantage in the region.

The latter could include hypersonic glide vehicles and multiple, independently targetable re-entry vehicles. MIRVs are difficult to detect and would thus effectively counter the strategic advantages provided by THAAD.

On Wednesday, South Korea triumphantly announced that unspecified parts of THAAD had been installed. These are said to include two or three launchers, intercept missiles and a radar. China sees this as an ill-timed provocation.