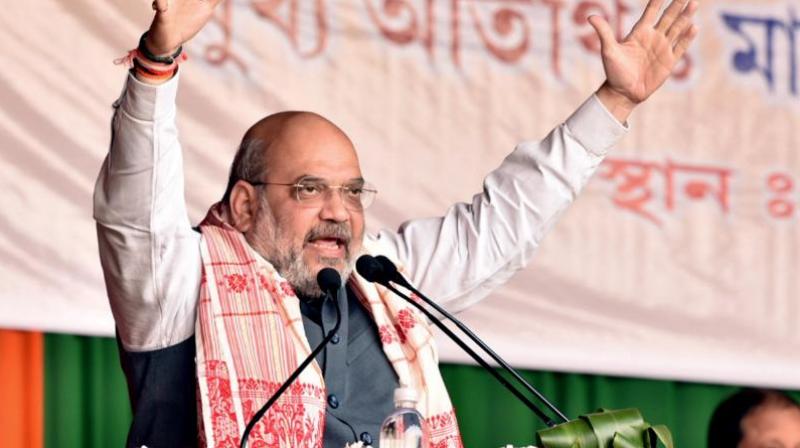 Amit Shah at a poll rally before the 2021 Assembly elections in West Bengal. (Photo: PTI)

The asymmetry of power, resources and responsibilities between the Centre and the states in India’s federal structure has been so overwhelmingly tilted that it was but natural for the BJP led by Prime Minister Narendra Modi to assume that it was unchangeable and universally so, allowing him to try to scare and repress a puny (sic!) regional player, namely Mamata Banerjee and her Trinamul Congress party, after her splendid third-time victory. He and his party should have known better.

There is the power of the State, expressed through hundreds of articles in the Constitution of India, and then there is the power of the ultimate sovereign, the ordinary woman and man, who votes and delivers a verdict. In a statement that was unusually long and politically sagacious, CPI(M) West Bengal state secretary Surya Kanta Mishra delivered a summary of the attempt to induce turmoil and destabilise the Mamata Banerjee government as “revenge politics,” adding, for good measure, that the “BJP should remember that the people of Bengal rejected their ideology in the Assembly elections”.

That the CBI’s sudden swoop and arrest on May 17 of three Trinamul Congress leaders, two of whom are ministers with responsibilities vital to bringing the Covid-19 surge and the six-week election administrative disarray under control, is vendetta politics is not any doubt in the minds of West Bengal’s voters. The CBI’s raid that netted three TMC leaders and one politician with no party affiliation in a case of bribery and corruption, aka the 2014 Narada sting operation, brought into sharper focus the “washing machine” politics of the BJP.

Left out of the list of those arrested were Mukul Roy and Union home minister Amit Shah’s prize recruit Suvendu Adhikari, prompting the public through the social media to question the exception.

The outcome is a further boost to the Trinamul Congresss’ standing with the people and a further erosion of the BJP’s already tarnished credibility. The courtroom drama has further incensed the man/woman on the street, regardless of what the Centre’s lawyers may have argued, backed by the entirely irrelevant social media commentary by governor J.P. Dhankar.

There is no difference of opinion on what these antics are all about -- first the tweets by the governor about the near breakdown of the state’s constitutional machinery that were meant to signal that President’s Rule could be imposed at any moment, overthrowing the just elected government, followed by the raids have been identified by the Congress, CPI(M) and privately by some sane BJP leaders as well.

In repeating behaviour similar to cattle raiders to hit back at the Opposition parties, the Narendra Modi government used exactly the same tactics of using or perhaps misusing the power to awe and smear vested in the Centre that had failed; governments led by Arvind Kejriwal in Delhi, Pinarayi Vijayan in Kerala, Hemant Soren in Jharkhand, Uddhav Thackeray in Maharashtra and Ashok Gehlot in Rajasthan were all raided and pushed back and Narendra Modi and his party were the losers.

In the preceding decades the capacity to push back, a complex mix of regional political culture and history that shaped the popular perception, was weaker than it is now. In West Bengal, the capacity to fault the Centre and winkle out vendetta politics against the legitimately elected and popular government has been honed over decades, when the Congress used Article 356 to impose President’s Rule against the rickety coalitions of the United Front in the 1960s.

Over years of experience of the politics of discrimination and the consequences of the asymmetry of power between the Centre and the state, the average man in the street and especially in the rural areas, is politically well educated.

If these were diversionary tactics as has been argued in some quarters, it was politically foolish. The frantic family members of all those who died because the Modi government had not taken steps to ensure adequate supplies of oxygen to meet the surge that every expert said was coming are not diverted or deceived. The scandalous incompetence of the ruling establishment to handle the crisis is evident in the number of deaths across the country -- three lakhs and counting.

If these were tactics to assert the power of the Centre over the state, it was so badly timed that it has been described by BJP insiders as politically suicidal. Neither West Bengal’s electorate nor voters across the country are impressed by the display of power when the lives of loved ones have been sacrificed to feed the Modi government’s hubris. There is so much traffic on the social media on this that there can be no room to challenge how the people have interpreted these shenanigans.

What is worse is that the judiciary has now been embroiled in what for the BJP is nothing more than a game that has gone wrong. A split decision on granting bail to the arrested leaders says it all. The simple conclusion, regardless of the complex interpretations by the Centre’s lawyers, is that the decision to arrest by the CBI is doubtful in law. No matter how long these hearings last, it is not possible to repair the political damage that the BJP has inflicted on itself in the people’s court.

The BJP’s wizards have created a bigger problem for themselves out of the West Bengal defeat. The queue of defectors pleading to rejoin the Trinamul Congress is the best indicator. As is the letter from a defeated BJP candidate, Locket Chatterjee, who is still an MP, to Amit Shah asking for the Central security detail to be removed, because she cannot be a protected entity while the party’s workers are unsafe.

Violence to settle political scores, before, during and after an election, is always condemnable; but that unfortunately is West Bengal’s culture. Having flaunted its arsenal of Central security forces to enforce peace before and during the elections, by constructing a narrative of locally uncontrollable violence, the BJP overplayed its hand. The post-election sending out of Central probe teams, frantic tweets by the governor or meddling by the Prime Minister are pointless gestures and understood by the public to be so. The verdict is out, and the BJP cannot overturn it, that West Bengal is not impressed by its leaders and categorically rejects its communal and divisive politics.