India is yet to declare devastation caused by Amphan a national disaster; its dithering is a signal of the political leadership’s inadequacy 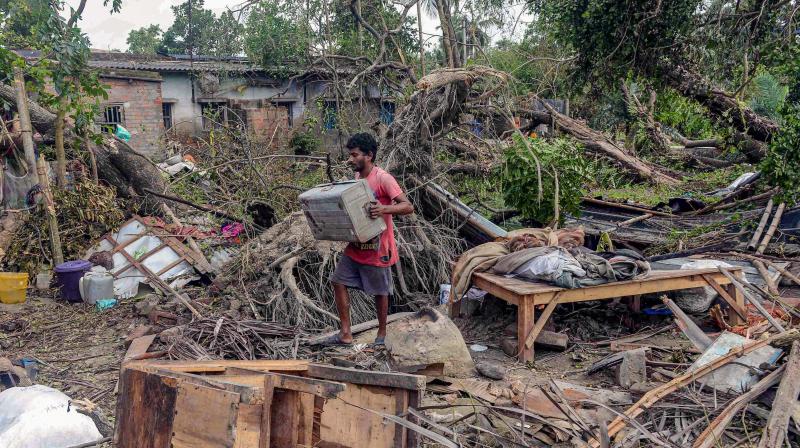 In the wake of the Amphan super-cyclone, the short-term restoration of a minimum-level normality, the medium-term rehabilitation of those evacuated and the longer exercise of reconstruction and sustainable solvency will test the capabilities of the political class. The competence to govern, of Prime Minister Narendra Modi and West Bengal chief minister Mamata Banerjee (who is in charge of ground zero), will be on trial.

India is yet to declare the devastation caused by Amphan a national disaster; its dithering is a signal of the political leadership’s inadequacy in comprehending the colossal difficulties of coping with the consequences, in pandemic times. Delivering bare subsistence relief will be difficult enough, with supply chains disrupted and production halted. Delivering survival support, over months, till the economy acquires some buoyancy, so that the estimated six crore affected population can revert to their usual self-reliance mode to rebuild their lives, will be a challenge for the Narendra Modi government.

Never more so than now, the Centre has to step up to the job that it has failed to do, till now, in managing the consequences of the long and harsh lockdown. If it ducks this challenge, it will have betrayed the responsibility of the Indian State to its citizens. West Bengal alone can only do so much. The Modi government’s initial advance of Rs 1,000 crores is only a token, given the ballpark estimate by  Banerjee that relief, rehabilitation and reconstruction in the immediate future will cost Rs 1 lakh crores.

The state is short of money. It has been short of money for years, as the Centre quibbled on paying its dues to West Bengal. It held up money sanctioned for reconstruction after the major cyclones like Aila 10 years ago, Fani and Bulbul in 2019. Instead of engaging in petty, competitive politics of the BJP versus Trinamul Congress, it’s time for Modi and  Banerjee to morph into either statesmen or buffoons.

To step up to the enormously complex task of managing the Amphan aftermath, in ways that are not set out in the pre-pandemic manuals on disaster management, packed with standard operating procedures that evolved from the experiences and priorities of the pre-colonial and colonial era and the post-Independence republic, the political leadership has to do two things. First, face up to the reality of pandemic times; two, rewrite the standard response manual.

This is the moment when the demand by the Congress, other Opposition parties, trade unions and farmers’ organisations for a minimum Rs 7,500 per month cash payout per head from the Centre as compensation for the jobs lost due to the lockdown begins to look like a lifeline for West Bengal’s Amphan afflicted. The entire list of demands released on May 22 is a part of the strategy  Banerjee needs to raise as a demand from the Centre for Amphan relief. The wider implications of the demand will transform the post-Amphan restoration challenge into a comprehensive national response to the manmade part of the two natural disasters of the coronavirus and the super-cyclone.

As the chief minister and political leader at ground zero, Banerjee has figured out only one part of the nature of the challenge. She knows, but hasn’t spelt out, that the monsoon is due to arrive within the next two to three weeks. The homing instinct of the rural poor is unstoppable. Precarious as it may be, they will return to rebuild as soon as possible with whatever material they can scavenge.  Rebuilding the 15 breached or broken embankments is, therefore, a top priority. She knows, and Modi does not, that unless adequate (which means vast sums of money) resources, people and plans are put together with speed, the lakhs of homeless will take dangerous risks compounding the management of the post-Amphan crisis in pandemic times.

India is losing time by the hour to manage the Amphan aftermath. The longer it puts off framing a prioritised coordination short-term action plan, with a nebulous idea of the long-term measures required to ensure its success, managing the natural disaster could turn into a huge manmade disaster.

The unprecedented health crisis, compounded by the short-term response of the harsh and unplanned lockdown, the economic contraction and the deliberate and stubborn refusal to save jobs, protect wages and incomes, sustain and boost demand, means there is nothing except government schemes to depend on for rebuilding shacks or semi-permanent housing, buying the pots, pans and basic food to survive. Migration is not the easiest available exit route to survival any longer, After Cyclone Aila in 2009, there was an exodus of able-bodied men and women from the Sunderbans; in the villages, only schoolchildren, women, the old and sick remained. People who left haven’t come back to the Sunderbans to resettle. The incredible capacity to cope, the sheer resilience of people whenever natural disasters have struck in the past, is a testimony to their rugged self-reliance and their compulsion to be so, with often callous, usually chaotic and rarely sustained administrative interventions.

The piling up of what economists call “shocks” will push the endurance of the people to its limits. The impossibility of normality in pandemic times means that neither Kolkata nor the districts have a fallback tried and tested strategy for reconstruction, at the individual or governmental levels. It took Banerjee two days to realise that there is a manpower shortage, of people with specific skills, to help restore Kolkata’s power lines, clear fallen trees and clean up the muck accumulated by waterlogging. Calling on the Army and seeking help from the Railways, Kolkata Port Trust and private sector companies was a late response.

But these are extraordinary times. She may need more such support as more deficits and gaps emerge. The ossified response of ceaseless attack as a competitive political strategy to discredit the rival and entice voters by selling hope and prosperity in the future reveals the BJP’s rigidity. The chatter on the social media confirms that the middle class, new and potential converts to its priority cause of defeating Banerjee in the 2021 Assembly elections, have already turned away from the BJP.

The rootedness of Mamata Banerjee, regardless of her shortcomings, is what really matters. Her popularity may dip and soar with mood swings among those affected; but she is a true-blue Bengali. That matters.