Shikha Mukerjee | Mishandling elections in the time of a pandemic

Through super-spreader events and shoddy observance of Covid protocols, Citizens are paying twice over for the EC’s failures 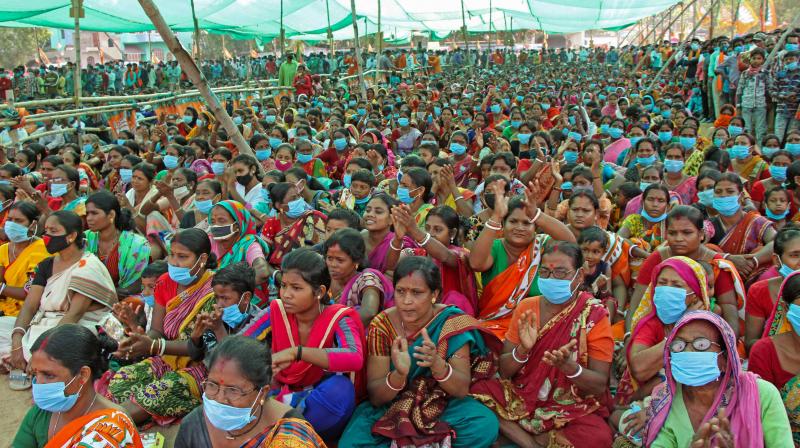 For voters and contestants, every election is necessarily different, because the ways in which the thousands of acts of omission, commission, violation and bad faith by the incumbent government or the challenger are in a constant state of change. For the Election Commission, tasked with conducting the process through which the voter chooses a representative who is adequate to fulfil the aspirations and expectations he or she has, every election is both different and the same.

The context in which an election is held is certainly material to the way the Election Commission undertakes the exercise of holding free and fair polls so that the people’s sovereign will is exercised without obstruction or violation. If the EC fails to comprehend the context, then what follows is a super-spreader event of terrifying proportions in the state that has been victim of the whims of the poll panel in its refusal to recognise that the Covid-19 crisis could turn into a catastrophe.

Dismissive of the pleas of West Bengal’s ruling party and the state government, of all other Opposition parties barring the BJP that the eight-phase six-week poll schedule would be seriously risky at a time when new mutant strains of the coronavirus were detected and whose impact had pushed Britain and Europe to declare new lockdowns, new protocols and manage a new crisis, the EC maintained it had no power to alter the schedule after it was announced or notified. It insisted it was entirely capable of ensuring its strict guidelines on how campaigning and voting should be done in Covid times were followed by all candidates and of course their parties.

Having announced its guidelines, mobilised the largest force of security personnel drawn from every Central paramilitary force imaginable, adding up to over 1.5 lakh jawans and officers and innumerable support personnel, brought in over 200 general observers, added to the original 54 appointed as police observers, the EC flooded West Bengal with the paraphernalia necessary to do two things simultaneously — hold peaceful, free and fair polls over eight phases and ensure adherence to its Covid guidelines. It failed on both counts at an incredibly high cost to the public exchequer.

Citizens exposed to the virus through super-spreader events and shoddy observance of Covid protocols are paying twice over for the EC’s failures and its outrageously unrealistic assessment of its own capacity to deliver a flawless election process. The death of two candidates from the virus, a large number of candidates ill or critically ill because of the infection and the final humiliating confirmation of its inadequacy as the order from the Calcutta high court lashed out that the role of the EC cannot be just “issuing circulars” and “holding meetings”.

The Calcutta high court last week said the judiciary would step in and “act like T.N. Seshan”, the legendary tough chief election commissioner, who had postponed and threatened to cancel elections in Bihar and West Bengal if political parties failed to follow the rules.

Through the weeks of disastrous mismanagement by the EC that has cost lives and skyrocketing state public health expenditure to cope with the outfall of the speed of the spread of the deadly virus, the then chief election commissioner Sunil Arora and current CEC Sushil Chandra said they were powerless to listen to reason and heed the context of this election in West Bengal, namely the danger of an even greater surge of the evolving virus.

The Election Commission dismissed the plea by Mamata Banerjee that the eight-phase election was very risky. It seemed to pay more attention to the BJP’s jeers that the eight-phase election was necessary to ensure peaceful, free and fair elections. The Election Commission rejected the April 16 appeal by all political parties in the fray in West Bengal, besides the BJP, that the remaining three phases should be clubbed together. Defending the eight-phase polls, BJP candidate Swapan Dasgupta said anything else would affect the “democratic spirit” of the process. His assurance and that of his party that all Covid protocols would be maintained cut no ice with the Calcutta high court, as its indictment reveals.

In declaring that it couldn’t change the schedule once it as notified, the Election Commission forgot that it has the power to do so and there is a precedent. In 1984, the Lok Sabha elections were held in all states, except Punjab and Assam. Elections there were held in 1985 because the circumstances called for it. In 1991, the EC decided that the Lok Sabha elections would be rescheduled with new dates because after some states had voted, Rajiv Gandhi was assassinated and there was turmoil. The Representation of the People Act is rigid, but the law isn’t stupid. It does admit there can be an obstruction to the polling process after a natural calamity or any other sufficient cause.

As a result, West Bengal saw an unprecedented number of public rallies and meetings organised on a mega-scale for Prime Minister Narendra Modi and Union home minister Amit Shah, at least a dozen or more star campaigners from the BJP’s very large and varied pool of leaders, including defence minister Rajnath Singh and UP chief minister Yogi Adityanath. A comparison of one day of campaigning by the BJP and Ms Banerjee is revealing; the BJP held at least nine major rallies, roadshows and meetings on one day while Mamata Banerjee managed only four.

As the challenger in West Bengal, the BJP’s capacity to spread havoc without being restrained by the EC, outdid all other political parties on a daily basis. Can it be a mere coincidence that Prime Minister Modi cancelled his final four rallies, out of a total of 18, minutes before the commission announced the ban on rallies?

A pandemic on the scale of Covid-19 is unprecedented. If the EC failed to grasp this simple fact, so did the Prime Minister. Not till the nationwide oxygen shortage began killing patients in hospitals across India, ICU beds ran short and private hospitals went to court did the magnitude of the calamity impress itself on Mr Modi, whose office had earlier reportedly turned away Maharashtra CM Uddhav Thackeray’s desperate SOS for help. Can the democratic spirit freely exercise its franchise if disease and death stalk the voter? The EC will eventually have to answer this question.