Steering between the simplistic and the messy complexities of identity politics in West Bengal, the BJP is travelling over a minefield 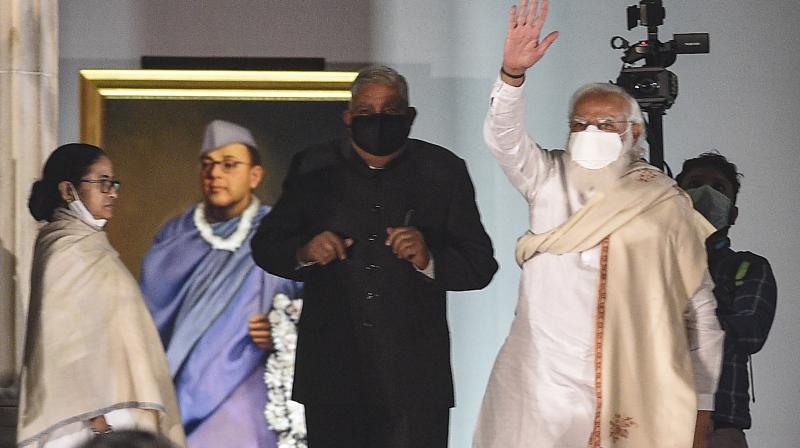 If the BJP had studied the traditions of the celebration of Netaji Jayanti in West Bengal over the decades, it would have discovered the facts and stopped itself from inventing a fiction. (Photo:PTI)

Before it can defeat Mamata Banerjee, the BJP has to find a way of disarming the Bengali. As a target, Mamata Banerjee could be vulnerable if the grievances of the discontented were the only issue. But the Trinamul Congress and its leader are embedded in the tricky topography of West Bengal, which is peppered with hidden pitfalls.

Armed with its brand and its scorecard in elections across India, the BJP is anticipating a tough fight to attain its goal of fusing the state with the main body of a saffronised Bharat, of reaching the point where it can claim that the nation is governed by one party. Yet, the seemingly closer it gets to pulling off an election victory in West Bengal, the more elusive its target appears.

The Bengali spirit has insinuated itself between the BJP’s hopes and Mamata Banerjee’s fightback. It was this that was out in the open when Ms Banerjee launched the year-long celebrations of Netaji Subhash Chandra Bose’s 125th birth anniversary on Janaury 23, with a rally and a spontaneous burst of song, a surging crowd of people and finally a ringing assertion that Bengal was the crucible that crafted a new vision of a modern India, gave birth to the national movement and defined patriotism by the struggles and sacrifices of its mesmerising leaders. In contrast, the curated, organised and hygienically wrapped celebrations for an audience of essentially one, Prime Minister Narendra Modi, and television viewers was a sanitised, lifeless, joyless programme, minus the exuberance and pride that is quintessentially Bengali.

Voters and their contradictory allegiances and primordial attachments are whimsical and wayward; none more so than the Bengalis. Impressions matter; though not necessarily the first ones.

When Ms Banerjee declined to speak at Victoria Memorial at the spectacle organised by the Union government because she felt insulted by her hosts, she upstaged the Prime Minister, the hecklers and the BJP, by shrewdly turning it into a desecration of the spirit by bully boys primed to create trouble. Television and Twitter went into a frenzy of reactions. The BJP’s army of defenders went on the offensive, asserting that Mamata Banerjee had insulted Shri Ram and Netaji. The Trinamul Congress went into overdrive, accusing the BJP and its leadership of intimidation, harassment and disrespect.

Having already paid her homage to Netaji by hitting the streets in a 6 km walk and a rally where she demanded a list of changes in his name, Ms Banerjee was ready to checkmate the BJP and Narendra Modi. In doing so she heavily underlined the difference between celebrating Netaji and his vision and rigid ceremonials. Her celebrations were a bigger, noisier version of the usual para (local) events; Mr Modi’s was entirely alien to the Bengali tradition. While the jury is inclined to believe that the homage to Netaji was debased by petty politics, the verdict will be delivered sometime in May, when the ballots are counted for the state Assembly elections.

If the BJP had studied the traditions of the celebration of Netaji Jayanti in West Bengal over the decades, it would have discovered the facts and stopped itself from inventing a fiction. In the scramble to and cover up the mistimed and misdirected attack on Mamata Banerjee, the BJP’s IT cell boss Amit Malviya was so rattled that he declared she had walked out of the event in a huff. To cover that up, the BJP’s army of defenders declared that Netaji’s birthday had never been celebrated in style in West Bengal. Nothing could be further from the truth.

The fact that the All India Forward Bloc’s headquarters are in Kolkata is incontrovertible evidence that Netaji’s birth anniversary was dutifully and faithfully observed every year. As the party set up by the leader in 1939, when he asked members to swear a blood oath to devote themselves to the cause of a militant freedom struggle, the Froward Bloc’s small presence in West Bengal politics is nevertheless a meaningful one.

For decades, rickety scaffolding has been annually erected at the Netaji statue in Esplanade and at the Shyambazar five-point crossing, where generations of Forward Bloc leaders have ascended the steps to garland the icon, as have leaders from the Congress and the CPI(M) and the CPI, as homage to a Bengali and a national hero, cruelly snatched by a mysterious death from becoming Independent India’s tallest leader, be it as Prime Minister or as President.

The memory of Netaji lives on in humble homes as a framed portrait. It lives in the conspiracy theories written and reworked by generations of authors and amateur and professional researchers. In every Kolkata para (locality) Netaji Jayanti is a local affair; children practise marching to the drums weeks in advance and then the procession through the streets mimicking the Azad Hind Fauj progressing to free the nation from imperial bondage.

In consonance with this spirit, Ms Banerjee’s celebration was inclusive and participatory. Netaji’s grand-nephew Sugata Bose, the eminent historian, led the concluding event. It was the right occasion for Mamata Banerjee to invoke the injured aspirations of the Bengali people. She demanded that Kolkata should be returned to its former status as a national capital; the Planning Commission should be revived, because it was conceived by Netaji; a monument to the Azad Hind Fauj should be erected in New Delhi. These were sentiments that are the dull nagging ache in every Bengali heart, where the idea that Bengal was the birthplace of India’s nationalism, its radical social reforms and its ideology of secularism, unity, communal harmony and diversity.

The distance between Bengali pride and the BJP’s blunders can be measured in the last-moment inclusion of the visit to Netaji Bhavan in the Prime Minister’s itinerary. To close the gaps in its knowledge of and familiarity with the Bengali mind, spirit, traditions and contradictions the BJP has a mere three months before the elections.

For the BJP to become local, it is neither necessary nor sufficient to poach “local” leaders from the Trinamul Congress and destabilise the party. It has to organically integrate. As is evident, this is an endeavour that would be difficult because of the contest between Bengali narratives of nationalism and its development over time and the BJP’s hybrid version, enshrined in books -- Hindutva, Hindu Rashtra Darshan -- and now being translated into practice. Steering between the simplistic and the messy complexities of identity politics in West Bengal, the BJP is travelling over a minefield.