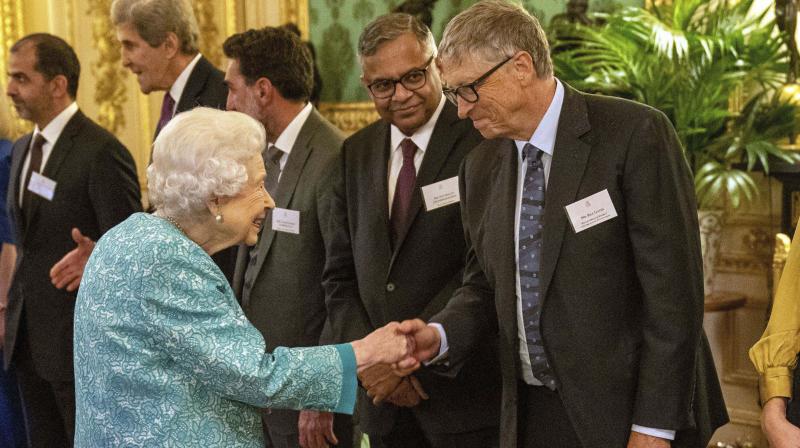 We are just a week away from the big Climate Jamboree in Glasgow but the bigwigs are already flying in. (Politely no one mentions their carbon footprint as they bring investment.) This conference may be a successor to the Paris but it has more business people — bankers and industrialists and Internet giants than normal. Of course, politicians are awaited eagerly. There was an audible sigh of relief when the government heard that Narendra Modi will come but President Xi is still in doubt. Bill Gates is already here and Boris Johnson could not contain himself at a meeting specially to show off Bill Gates’ support.

The Queen had a reception for the rich patrons who are going to pour money for fighting climate change. She threw open Windsor Castle for them. The Royal Family has decided to declare their enthusiastic support for the Green cause. William and Kate, the Duke and Duchess of Cambridge, had a gathering for a million pound prize for people who had innovated devices and ideas to relieve the climate problem. It is called Earthshot in comparison with the Moonshot project launched by President Kennedy 50 years ago. But unlike the business tycoons flying into London, the winners in Earthshot stayed at home and got the news at a distance.

The Queen is not often off her guard but recently when she was attending the Scottish Parliament she was recorded, thanks to a stray microphone no one noticed saying that People (i.e., the political leaders) only talk about these things but don’t do anything. Prince Charles has also been a lifelong crusader for a greener world. Glasgow will show whether the conference gets anything done or just generates hot air.

Yet the biggest news of the fortnight was that the Queen had to cancel her visit to Northern Ireland, which was celebrating the centenary of its creation. This was a result of the Partition of Ireland and it was not a peaceful event then as few Partitions are. But the cancellation of her visit became the big news. Then it turned out that she was advised to rest and not overexert herself. She is 95 herself, and next summer will celebrate 70 years of her rule, a record for any British monarch.

Then she was taken to the hospital for a check-up and that became the big story. She brushed it off as routine. Indeed some organisation decided to honour her as Oldie of the year. She politely rejected the honour saying she was not really qualified to be described as an Oldie. After all her mother made it beyond 100. Of course, the Queen Mother sustained herself daily on a combination of gin and tonic and Dubonnet. The Queen it seems has given up her bedtime tipple. Get well soon and best your mother’s record is all we can say.

Some things never change. The Cheltenham racing season resumed after 18 months. The last time this event had happened was in March 2020. In our innocence, we had not realised that it would unleash the wide spread of infection and lead us rapidly to the first lockdown. Let us hope history does not repeat itself. Fears are being expressed that cases are rising again. We have been having normal events lately. Theatres are open as are pubs. Football stadiums are full and so are cricket matches. Will we have a White Christmas with Santa and brandy and chocolates with friends and family or are we going to be isolated in a bubble, forbidden from going out and ordering our meals online?

No one knows. Boris Johnson hopes not. He is braving it out and refusing to implement Plan B. No one knows whether there is a Plan B in the government’s armoury. But Boris is lucky as we have realised. Somehow he jokes his way through crises. Fortnight ago we were worried about shortage of lorry drivers and having to manage with a shortage of butchers (they gave all gone back to their homes across the channel thanks to Brexit), empty shelves in supermarkets. Now we are worried about lockdown. Boris must thank his stars that no one is complaining about the high price of petrol.