Shikha Mukerjee | Bhoomi putra for Bengal: Has BJP made a mistake? 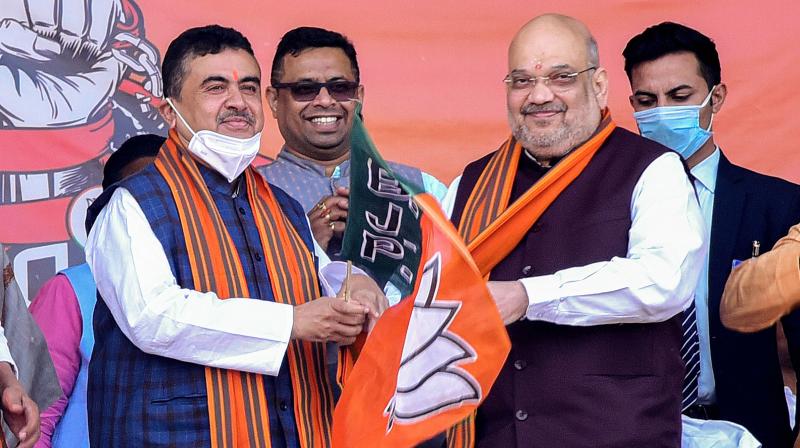 The man for all election seasons, Amit Shah, Union home minister and the BJP’s craftiest leader, came to West Bengal and radically revised the strategy for conquest. The state’s saffronisation has been Mr Shah’s goal for years.

With the acquisition of a “bhoomi putra” -- an experienced, violence-hardened, mass leader with charismatic appeal in Suvendu Adhikari from Trinamul Congress, Mr Shah has found a face to challenge Mamata Banerjee. Bengali identity, Mr Shah has had to acknowledge, transcends all the different ways in which the BJP slices and splices Hindutva issues to produce electoral victories with remarkable regularity.

It’s a belated realisation that neither the communal card, nor polarisation, nor verbal assaults against dynastic politics, would pose a serious threat to the fiery, feisty political war veteran Mamata Banerjee, who has charisma in loads and local knowledge that can outmatch the collective brains of the BJP machine. It’s also an admission that lightweight Bengalis as proxies for Narendra Modi would be dismissed with contempt by a culturally and politically fanatically proud people.

From one visit to the next in the space of a month, Mr Shah has finally realised that he has to back away from two issues he had identified as bestsellers in the West Bengal election market. The first is aggressively selling the Citizenship Amendment Act and National Register of Citizens as a cleanup mechanism to weed out Muslim illegals on the plea that it will be “considered” for action only after the Covid-19 vaccines are rolled out. The second is shooting down the idea that President’s Rule was being seriously considered before the West Bengal elections. Pulling no punches, Mr Shah seems to have told BJP state party chief Dilip Ghosh and West Bengal governor Jagdeep Dhankhar to pipe down.

These are sure signs that Mr Shah is only now beginning to gauge that West Bengal is the most complex undertaking he has ever had to handle. There is no template in the BJP’s playbook that can be copied and pasted over West Bengal.

To convince the voter that the BJP is not indeed an “outsider”, Mr Shah had to roll out Mr Adhikari and set him to work, the day after Christmas. The speed with which Mr Shah and the home ministry approved “Z” category security for Mr Adhikari even before he was formally inducted into the party at the Midnapore rally is an indication that it has a lot of catching up to do.

If the BJP was too complacent that its formula of communal polarisation, identity politics, homogenisation and mainstreaming within the Hindutva fold would be enough to convert the Bengali into a loyalist and thus reliable voter, the Trinamul Congress was just as smug. Obviously Mamata Banerjee can read the pulse of the people better than the BJP, which has inadequate leaders in West Bengal and out of state bosses who are clueless about the fiercely proud Bengali.

For both the TMC and the BJP, the defection of Suvendu Adhikari and nine other MLAs and MPs, as well around 100 lesser functionaries, is a turning point. As a young leader who led the Nandigram movement against the CPI(M)-led Left Front’s strategy for industrialising West Bengal, Mr Adhikari shot into the limelight. He became known for his capacity to match violence with violence and for his capacity to mobilise, equip and deploy the small army of TMC loyalists. He was rewarded for his work and elevated as a youth leader, as part of the successor generation to be groomed for the party after Mamata Banerjee. So indispensable was he, that in the 2016 Assembly elections, when Mamata Banerjee needed a robust organisation to win her seats in Purulia, Bankura and Jhargram and she felt Mukul Roy, now with the BJP, would not be as effective, Mr Adhikari was given responsibility for 60-plus seats. It was also her way of placating Mr Adhikari after the induction of Abhishek Banerjee, her nephew. The move angered many, including Mr Roy, who saw it as heaping favours on the Adhikari clan. Regardless of how her preference annoyed others in the TMC, Ms Banerjee continued to pamper Suvendu with greater responsibilities, like observer for the 2019 Lok Sabha polls for crucial districts in Malda and Murshidabad, long considered Congress bastions.

The network that Mr Adhikari built across at least seven districts out of a total of 23 in West Bengal, and his popularity, made him an asset for the Trinamul Congress. The BJP’s gain is thus the TMC’s loss. To capitalise on this, Mr Shah has drastically revised the BJP’s campaign content and strategy.

The plan is crude, and the BJP hopes it will be effective -- luring Mamata Banerjee into a personal fight against Mr Adhikari, who she was wont to see as a loyalist turned disgruntled defector with an insider’s knowledge of how the TMC government and organisation failed, its corruption, its dependence on a partisan bureaucracy and the police. It would challenge Mamata Banerjee’s credibility and her legitimacy as a leader.

The other advantage of a Mamata Banerjee verus Adhikari fight would mean there would be two foes against the lone chief minister. It would serve to situate the BJP’s best star campaigner, Prime Minister Narendra Modi, above the fray, with a solution to the problems of West Bengal by mainstreaming the marginalised, deviant locals.

The insider-outsider game set up by the BJP is theoretically neat. The question is -- will it be effective? West Bengal has always seen itself as a leader in national politics. To sink to the ranks of laggard followers could be unsatisfactory. The state’s chief ministers have always punched way above their weight, as they were politically important national leaders to begin with. Even though Mamata Banerjee was not a member of the social elite to which all her predecessors in office belonged, she was still a national leader, the successful leader of a party that she had founded, when she became chief minister. In contrast, Mr Adhikari is a local, perhaps too local.

The localisation of the BJP is far from complete. Adding a bhoomi putra is a design element and does not indicate a structural transformation. If localisation has indeed begun, it was difficult to find it, when Mr Shah’s roadshow snaked through Bolpur, with a DJ managing the event, and dancers and bands preceding the leader as though it was a carnival, and not a political rally.