‘America First’: A dark shadow for the world 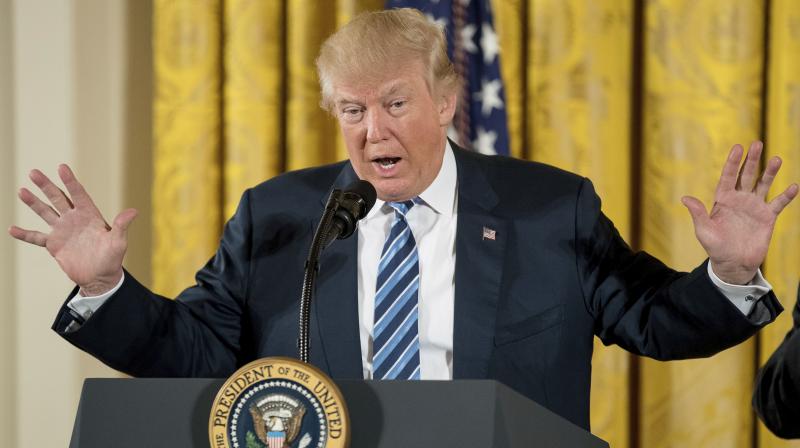 US President Donald Trump speaks during a White House senior staff swearing in ceremony in the East Room of the White House. (Photo: AP)

As America inaugurated its 45th President in Washington D.C. on Friday, the world waited with trepidation to hear President Donald Trump, the crusader for “Making America Great Again” and champion of the “forgotten men and women of our country”, spell out his agenda for the next four years.

Mr Trump emphatically restated old themes, combining populism and nationalism, standard fare in his pre-election stump speeches. The question being asked is whether he is overturning the post-World War II liberal order created under American leadership that ushered the birth of the United Nations at San Francisco, the Marshall Plan to lift both the vanquished and allied nations in Europe, the World Bank and Bretton Woods institutions to spread American aid and Nato to fashion a common defence. He achingly noted that the American dream is “redistributed across the entire world”. Richard N. Haass, president of the Council on Foreign Relations, was quoted by the New York Times that Harry Truman, Dean Acheson and others who followed had sought “World First” and not “America First”.

What does the phrase “America First” really imply? Basically, all nationalistic leaders ranging from President Xi Jinping of China to Prime Minister Narendra Modi of India want their own country’s interests held supreme. However, for the United States, as underwriter of global regimes, US “exceptionalism” has been about not only espousing liberal and democratic ideals, but spreading them globally. President John F. Kennedy had in 1961 committed his country to protect human rights “at home and around the world”. George W. Bush expended tremendous national resources attempting to plant democracy in Saddam Hussein’s Iraq and Talibanised Afghanistan. It is this evangelism that Mr Trump is now tampering with realism. The US will no longer drain its resources to protect allies or carry unevenly large weight in alliances. He is rejigging a phrase used by Charles Lindbergh in the 1930s to advocate US isolationism. He explained in an election-time interview that he was using it as a “brand new, very modern term”.

There was nothing modern in certain parts of his inaugural address that tackled the theme in clearly counter-globalisation and anti-free trade terms. He said US interests would take primacy over trade, taxes and foreign policy. His slogan “Buy American, Hire American”, which he tweeted immediately in bold letters, broadcast unadulterated protectionism, flouting international trade and investment regimes or agreements to which the US is a party.

But his dark worldview is fraught with contradictions and paradoxes, which will challenge his Cabinet while it is translating this into actual policy. Take his pledge to eradicate “radical Islamic terror” from the face of the planet. Many in India hope that it provides a ledge to rest India’s angst over Pakistani sponsorship of anti-India terror groups. But for him, so far, it seems limited to ISIS. Additionally he has not understood, despite US experience since 2001, that counter-terrorism cannot succeed without conquering the hearts and minds of Muslims simultaneously. President Barack Obama had attempted in 2009 in his address at Cairo University to do that, but the subsequent Arab Spring altered the framework. Mr Trump contrariwise has chided the United Nations over the UN Security Council resolution which condemned new Israeli settlements in occupied West Bank. Mr Trump also favours moving the US embassy from Tel Aviv to Jerusalem. Both or either of these acts will add to disaffection in the Islamic world. Furthermore, outsourcing the fight against ISIS to Russia while needling Iran will be a non-starter as those two countries are working in tandem to stabilise Syria, including by ruthless means like bombing Aleppo unmindful of the loss of civilian lives.

What does a Trump presidency augur for India? Clearly, there is cause for concern regarding US visa policies, that will hit information technology workers or even Indian students, as post-study job permits might be restricted. Mr Trump’s partiality towards Vladimir Putin may create convergence about fighting ISIS but not necessarily India’s terror problem. In fact, it may solidify the emerging Russia-China-Pakistan-Iran agreement that ISIS is the primary menace and that the Taliban in Afghanistan thus an automatic ally, and not an antagonist threatening the elected regime in Kabul. That would upend India’s Afghanistan policy.

Of greater interest to India should be Sino-US relations. A trade war can unleash forces that may damage China more than the US, which could up the ante by calling China’s bluff on its militarisation of artificial islands in the South China Sea in breach of the United Nations Convention on the Law of the Sea (UNCLOS). Contrariwise, Mr Trump may compromise on the South China Sea issue, accepting the status quo while barring more dredging and militarisation, provided his trade-related demands are met. Thus, it would be wise for India not to slipstream behind the US while remaining prepared to exploit the situation as it evolves. The US will attempt to outsource regional security duties to friends and allies as it reduces its own financial burden. India will have to hedge and balance.

The Trump presidency thus brings uncertainty as he experiments to resolve the paradox between “America First” and the interconnected nature of global economy and supply chains and US commitments to allies. For instance, trade with Mexico may be low single-digit as a portion of US GDP, but it affects at least five million US jobs. Similarly, counter-measures by China, reacting to the imposition of duties on their products, may have unforeseen effect on US households as costs rise. Mr Trump will discover that populism may be fine with a megaphone in hand or a Twitter button under control, but the Oval Office and the long arc of history will force reality on him. But one certainty looms — that the 45th US Chief Executive will always be “The Donald” before being President Trump.