Opinion   Columnists  22 May 2017  Trump’s Mideast foray to have fallout on India
Opinion, Columnists

Trump’s Mideast foray to have fallout on India

Trump came to power in Washington condemning the Iranian nuclear deal and praising the Russians. 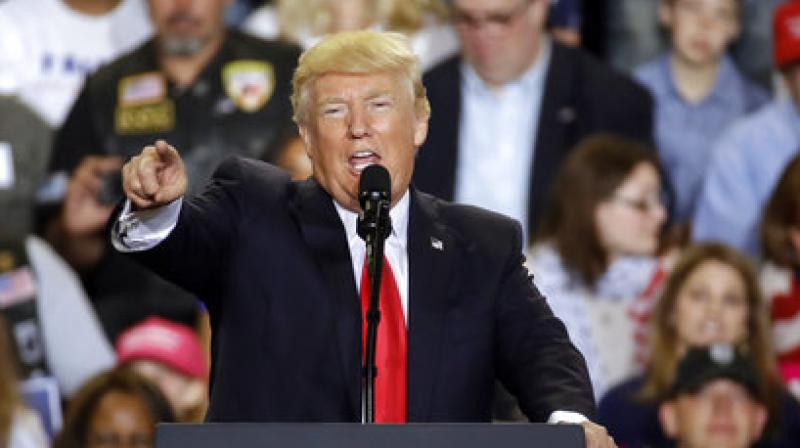 While India is preoccupied with Pakistan and the temporary reprieve for Kulbhushan Jadhav by the International Court of Justice on his execution, two events on the opposite sides of the Gulf will be reshaping the geopolitics of the region. US President Donald Trump was rebalancing US-West Asia and US-Gulf relations and Barack Obama’s overtures to Iran resulting in the P5+1 nuclear deal. Saudi Arabia had lamented the unshackling of Iran as it seemed to diminish American dependence on the Saudis for handling the Syrian imbroglio. Mr Obama had decided the Saudis were more a part of the problem than the solution. Thus Iran together with Russian air power and direct military intervention in late 2015 shored up the tottering Bashar al-Assad regime in Syria.

As a result, the Sunni opponents of Mr Assad, sponsored by the US, Saudis and their GCC compatriots, crumbled. The Iraqi Army, with US air support and Iranian military advice and muscle, rolled back ISIS, including from crucial northern city of Mosul. The Obama doctrine of outsourcing anti-ISIS ground operations largely to the Russo-Iran alliance and Hezbollah fighters from Lebanon was working. The US restrained Turkey from decimating resurgent Syrian Kurds who created a significant enclave in the northern Syria abutting the Turkish border, thus catching ISIS in a pincer move as the Assad regime’s forces pushed from the south and the west.

President Trump came to power in Washington condemning the Iranian nuclear deal and praising the Russians. The latter hobbles his presidency as an independent counsel, appointed by his own justice department, and the US Congress examine his links to Russian President Vladimir Putin and the inner circle at the Kremlin. But it was always unclear why Russia would abandon its key allies like Mr Assad and the Iranian regime as they were on the ground.

President Obama, despite reassurances, never managed to quite convince the Saudis that they had not been abandoned by the US. Meanwhile, the rise of young Mohammed bin Salman, the favourite son of King Salman and current deputy crown prince, as the power centre saw the Saudis rashly undertake military operations against Iranian allies like the Houthis in Yemen. The war has been a failure as the Houthis still hold San’aa, while the population caught in the middle suffers. The war reportedly costs the Saudis US $200 million per day. President Barack Obama, in an April 2016 interview in The Atlantic, suggested that the Saudis should be prepared to “share the neighbourhood with Iran”. The Saudis conveyed their displeasure during President Obama’s farewell visit to the kingdom after the interview by blocking live television coverage of his arrival and not having the King receive him on arrival. On the other hand, Mr Trump has received the full treatment, including being met at the airport by the King.

Protocol aside, defence deals were finalised amounting to $110 billion, negotiated by Mr Trump’s son-in-law Jared Kushner. In addition, $250 billion of commercial investment and over the next 10 years more military sales, thrice the current deal, have been promised.

This rebalancing has significance for India. First, Mr Trump, despite threatening to undo the Iran nuclear deal, had quietly, on the eve of his Saudi visit, extended the suspension of US sanctions. This signal probably helped President Hassan Rouhani’s massive win. Confrontation would certainly have aided the conservatives aligned with his principal opponent. A reinvigorated Mr Rouhani, in his first post-victory address, indirectly challenged the reactionary forces by publicly lauding former President Khatami, something banned by the judiciary due to his opposing President Ahmadinejad in the 2009 election.

Second, the presence of Pakistan’s Prime Minister Nawaz Sharif at the Riyadh summit for crafting an anti-ISIS and anti-Iran alliance is bound to embitter Iran-Pakistan relations. India-Iran relations, despite the surface bonhomie, have lacked either confidence or depth since India’s decision to back the international community at the IAEA over the Iranian nuclear programme since 2005.

Iranian partnership becomes crucial to balance the Sino-Pak convergence and the China-Pakistan Economic Corridor (CPRC), as indeed the larger Chinese Belt and Road Initiative (BRI). Russia and the Central Asian landlocked nations are keen to hedge their bets by supporting the North-South transit corridor to link Russia to the Gulf. The development of Chabahar port should be seen in that context. Interestingly, the Iranians were quiet till a fortnight back over the Kulbhushan Jadhav issue despite the Indian allegation about his abduction from Iranian soil. Their collaboration would be vital to negating the Pakistani concoction about his arrest in Balochistan.

President Trump, during his 2016 election campaign, had alleged that the Saudis were behind the 9/11 attack on the US in 2001. He had also claimed that “Islam hates us”. His rusted adviser Steve Bannon, who has made a career out of Islamophobia, was seen sitting sheepishly next to a Wahabbi cleric. His secretary of state Rex Tillerson has advised Iran after the Rouhani victory to curb missile testing and not support terror groups. More harsh words are likely as the Riyadh summit proceeds.

Mr Trump next heads to Israel, having already hosted Palestinian President Mahmoud Abbas in Washington. Mr Trump’s agenda is wide-ranging. He wishes to resolve the Israel-Palestine dispute, wean away Russia from Syria and Iran to resolve the Syrian imbroglio and contain Iran and its burgeoning Shia alliance. He does not want to intervene militarily, but his generals in civvies are beginning to convince him that alliances need leadership, which only the US can provide. As a hotel-casino owner he must know that it is the dealer who always wins, not the gambler. His current sojourn will decide which role he chooses.