American Presidents are also influenced by their social and professional backgrounds. 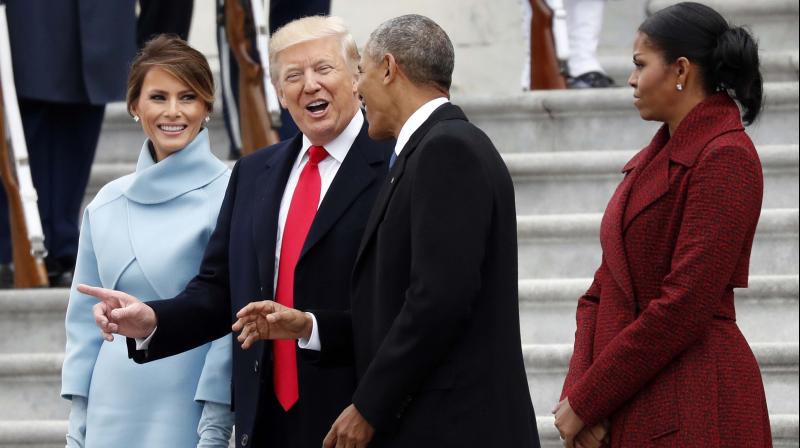 US President Donald Trump and first lady Melania Trump talk with former President Barack Obama and Michelle Obama during a departure ceremony on the East Front of the U.S. Capitol in Washington. (Photo: AP)

Every election, irrespective of the verdict, is a process of catharsis and renewal. One of the remarkable features of the American system is the manner in which an incoming President has the mandate for a clean-sheet redesign. A new President arrives, from a big city or a small town, from the coasts or the Midwest or the Deep South, and is allowed to reshape and reimagine Washington, DC.

He is given the leeway to make his appointments, bring his ideas into policy, and give a new direction to his country’s foreign and economic priorities and its engagement with the world, as well as project his vision for American society upon its people.

Obviously political disagreements and partisanship play their part. There is also the permanent Washington establishment, the civil service, the members of Congress, some of them political veterans who have arrived before many Presidents and have outlasted those same Presidents. Even so, every four or eight years, a new leader gives Washington, DC, a new roadmap and, thereby, since this is the most powerful country in the world, influences global trajectories.

America has elected very different people as Presidents. President Barack Obama and his predecessor, President George W. Bush, were far removed from each other. Mr Obama is professorial and could in another life have been a college don. Mr Bush was more instinctive. They brought different sensibilities to the White House, as did their predecessors.

American Presidents are also influenced by their social and professional backgrounds. Ronald Reagan was an actor who had lived through World War II and the formative phase of the Cold War. Herbert Hoover was a renowned mining engineer with business interests in Australia, Russia, Myanmar and several other countries. At one point he was among the world’s best-paid business executives. Woodrow Wilson, the only American President with a PhD, was president of Princeton University. Dwight D. Eisenhower was a popular general. Jimmy Carter was a peanut farmer. Franklin D. Roosevelt was a New York aristocrat, born to one of the East Coast’s oldest and most privileged families.

This is very different from a culture such as we have in India, of career politicians and political activists, who do nothing but politics from their early 20s. It gives successive American Presidents inputs and thoughts on how the government should be run, on how the citizen should be engaged, on how policy should be put in place. Obviously not every President gets it right, but the point is America gambles with its diversity every four or eight years.

In a sense, America has institutionalised this change and this invocation of diversity by giving its Presidents only two terms. This guards against policy fatigue or jadedness and impels a new thinking after a maximum of eight years. Traditionally, and at least in the post-war period if not for much of the 20th century, former Presidents have walked into the sunset and shunned political debate. There have been exceptions, of course, such as Ted Roosevelt who came back to stand in the 1912 election, but for the most part that tradition has been maintained.

There are several reasons for this. A former President, irrespective of whether he has been rejected after one term or constitutionally debarred after two, is no longer seen as being a political player. This is unlike Westminster democracies such as the United Kingdom or India, where a defeated Prime Minister can hope to come back in the next election cycle and could choose to remain in competitive politics.

In the US, on the other hand, the former President goes home, sometimes literally and to the town he was raised in, builds a public institution, it could be a library or a charitable foundation, and seeks to cement his legacy as a statesman. Of course, not all are successful but that is immaterial here.

President Bush was a model in this regard. As he told a Delhi audience, he didn’t appreciate former Presidents giving him advice through the media when he was in office, and he was determined to give his successor space, and not keep telling him what to do. His time was over, his legacy (Mr Bush’s legacy), of which he remained confident, would be judged by history.

The challenge to Mr Obama and the Democrats from the Republican camp would have to come from another source, some other leader and presidential aspirant. It was not a former President’s job to be leader of the Opposition. That role had to devolve to another generation or at least another politician.

At best a former President has the right to defend himself from what he believes is unfair criticism of his legacy and record in office. He has little business, at least in the American way, of criticising policy steps and innovations introduced by his successor.

Will Mr Obama follow this model? The signs are intriguing. In 2008, he came to office campaigning as the man from Chicago, from outside the cosy Washington, DC, consensus. He has decided, however, to stay on in the capital after leaving office, a non-departure that is fairly uncommon for outgoing American Presidents, many of whom make much of the photo-op that comes with the moment when they “board the plane going home”.

Mr Obama could have several motivations. He may be worried by the partisanship of the moment, and concerns that President Donald Trump will not settle into governance mode but continue to be a bitter campaigner, provoking his adversaries and constantly ridiculing his predecessor. One would hope that doesn’t happen and the new President moves on in a few weeks.

Yet, Mr Obama’s very presence and regular interventions — should he choose to make them — will not hasten that process. Indeed, the more he intervenes, the more difficult it will be for America to put the passions of the election behind it. That responsibility is Mr Trump’s. Does Mr Obama really want to push himself to share the burden?

A more pragmatic explanation is age. Mr Obama is 55, Bill Clinton was 54 when he left office and Mr Bush 62. There is a reasonable expectation that all three will live another 25-30 years after leaving the White House. There is also the paradox that members of Congress have no term limits and it is not unusual for elected legislators on Capitol Hill to be active into their 80s. For someone who exits the White House in his 50s, this would seem unfair — and make the post-presidency somewhat fidgety.