The purpose was to announce the alliance as a nearly formed fighting machine against the BJP. 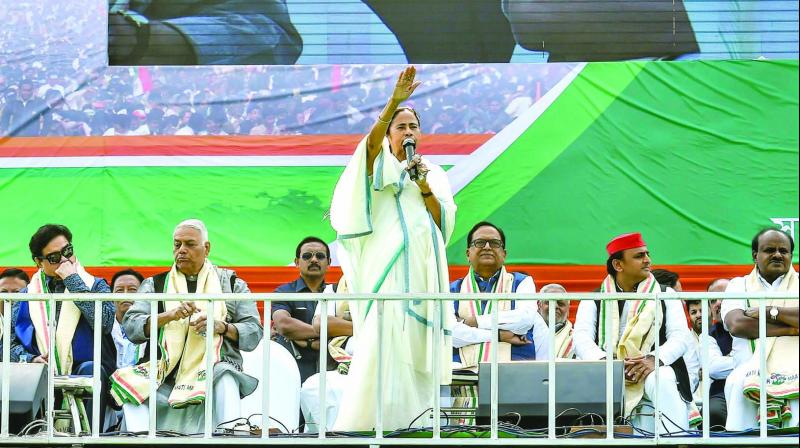 It’s not a Third Front. The United India Alliance that came into being on January 19 at Kolkata’s Brigade Parade Ground is a partnership of experienced, though not as yet mature, regional parties armed with a purpose, the defeat of the idea that the Bharatiya Janata Party represents.

The rally was a historic moment, with a long past. It was not a panicky response of the political class to a dominant and disliked national party with dreams of becoming a hegemonic power. It was a planned event of 23 parties, including the Congress, where 30 leaders spoke about defending democracy, the secular character of the country and protecting the Constitution from being subverted, rescuing diversity from the BJP’s homogenising drive. It was also a line where for the first time there were no parties representing the Left. The Communist Party of India (Marxist) was missing, as were its partners.

The purpose was to announce the alliance as a nearly formed fighting machine against the BJP. The purpose was not to hint at who would be the face of the alliance; Mamata Banerjee played host and facilitator, but she was very controlled about not signalling her possible ambitions to be Prime Minister. What was apparent was the regional parties and the Congress had worked to create the moment, through a series of meetings, with photo ops and undoubtedly innumerable conversations off camera and off the record.

The alliance sends out two equally powerful signals — it challenges the BJP’s idea of a strong Centre controlling the states, because the United India Alliance stands for strong states controlling the Centre to defend secularism, diversity and democracy from the grassroots. The collective and individual experience of the leadership that was lined up at the rally — 23 parties and 30 speakers, upends the BJP’s argument that the UIA is a headless khichri with too many cooks and no leader. It was a sly reminder that Narendra Modi was once upon a time a chief minister, whose success was big enough to make him a poster boy for the BJP-Rashtriya Swayamsevak Sangh and project him as the Prime Minister in 2014.

The message was strong and convincing enough to provoke Narendra Modi to react to it almost immediately, declaring it an alliance against the BJP for the simple purpose of protecting the leaders from the various investigations into their corruption.

Coalitions have been formed to defeat the dominant party at the Centre since 1977. Then it was the Congress, in 1996 it was the first BJP government led by Atal Behari Vajpayee. Uncertainty made each of those experiments unsuccessful, because there were two strong sentiments that worked within the coalition. There was suspicion and rivalry between parties that remained unresolved even as they joined up to form the coalition. And there was a hangover that the leader of the coalition had to be a statesman, with vast experience and sophistication. Hence in 1996, the prime ministership was offered to Jyoti Basu, not once, but twice.

The United India Alliance’s message and its model of states and the Centre as equal partners in governance and policy-making is a departure from the idea of a Third Front, where the focus was on the coalition being neither BJP nor Congress, but an alternative. This new venture is different. It is an assertion by the states of their proximity to the people and the challenges of governance that they tackle. In the past, the narrative of government was all about top down governance, in which the states “implemented” the policies, schemes and programmes of the Centre; regional parties with limited experience were inadequate to govern at the Centre; and that their leaders had a narrow vision in contrast to the national parties.

Two decisions from the alliance indicate that much work had been done in the background before the formal launch. The announcement that there will be a Common Minimum Programme drafting committee and a four-member team, headed by Abhishek “Manu” Singhvi of the Congress, to draft a note on EVMs as an unsatisfactory tool for voting, “chor machine” in Farooq Abdullah’s words, suggests that the 23 parties had progressed way beyond the optics of the rally and the hand-holding exercise that has become mandatory after the swearing-in of the H.D. Kumaraswamy government in Bengaluru.

The alliance at its moment of birth seems cohesive and coherent. It has certainly rattled the BJP. The uncertainties of resolving the nitty-gritty bits like how will the problem of one candidate for one constituency be tackled in places where there are multiple and equally vehement claimants. It is not easy to imagine that in every constituency where a consensus alliance candidate is nominated all the votes from all hitherto rival parties will be neatly transferred. That is not how it really works in politics. There is nothing elegant about political dynamics at the grassroots.

With a little over two months to go for the 2019 general election to get under way, there must be as much speculation within the alliance as there is in the BJP and among voters on who will lead it, should the alliance win? There were voices in Kolkata that clearly called for Mamata Banerjee to lead the alliance as Prime Minister. West Bengal’s “tigress”, as Arun Shourie described her, was far more circumspect; she played the role of a facilitator to the hilt, which subtly underlined her qualifications for leading a multi-party government.

In many ways, the Kolkata rally was like a regional round in an intensely fought contest. In this one, Mamata Banerjee was the favourite. In subsequent such rallies which were suggested in other parts of the country, the favourites will no doubt be other leaders. The underlying assumption is that the Congress Party would not be in a position to assume the leadership. It would be hard to believe that all such scenarios have not been imagined and are not being negotiated.