Will Mideast be first flashpoint for Trump?

The future Trump administration will be likely to start a new tempest in the Muslim and Arab worlds. 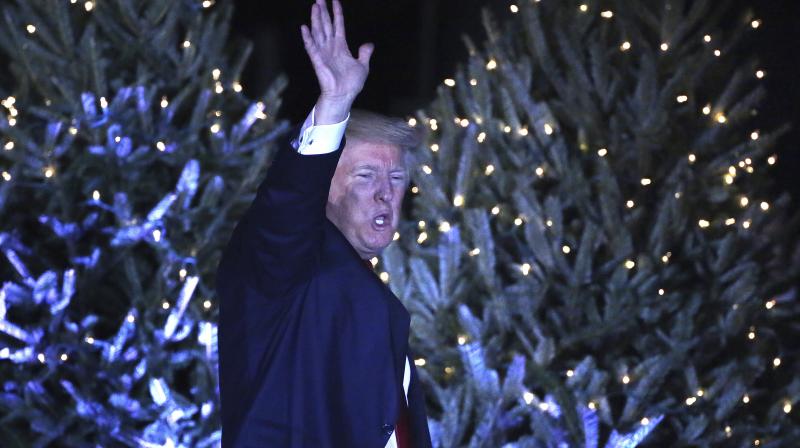 President-elect Donald Trump responds to cheering supporters, in front of a backdrop of Christmas trees, at a rally in Orlando, Fla. (Photo: AP)

US President-elect Donald Trump has made many controversial and outlandish appointments for his future Cabinet. But even more surprising than naming rich billionaires like himself and a string of outspoken generals he has gathered is the appointment of his country’s ambassador to Israel. David Friedman is an orthodox Jew and son of a rabbi, who owns an apartment in Jerusalem and justifies illegal Israeli settlements on Palestinian land. He greeted his new post with the declaration that he looked forward to working “from the US embassy in Israel’s eternal capital, Jerusalem”, rather than Tel Aviv.

This appointment, that baffled Americans and the world, comes after Mr Trump’s boast in an interview that he would make the “ultimate deal” between Israelis and Palestinians. Daniel Kutzer, a former US ambassador to Tel Aviv, declared “Mr Friedman should be beyond the pale”. Others have simply thrown up their hands in despair at the appointment of a bankruptcy lawyer who has taken up some of Mr Trump’s cases with no diplomatic experience broadcasting hardline views crossing all the red lines.

In a sense, Mr Trump has made explicit what was implicit in US policy over decades, a bias towards Israel due to military and regional factors and the strong US Jewish lobby, which has the ear of both Republicans and Democrats. The most American leaders have been able to do to discipline Israelis are slaps on the wrist.

Two myths US administrations have carefully nurtured are an ambivalence towards Jerusalem’s status, sacred to both Jews and Arabs, its embassy functioning from Tel Aviv. Second, the US has officially viewed Israeli settlements as being illegal, with the suggestion that large border settlements can be swapped for Israeli territory. Significantly, Israelis greeted Mr Trump’s poll victory as a signal for announcing new settlements.

Israel has in office the most right-wing government in its history under Benjamin Netanyahu. The official fiction is of a two-state solution, with Israeli and a defanged Palestinian state living side by side in peace. But the policies of the present administration have been making the constitution of such a state, opposed by the Prime Minister’s allies, impossible. Officially, Washington still swears by the virtues of two states without possessing the will or domestic support to bring it about. In contrast, the US recently signed a whopping new military aid package for Israel.

Washington has refrained from moving its embassy from Tel Aviv to Jerusalem for nearly seven decades because it has been conscious of the emotive overtones of a city revered by Jews, Christians and Muslims. Even for a nonconformist President, to appoint an envoy who openly advocates illegal settlements does not make sense. Mr Friedman for one has described President Barack Obama as being “anti-Semitic”.

There has been much debate in the United States and Europe among liberal circles and the broad consensus is that if the Israeli state continues building settlements to swallow the occupied West Bank, apart from having annexed Arab East Jerusalem, it cannot remain a democratic entity. Although there is a strong minority not in favour of current trends in the country, it seems to have lost heart and its main argument. The populist streak apparent in the United States and Europe is in favour of  demagogues in Israel.

Against this backdrop, what does the future hold for Israel, the region and foreign backers, the US in particular? Palestinians themselves are in a sorry state, with Mahmoud Abbas, leader of the Palestine Liberation Organisation, well past his term, and divisions in Palestinian ranks in the shape of Hamas ruling the shattered Gaza Strip with an unfriendly Egypt making people’s lives as miserable as the consequences of Israeli  policy.

Mr Friedman is on record in the US on refusing collectively to talk to the “J Street”, a moderate parallel to the main American Jewish lobby. But if he were to follow his plan to move the US embassy to Jerusalem with Mr Trump’s blessing, Palestinian frustrations would boil over and it would become an issue the whole Arab world would identify with. Thus far, Palestinian reaction to the appointment has been muted, but Jerusalem can light the banner of revolt in an instant with serious consequences for Israel’s future trajectory.

American legislators’ room for manoeuvre on any question over Israel is limited across party lines. They have a powerful lobby group that can blackball any political aspirant and deny him the money power they possess. Issues of freedom and justice for Palestinians living in Israel denied rights as citizens cannot be raised by mainstream politicians who must look over their shoulders to ensure Jewish lobbyists are not cross with them.

US administrations of both main parties have routinely supported with money and arms countless dictators in the Middle East and Latin America for reasons of realpolitik, and still do so even as they broadcast the merits of a liberal democracy. But the future Trump administration will be likely to start a new tempest in the Muslim and Arab worlds by striking at the Islamic faith’s heart by the implied recognition of Jerusalem as Israel’s exclusive holy land. They would also have to contend with Christians, who believe in Christ’s provenance in Jerusalem.

It’s difficult to believe Mr Trump and his transition team are unaware of what they are bargaining for. If the President-elect’s purpose is to shock Palestinians into conceding their foremost dream, he will be disappointed. There isn’t a more emotive issue in the historical struggle between Jews and Palestnians than Jerusalem. And here is a Jew sent as America’s envoy, assuming he gets the Israel-friendly Senate’s approval, believing that his first task would be to move his country’s embassy to Jerusalem to fortify Israel’s claim of it being its “eternal” capital.

There will doubtless be other surprises up Mr Trump’s sleeve, but in its explosive potential few things will surpass Mr Friedman’s appointment.