Nor has the Narendra Modi government been deaf to the needs of the farming community. 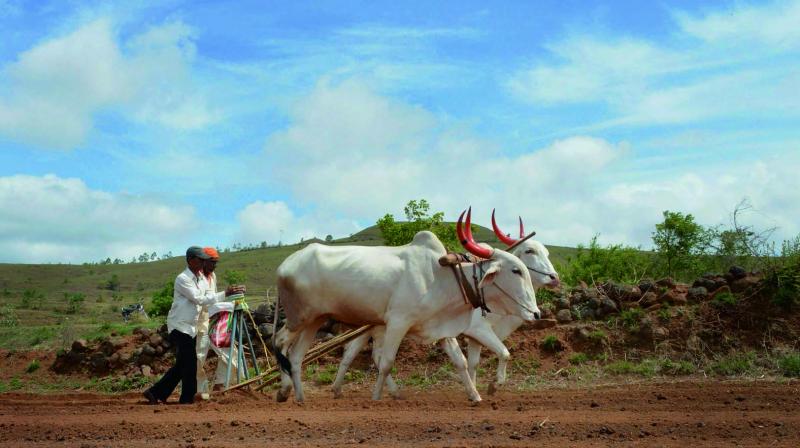 Rural education levels need to be enhanced. Shockingly, 30 per cent of farmers, across all classes of holdings, including large farmers, are illiterate. (Representational image)

Agriculture’s contribution to economic value addition is shrinking worldwide. But that is cold comfort for the families of 118 million small and marginal farmers in India, comprising 85 per cent of the 139 million land holdings.

Agriculture is privately owned and managed. We cannot blame our ersatz socialist past for its poor productivity —one-half in cereals and one-fourth in pulses — relative to China. Not all of it has to do with the small and shrinking average size of our farm holdings — 1.15 hectares in 2011-12. In China. 62 per cent of the land holdings are less than 0.5 hectares, similar to India, where 67 per cent of land holdings are below 1 hectare.

Nor has the Narendra Modi government been deaf to the needs of the farming community. But interventions have been technocratic and humdrum. More crop per drop — drip irrigation is good for conserving water and its sustainable use in water-starved India — but it has no teeth to push farmers to invest in it. Why bother when canal irrigation — admittedly available only to 12 per cent of farmers — is practically free? The remaining 35 per cent with irrigated land rely on ground water where electricity is free, or nearly so.

The practice of assuring a Minimum Support Price (MSP) for agricultural produce by state procurement agencies — like all other cost plus interventions — also works against farmers becoming more efficient. Enhancing the use of soil testing to optimise the use of chemicals is academic unless it is linked to how much fertiliser a farmer can get at subsidised rates.

Fourteen state governments have responded to the Centre’s nudge to digitise following Karnataka’s lead in adopting an e-trading platform for agricultural produce for better price discovery. Sadly, of the 2,477 Agricultural Produce Markets (APMs) with 4,843 sub-yards, less than 10 per cent are reported to have implemented the scheme.

Liberalising agricultural trading is critical. APMs are inefficient because farmers have to sell their produce through them. A model Central legislation in 2017 encouraged states to exempt vegetables and fruit from the monopsony of the APMs; reduce the tax levied by APMs and cap the commission charged by licensed agents to two per cent for non-perishable produce. Only Maharashtra has exempted fruits and vegetables. States are reluctant to dilute the monopsony powers of the APMs or to decartelise licensed commission agents.

Change in agriculture is in the slow lane. Political economy considerations advocate leaving farmers, as a group, undisturbed to settle their affairs internally — an approach close to walling off or ghettoising the ungovernable. Unfortunately, this means continuing the package of subsidies which benefit larger farmers. These subsidies — purchase above market rates; fertilisers supplied at below market rates; electricity supplied at below cost; canal water supplied at below cost, even the fixed cost — together account for one per cent of GDP or around Rs 1.7 trillion. If interest subventions and loan write-offs are included, this amount would double. The real problem is not the volume of subsidy but how poorly it is targeted. Subsidies benefit only 25 per cent of farmers — the larger ones with political power.

Two key initiatives can help without wrecking the delicate political economy compact or enhancing the subsidy further. First, rural education levels need to be enhanced. Shockingly, 30 per cent of farmers, across all classes of holdings — including large farmers — are illiterate. Only 23 per cent have studied up to Class 5 and a similar proportion up to secondary level. Given our poor education outcomes, this leaves three-fourths of farmers unable to acquire the basic STEM (science, technology, engineering and math) skills to work with and extract efficiency from the digitised machine age we are now entering.

Farm incomes can be doubled if we get around 100 million workers off the land and into industrial occupations. But this will not happen unless rapid human capital development strategies are delivered to small and marginal farmers. Educating them better can free them being dependent on farm incomes and reduce inequality. Second, most small and marginal farmers miss out on selling their produce at the MSP to a state procurer, particularly when there is a glut of supply and prices are low. Only around one-third of agricultural produce is currently procured by state entities, which is then fed into the public distribution system with a subsidy of more than 90 per cent on cost or released into the market to stabilise food prices.

Production, procurement and warehousing, processing and retail supply are all segregated segments of the value chain today. Bundling all these activities under one management can enhance efficiency. Consider that the cost of crop purchase (what farmers earn) in the total cost of food supplied through the public system has reduced from 71 per cent in 2001 to 67 per cent in 2018, even as the share of the procurement and distribution operations has increased from 29 per cent to 33 per cent.

The food subsidy estimate of Rs 1.7 trillion in 2019 includes the cost of around 33 per cent on account of waste in storage and transportation. This is the efficiency gap which can be extracted by bringing in large corporate private players with deep pockets to procure agricultural produce from small and marginal farmers at the MSP. The higher cost of purchase — around 15 per cent — versus the market cost, can be more than offset by efficiencies in storage, transport cost and better realisation from processing and branded retail supply directly into the open market.

The growth benefits from the 1991 economic reforms in industry and services are petering out. Why ignore the low hanging fruit in agriculture? Indonesian agriculture grows annually at three per cent, or at 70 per cent of the GDP growth rate (five per cent). Indian agriculture grows annually at 2.5 per cent, or at one-third of the GDP growth rate (7.4 per cent). We are missing out on 0.2 per cent of GDP growth and higher incomes for 200 million poor farmers.