Opinion   Columnists  16 Jul 2017  Asking for an inquiry is not anti-national
Opinion, Columnists

Asking for an inquiry is not anti-national

It is true that there can be no foolproof shield against a committed terrorist. 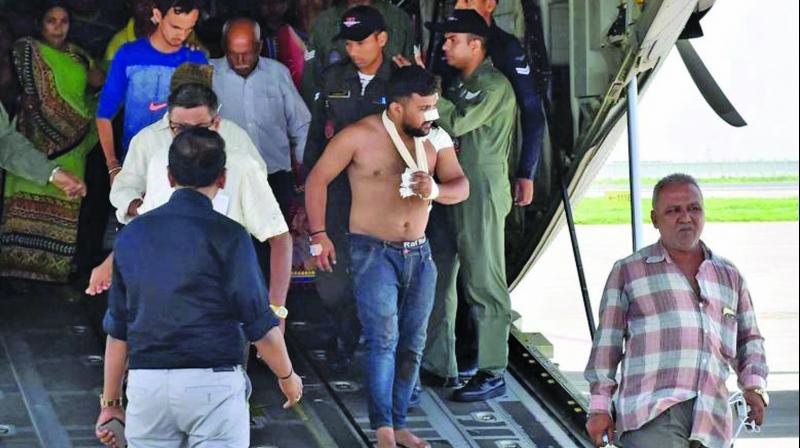 Amarnath pilgrims who were injured in the terror attack being brought by an IAF plane at the airport in Surat. (Photo: PTI)

On July 10, 2017, terrorists attacked a bus carrying pilgrims who were part of the annual Amarnath yatra. Such an attack on pilgrims, which claimed the lives of seven Hindu pilgrims of which six were women, took place after a decade and a half. It was a barbaric and inhuman attack, with the specific aim of creating communal tension and worsening the already tense situation in the Valley. All political parties emphatically condemned the attack, as did ordinary Kashmiris irrespective of whether they were Hindus or Muslims.

The terrorists who perpetrate such dastardly crimes know that the Amarnath shrine is a symbol of Kashmiriyat, where Muslims and Hindus have a common stake in the preservation of a religious tradition that has been nurtured by both communities. Although the shrine has very ancient origins, it is well-known that a Muslim shepherd, Buta Malik, rediscovered the Amarnath cave some 150 years ago, and even today his family receives some part of the alms offered by pilgrims. The Hindu devotees who flock in lakhs for the annual pilgrimage provide income to Muslims in the tourist industry in J&K. The entire event binds residents of the Valley in a shared project, and is a symbol of the composite culture that underlines this troubled region.

It is true that there can be no foolproof shield against a committed terrorist. This is particularly so in Kashmir where jihadis trained, funded and equipped by Pakistan are sent across the border and have misguided or brainwashed supporters among the local populace. It is precisely for this reason that elaborate security arrangements on a massive scale are made for the yatris every year. Terrorist attacks during the 48-day July-August annual Hindu pilgrimage have occurred in the past. In August 2000, pro-Pakistan Islamic terrorists from the Hizbul Mujahideen massacred 21 unarmed Hindu pilgrims, seven Muslim shopkeepers and three security force officers. In July 2001, terrorists threw two grenade bombs and fired indiscriminately on a pilgrim shelter killing 13 and injuring many more. In August 2002, terrorist from al-Mansuriya, a front group of the Lashkar-e-Tayyaba, massacred nine pilgrims and injured 30 (including several Muslims) near the Nunwan pilgrimage base camp.

It is no mean achievement that for the last 15 years our security forces managed to foil or prevent terrorist attacks during the yatra, in which the number of pilgrims are measured in lakhs, and they trek unarmed through territory vulnerable to ambush and attack. And yet, if such an attack did recur, is it wrong to ask whether the attack was preventable? Was there any element of negligence or lack of planning and anticipation, or improper intelligence appraisal that enabled terrorists to strike again? For instance, there are reports that an intelligence alert about the possibility of such an attack was issued by the SSP of Anantnag in the last week of June. Was this intelligence ignored, or was the intelligence alert itself worded in much too generalised a way, so as to make concrete follow-up difficult?

To ask such questions is a perfectly legitimate exercise in a democracy that is premised on the principle of accountability of those in authority. It is one thing to mindlessly politicise tragedy by blaming reflexively and only for the purposes of short-term political gain, a political opponent. In the aftermath of a tragedy, there is something distasteful in trying to score political brownie points. But is one anti-national if, in the interest of preventing such attacks in the future, one asks for an inquiry into why this attack happened, so that lessons can be learnt and the guilty, if any, can be identified and responsibility be fixed?

I would think not. But it was surprising that many in the BJP, both at the Centre and in the BJP-PDP alliance in the state, took precisely such an approach. Even more surprising was the endorsement provided by several media channels. A hysterical tirade in the name of nationalism was carried out against anyone who had the temerity to ask any questions on whether such an attack could have been prevented. Even those who constructively suggested that an inquiry should be held so that any intelligence failure or administrative lapse could be identified and corrective action taken for the future were dismissed out of hand as anti-national.

Frankly, the attempt to invoke nationalism to cover every act of omission or commission committed by the ruling dispensation has gone much too far. While many in the Opposition seek to play a constructive role and unhesitatingly laud the government on many of its security initiatives, such as the surgical strike against the Pakistani Army along the border (even though the ceasefire violations by Pakistan and terrorist action has shown no sign of abating since then), the BJP, with full support from some sections of the media, has used nationalism as a shield to evade accountability whenever there is a security breach by simplistically but aggressively labelling those who ask any questions as anti-national.

In this particular case, even the Shiv Sena, a BJP ally, minced no words in blaming the ineffective BJP-PDP alliance and the BJP government for the failure to stem the continuous terrorist attacks in Kashmir. Is the Shiv Sena then anti-national? And would the BJP, if such an incident would have happened when a non-BJP government was in power at the Centre and in the state, been less than strident in its immediate criticism? Any attempt to counter such criticism would then have been labelled as anti-national! Double standards in politics can go only so far before they are revealed to be what they are.

This being as it may, the real hero in this ugly and tragic episode is Saleem Mirza, the driver of the bus that was attacked. It was his courage and presence of mind that saved the lives of many more pilgrims. When hailed for his act of bravery, he simply said, “God gave me strength to save lives of people.” In this simple statement lies the reason why India will survive all attempts to break it.