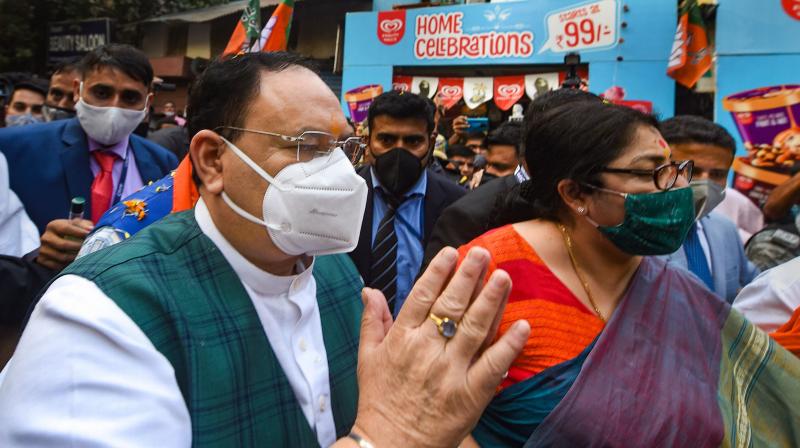 Bullets, bombs, bricks; broken glass, bruises, broken bones, blood and death. The BJP’s offensive in West Bengal has not been a peaceful, orderly and rapid occupation. It has been a laborious endeavour, with the party’s popularity waxing and waning.

To sustain the 40 per cent votes it polled in the 2019 Lok Sabha polls, the BJP will have to deal with the physicality of the political space it so ardently wants to capture. And West Bengal’s political culture, its history and traditions require the BJP to do much more than verbally assault the Trinamul Congress bastion. It will have to find the resources and the skills to match the confrontational capability of the state’s ruling party.

Claiming that it is the victim of the Trinamul Congress’ aggression may not be enough for the saffron party. The bricks that were hurled at the party’s president J.P. Nadda on his way to a meeting in Diamond Harbour may have shocked the BJP and shaken Mr Nadda who, incidentally, was not injured because he was travelling in a bulletproof car, but the response to the obviously pre-planned attack is sadly feeble.

Bricks hurled at VIP convoys are par for the course in Indian politics. In August 2017, Rahul Gandhi’s convoy was attacked with bricks in BJP-ruled Gujarat when he was vice-president of the Congress. The BJP did not apologise for the incident; it was dismissed as “unfortunate” and Mr Gandhi was verbally attacked for making the visit.

Warning that the Union home ministry would hear of it, orchestrating a media offensive on the “anarchy, lawlessness and intolerance” prevailing in West Bengal, declaring that orderly democratic politics was no longer possible, by the 2017 incident measure, is a serious overreaction. It falls short of a politically savvy response. Even with the state governor, Jagdeep Dhankar, weighing in and declaring that Mamata Banerjee was “playing with fire”, that there was a “deterioration” in the law and order situation in the state, that he had written a special report and sent it to the Government of India because it was an attack on the “leader of the national party,” the BJP missed its chance of using the situation to deliver a political punch.

Having taunted both the “bhaipo” or nephew, Trinamul MP Abhishek Banerjee, and the “pishi” or paternal aunt, chief minister Mamata Banerjee, for an unholy nexus, accusing her of fostering “dynasty” by cutting out senior leaders of the Trinamul Congress who in their disenchantment were waiting to defect to the BJP, the visit to Diamond Harbour was a red rag that Mr Nadda waved. If the reaction shook up the “leader of a national party,” it ought not to have surprised him.

The BJP leadership needs to get it -- that West Bengal is, like many other places, a mass of contradictions. Its people write and recite poetry even as they make bombs, perhaps plan to attack the convoys of VIPs and create chaos. In West Bengal, politics, peaceful demonstrations that are always edgy with the possibility of violence, poetry and piety coexist in perfect harmony. A familiarity with Rabindranath Tagore and Swami Vivekananda is not enough. The BJP needs to delve into Sri Aurobindo’s evolution to begin getting a glimmer of an understanding of what is a Bengali. For that matter, the BJP needs to know that Swami Vivekananda had a brother, Bhupendranath Dutta, who was a member of the “Jugantar”, an organisation that believed in armed opposition to British imperialism, and who joined the Ghadar Party, toyed with the Comintern, met Vladimir Lenin, and then joined the Congress Party on his return from travels in the United States of America, Germany and the Soviet Union.

The BJP in West Bengal needs to create a playbook that is in sync with the political culture of the state. Using the Government of India as a bogeyman or a shield can be effective only in very limited ways. Having imported large numbers of workers from the Left Front as well as the Trinamul Congress, it has to know how to deploy these resources most effectively.

And the BJP has to work out how politically useful it is to constantly trash Mamata Banerjee. She is a grassroots leader. If the BJP really thinks that encouraging the governor to publicly reprimand the bureaucracy and the police in West Bengal for being an extension of the ruling party and then amplifying the message is savvy politics, it does badly need to have a rethink. However deplorable and however cynical it may be, voters are unlikely to be scandalised about non-specific accusations of the police-politician nexus in West Bengal, or even across India. It is passé.

Taking on Mamata Banerjee by publicly discrediting her shortcomings as chief minister or making personal attacks about her probity can be the frills on something much more substantial. By itself, accusing the Trinamul Congress of corruption does not work.

The BJP needs to reread the history of Mamata Banerjee’s hard labour before she became chief minister. She fought the CPI(M) on the streets for decades. She was relentless in her criticism of the Left. In 2001, Mamata Banerjee thought that she would win. In 2006, she again thought she would win. She finally won in 2011 and what a spectacular victory it was -- chief minister Buddhadeb Bhattacharya lost the elections as did droves of his Cabinet colleagues and of course sundry CPI(M) and other Left party candidates. It was a bloody, pitched battle that Mamata Banerjee fought to oust the CPI(M)-led Left Front. And she did not have the limitless resources that the BJP seems to as a party and the resources it has as the ruling party of the country.

The signs of disenchantment with the Trinamul Congress and disappointment in Mamata Banerjee are growing stronger. But that does not make West Bengal any easier for a BJP takeover. The BJP’s baggage is its performance as the ruling party at the Centre. The farmers’ protest, now into its third week and just as robust, spontaneous and united as it was on the first day, November 27, is a challenge that the BJP has to be able to win with laurels. What happens in New Delhi will certainly have an impact in West Bengal, which is as politically conscious as it is culturally proud.