Trump’s senior officials who visited the region recently have already put the basis for the anti-Iran alliance into place. 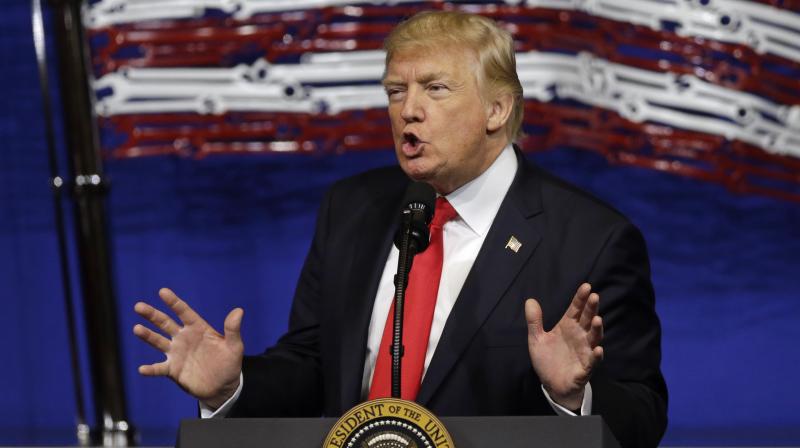 The White House has announced that Saudi Arabia will be the first foreign country Donald Trump will visit as President when he begins his tour to the kingdom, followed by Israel and the Vatican, on May 19. He will thus become the first US President to make his inaugural foreign tour to a Muslim country.

The administration clearly picked Saudi Arabia as the first stop on the tour in a bid to counter the widespread impression that the President is Islamophobic. This impression is not surprising given that he had spent the election campaign promising a ban on Muslims’ entry into the US and then twice tried to enforce it through administrative orders, the implementation of which was only thwarted by court interventions.

In Riyadh, besides attending the bilateral summit with King Salman bin Abdulaziz, Mr Trump will be meeting members of the Gulf Cooperation Council and the selected members of the Organisation of Islamic Cooperation, excluding Iran and Syria.

The Trump visit to the kingdom will be underscoring both the success of the Saudi outreach to the new administration and the determination of the President to recommit to the Saudi-led regional alliance. Not surprisingly, Iran will be a priority concern for both sides.

Ali Shihabi, a pro-Saudi commentator, sees this visit as a solid US commitment to defending the Gulf monarchies from Iran, ISIS and Al Qaeda, which in his view are making a determined effort to bring down the monarchies that “constitute the front line in the battle against terrorism”.

Mr Trump’s senior officials who visited the region recently have already put the basis for the anti-Iran alliance into place.

Thus, US secretary of defence James Mattis declared in Riyadh that the “United States wants to see a strong Saudi Arabia,” and added that “there is disorder wherever Iran is present.”

Shortly thereafter, secretary of state Rex Tillerson said: “Iran is the world’s leading state sponsor of terrorism and is responsible for intensifying multiple conflicts and undermining US interests… A comprehensive Iran policy requires that we address all of the threats posed by Iran, and it is clear there are many.”

Saudi Arabia seems to be fanning the flames of antagonism for Iran. In a recent interview, its deputy crown prince and defence minister, Prince Mohammed bin Salman, rejected any possibility of a dialogue with Iran, even giving a powerful sectarian spin to his stand: he said dialogue was impossible because of what he described as the Iranian religious conviction that Shias were destined to dominate the Islamic world, with the advent of the Mahdi, the “Hidden Imam” in Shia tradition.

In the run-up to the Trump visit, both the US and Saudi Arabia are trying to push through contracts worth tens of billions of dollars in defence sales to the kingdom. Items under discussion include the Terminal High Altitude Area Defence (THAAD) missile defence system, valued at about $1 billion, and a C2BMC software system for battle command and control and communications. Other items being discussed are combat vehicles and a $11.5 billion package of four multi-mission surface combatant ships. Also under negotiation are more than $1 billion worth of munitions, including armour-piercing penetrator warheads and paveway laser-guided bombs. The Obama administration had suspended the planned sale of these items due to the destruction wreaked by Saudi bombardment in Yemen.

While these defence deals will certainly sweeten the run-up to the visit to Riyadh, the kingdom cannot ignore the fact that it is dealing with a mercurial leader. At the end of April, just when the Saudis were basking in the positive atmosphere created by Prince Mohammed bin Salman’s meeting with Mr Trump a few weeks earlier, the US President in a press interview went back to his campaign rhetoric and complained: “Frankly, Saudi Arabia has not treated us fairly because we are losing a tremendous amount of money in defending Saudi Arabia.” The prospective defen ce deals are the “fair price” the kingdom is willing to pay for the US backing against Iran.

National security adviser H.R. McMaster has described Mr Trump’s foreign policy approach as “disruptive”, saying that his unconventional ways could create an opportunity to help stabilise West Asia. The one area where this approach might work is pushing forward the Israel-Palestine peace process. In his recent meeting with Fatah leader Mahmoud Abbas, Mr Trump had assured the latter, saying: “We will get it done.”

Most regional observers are sceptical, not only because of the absence of interest on the part of Israel’s politicians to make any concessions, but also due to Mr Trump’s own unfamiliarity with the issues involved and his earlier positions that have seemed to be solidly pro-Israel. Still, a few commentators believe that the matter needs a fresh pair of eyes and Mr Trump, with his unorthodox approach, might just pull off a deal.

But the pandering to Mr Trump’s visceral animosity for Iran by the Gulf Arabs could have horrendous consequences. Mr Trump has already shown he is quite happy to resort to military force for short-term advantage, without necessarily weighing the full implications of those actions or even considering other diplomatic options. The attacks on Syria and Afghanistan and the sabre-rattling against North Korea suggest that the President could launch a pre-emptive assault on Iran.

It would be more fruitful if Mr Trump’s energy and propensity for deal-making were to be channelled towards diplomacy and negotiation. But there is no hint of this either in Riyadh or Washington.