According to the latest official data, about 670 million Indians have received at least one shot of a Covid-19 vaccine 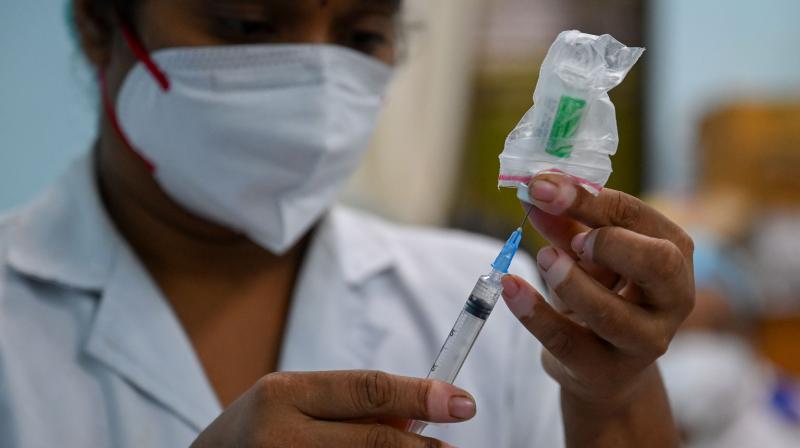 A health worker prepares a dose of the Covishield vaccine against the Covid-19 coronavirus, at a vaccination centre in Rajawadi Hospital in Mumbai. (Photo: AFP/File)

It was the year after the Second World War began. Vaccination drives in British India had slowed, but smallpox had erupted again. Like his counterparts elsewhere, a young Indian Army surgeon based in Kakinada received orders to vaccinate on a war footing immediately.

Units to manufacture a smallpox vaccine had already been set up in India by then; but the deaths of some after receiving it had unleashed considerable scepticism.

Dr Vakkalanka Kamaraju was worried too. Still, he vaccinated hundreds, including his own brood of eight kids, hoping that their young ages would neutralise detrimental side effects, if any. He didn’t inject his wife. Some weeks later, smallpox killed her.

The doctor went out of his mind. He ditched medicine, took to drinking and, according to family lore narrated by his son (also a doctor and this writer’s father), he would pull out a planchette, night after night, and attempt to “contact” his dead wife.

Dr Kamaraju’s ghoulish nocturnal hobby may be a bit of family embroidery down the decades.

But there is no doubt that vaccine scepticism prevailed, even when research and trials were not forced into overdrive by a sudden pandemic like Covid-19.

According to the latest official data, about 670 million Indians have received at least one shot of a Covid-19 vaccine, while another 255 million are fully vaccinated now.

But what about the rest? Vaccines are more easily available now. And yet, a recent study by a medical team at Mumbai’s Tata Memorial Centre found that vaccine hesitancy persists both in rural and urban India.

Predictably, and despite the immense advances made by scientific research since the last century, rumours and superstition abound.

Some villagers burn nightly fires to appease the angry gods who “punished mankind” with the pandemic, others prefer quacks and their dubious “cures” for Covid-19. Some believe that the vaccine will cause infertility, others that it will kill. Many are convinced that Ganga water is the only panacea, and that “oxygen-exhaling” cows will decimate the pathogen.

Earlier this year, health experts urged a better information campaign across rural India, such as the one that had led to the success of India’s polio immunisation program and its “polio-free” status in 2014.

Communications have improved to an extent. A study last month by Local Circles, a community social media platform, showed that vaccine hesitancy now prevails only among around seven per cent of the total population.

Interestingly, other research on health sciences server Medrxiv suggests that linguistic barriers could be one reason, since the Cowin application is in English. It also found that vaccine acceptance was generally higher among those who were completely immunised as children themselves.

But what, then, explains the balderdash spouted by “woke” anti-vaxxers among the well-heeled, well-educated elite of big cities like New Delhi and Mumbai, all of whom have been protected by jabs -- received on their posteriors during their infancies -- against measles, mumps, rubella, meningitis, yellow fever, tuberculosis, diphtheria, cholera, and countless other deadly diseases, themselves?

It’s no coincidence that those who regurgitate unscientific claims on their social media handles are bitter critics of the current Prime Minister, whom they somehow see as the nefarious beneficiary of the vaccination drive. Given that they hold Mr Narendra Modi responsible for all evils committed even by previous governments, this is hardly a surprise. Nor is the fatuous corollary that the anti-vaxxers are virtuous paragons committed to fight this villainous government.

And elite education notwithstanding, “we Indians are naturally immune to viruses” is a popular toast among the chatterati of Malabar Hill and Lutyens’ Delhi when clinking glasses, or, when surfing the manure-rich social media for fresh anti-vaxxer droppings.

Last Thursday, US legislators demanded the closure of the social media accounts of at least 12 rabidly anti-vaccine “influencers”. They include environment lawyer Robert F. Kennedy, Jr and anti-vax entrepreneurs Ty and Charlene Bollinger, who promoted the conspiracy theory that Bill Gates wants to inject everyone with microchips as part of the vaccination programme. There are promoters of bogus dietary supplements to tackle Covid-19, and an African-American activist who claims that the vaccine is an attempt to “eradicate” black people.  Finally, there is Nobel Prize-winning French scientist, Luc Montagnier, who had expressed his reservations about vaccinating people en masse during a pandemic, but was misquoted enthusiastically by speed-reading sceptics in India as claiming that those who took the vaccine would be dead in two years.

Given the ease of digital access in India’s cities and an inherent disdain for Indian scientists, ludicrous theories like these find plenty of takers among the “woke” elite of urban India.

Indians expect Bollywood, OTT and sports stars to be role models. Though unrelated to vaccine scepticism (and whether fairly /unfairly so), Shah Rukh Khan was removed from an advertisement because his son is facing a drugs-related investigation. Amitabh Bachchan withdrew from advertising pan masala, a controversial product.

But there are others who have put out mixed signals. Bollywood star Akshaya Kumar, who did contract Covid-19 and has possibly been vaccinated by now, cheerfully told millions of Twitter followers that there “isn’t a single disease that our traditional systems of medicine cannot cure”.

Actress Pooja Bedi, who moaned about having to quarantine in Goa during the lockdown, calls the vaccine “sinister and illogical”.

Another senior television actress who runs a strident anti-vax campaign on her social media pages, self-indulgently and routinely blathers about “my body, my right”.

Since compulsory vaccination is next to impossible in any democracy, anti-vaxxers are being checkmated in other ways. “No jabs, no jobs” is one policy taking root, travel bans on the unvaccinated are another. In Germany, those who refuse to take the vaccine will henceforth have to pay for Covid-19 tests themselves.

India’s elite couldn’t give a toss. They can afford to hire private jets and take the longer “scenic route” to anywhere. As for jobs, why would they need them?

“It’s easy to eschew vaccination if you can hide away in your penthouse and don’t have to take public transport to work,” says senior Mumbai-based editor and enthusiastic pro-vaxxer Malavika Sangghvi. “Stars who use their platforms to advocate against vaccinations are behaving irresponsibly. They should be using their sway over public perception to do the right thing, especially when it comes to public health.”