Obama’s legacy, and lessons for us all...

Obama faced the dilemma whether or not to support allies like President Hosni Mubarak of Egypt. 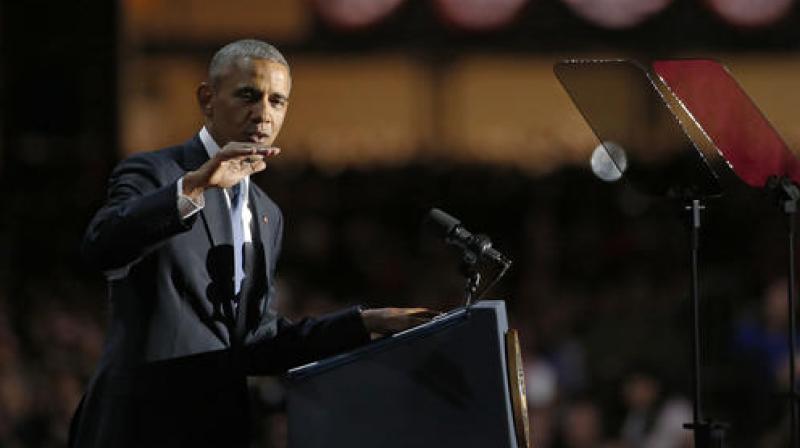 US President Barack Obama’s farewell address earlier this week was a masterful review of his work, the vision he never ignored and the challenges ahead. Looming in the backdrop was of course President-elect Donald Trump. An intelligence report on the Russian role in the American elections and Mr Trump’s links to Russian President Vladimir Putin has generated controversy and Obama-Trump bitterness. How then does the Obama presidency rate as it ends on January 20?

His meteoric rise and triumph in 2008 was so unique and historical and the expectations so high that it was natural to fear that he may fall well short of the promise of “Yes We Can”. Two speeches revealed his vision as his presidency commenced.

At Prague in April 2009 he announced that the US will ratify the Comprehensive Test Ban Treaty (CTBT) and seek a nuclear weapon-free world. This begot him a Nobel Prize — as some pointed out, not for what he had done but what he intended to do.

In June at Cairo University he delivered a masterly address, often called “A New Beginning” speech, which examined the complex links between West, Islam and radicalisation. Having inherited two wars from his predecessor in Afghanistan, dubbed a war of compulsion, and Iraq, characterised a war of choice, he was contextualising US intervention as not anti-Islam but anti-radicalisation of a great religion. He argued that no purely military battle against radicalisation could work if the minds and hearts of Muslims were not won over.

However, simultaneously a financial crisis was breaking in out in America, building up since 2008, over the government’s backing of home loans by banks like Fannie Mae. By mid-2009 even the vaunted Citibank was in trouble. Separately, US automobile majors like General Motors ran into financial distress.

President Obama met both the challenges head-on, refinancing tottering organisations to minimise distress to the people and ensuring their survival and future revival.

The Arab world, meanwhile, exploded with popular uprisings against autocratic leaders, some of them close allies of the US. Popularly called the “Arab Spring”, it began from a Tunisian street in December 2010 and swept east, overthrowing leaders in Tunisia, Libya, Egypt and creating instability in Yemen, Bahrain and later Syria. Mr Obama faced the dilemma whether or not to support allies like President Hosni Mubarak of Egypt or let largely peaceful protests vent public ire, leading perhaps to a largely bloodless transition to representative and popular governments. The logic flowing from his Cairo University speech was that US sought partnership with the Islamic nations and not indirect control of their destinies through military dictators fed and armed by the US. Despite Saudi ire over the US not backing Mr Mubarak to the hilt, Mr Obama let the forces of protest play out, ensuring that the Egyptian Army stayed neutral and allowed the transition to popular rule.

Unfortunately,though, Mr Obama erred on two counts. First, in countries like Egypt the only well organised opposition after decades of state repression of dissent was in the mosque and in the form of the Muslim Brotherhood. They seized control of the popular uprising leading to the election of a President sympathetic to their cause. Once in power they began imposing their agenda and social control that belied the open and multi-religious ethos of Egypt, which has a substantial Christian Coptic population. The Egyptian military eventually turned the clock back.

Second, in tribal societies like Libya or multi-ethnic nations like Syria or bi-religious states like Bahrain and Yemen, the minute the dictator’s hand was lifted or even weakened, schisms — ancient and deep — resurfaced. Mr Obama withdrew US troops from Iraq in December 2011 as the post-Arab Spring madness was unfolding in Syria. The Sykes-Picot line separating Iraq and Syria is a post-World War I cartographic absurdity, dividing peoples of the same race, religion or history.

Moreover, in Iraq from late 2011 till the capture of Mosul in June 2014, the US ignored poor governance by Prime Minister Nouri al-Maliki, alienating Iraqi Sunnis. Compounding the problem was the haphazard arming of anti-Assad Sunni groups in Syria by the Saudis, Qataris and the CIA. The blame for emergence of the dystopian ISIS and its spread in a flash to Iraq and the fall of Mosul must rest at Mr Obama’s doorstep.

The Obama presidency began after India’s high romance with President George W. Bush, who unshackled India from decades of discriminatory technology control regimes and sanctions by approving the US-India civilian nuclear deal. India also feared a “re-hyphenation” of India and Pakistan when US special envoy Richard Holbrooke began mooting visits to the region. Mr Obama was not India-focused till his visit in October 2010, perhaps distracted by the banking crisis at home and the troop withdrawal from Iraq and the drawdown in Afghanistan. But eventually he resumed from where George W. Bush had left US-India relations.

Mr Obama became the first US President to visit India twice in his presidency, being chief guest at India’s Republic Day in 2015. He enhanced defence cooperation, enlarged areas of cooperation, increased intelligence-sharing and counter-terrorism cooperation and openly committed the US to supporting India’s permanent membership of the UN Security Council and the four technology control regimes like the Nuclear Suppliers Group, etc. In his farewell speech, he rightly noted his successes at reversing recession, rebooting auto industry, unleashing job creation, shutting down Iran’s nuclear programme, eliminating Osama bin Laden, 9/11’s mastermind, and opening a new chapter with Cuba, among other things. Two of his big achievements — Obama healthcare, extending cover to millions, and the Paris Agreement on climate change — are likely to be negated by his successor. So he philosophically concluded that the “work of democracy has always been hard, contentious and sometimes bloody”. A good lesson from the world’s oldest democracy to India, the biggest.