Three decades later, those threats seem to be once again translating into acts 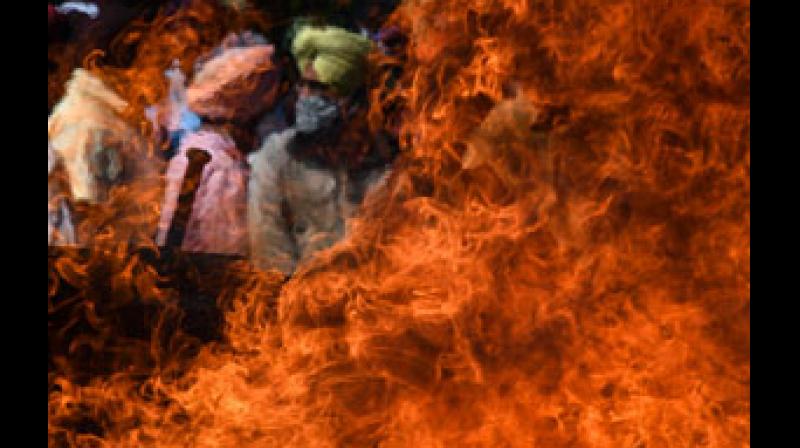 The abhorrence for Pakistan’s ways and how these will lead the whole of J&K into a bigger trap of violence and counter violence must be dwelt upon for all segments of society. Representational Image. (AFP)

Recalling January 1990 brings horrendous memories of the selected targeting of Kashmiri Hindus by Islamists who were Pakistani proxies determined to cleanse the Valley of any non-Muslim presence. That was at the beginning of the “proxy war” launched by Pakistan when violence rocked Kashmir and terrorism took root. That targeting led to an exodus of many while some others remained and courageously bore the threats which came their way. Three decades later, those threats seem to be once again translating into acts. Seven persons, six from the minority communities (Hindu and Sikh), were recently gunned down by terrorists without remorse in an audacious attempt to challenge the Indian State just when stability appeared to be emerging and incidents of violence receding.

Both the killings of 1990 and 2021 had a similar reasoning. The peaceful coexistence of communities is anathema for the grand design of Pakistan which perceives that this phenomenon replicates India’s secular model. It believes that as long as this replication exists with the presence of symbols of tolerance and pluralism, the desire of the people towards affinity with Pakistan is unlikely to manifest itself. This belief extends from the idea that Islamic nations must be united under the ideology of Political Islam stretching from the Middle East through Afghanistan to Pakistan and that the only way to wrest J&K and integrate it with Pakistan is by extending Political Islam’s ideological influence into it.

The Pakistani grand strategy failed to make headway against the Indian political and security response, although tactically the resort to minority killings did take place from time to time. In the dynamic situation of the last three decades, terrorist elements have often chosen to message their continued capability by attacking these soft targets through criminal acts. We cannot forget the milestones of the proxy war which include minority targeting at Wandhama, Nandimarg and Chittisinghpura, besides many others.

It is entirely the courage and faith that the minorities repose in the political and security communities which has kept them back in the Valley. This is the reason why the Indian establishment has to robustly prevent any repeat and provide 100 per cent security to the minorities of Kashmir. Already, a number of Hindu and Sikh government and other workers have abandoned their work and have headed for Jammu. I recall the aftermath of Chittisinghpura in March 2000, when 36 Sikhs had been gunned down by the Lashkar-e-Tayyaba and the manner in which government officials, politicians and even Army officers appealed to the minority Sikh community not to resort to the extreme option of leaving Kashmir; that would have exposed the inability of the Indian State to guarantee the security of its own citizens. It is now the key priority once again; securing Kashmir’s minorities.

The minorities reside in two ways in the Valley. There are clusters such as Baramula, Tral and Mir Bazar, where a segment of the minority Sikh population resides; these probably need incidental security. But there are others who live in large numbers in isolated houses that are well known in their majority neighborhoods. Besides that, there is some movement for work and existence at the workplace itself. Providing physical security at all places is pretty much impossible, hence the term “soft target”. Cluster living can resort to the village defence committee system which was successfully followed in the Jammu region, but that would be fraught with danger as the availability of weapons would also be a great temptation to terrorists in the light of major curtailment on availability of military wherewithal. As the strength of terrorists reduces, it is also usual for the reduction of the Army’s domination operations and checks through vehicle checkposts. These measures impose caution on people and act as a deterrence for the movement of terror groups; they must be restored in good measure with renewed vigour while also seeking public cooperation.  The offensive aspects must include renewed intelligence and a marked campaign against all overground worker networks in J&K. The latter have been under focus for some time but could be showing signs of flagging. Terrorist resurgence, which is being attempted through the trigger of Afghanistan and the inspiration brought forth among Islamist elements by the return of the Taliban 2.0, normally rides on the back of networks. The counter terrorism (CT) grid of the Indian Army and other security forces is sufficiently experienced to remould focus at short notice.

It is essentially offensive in nature, and minority protection forms a subset of its strategy. It relies considerably on the intelligence generated by the J&K police and Central agencies and hopes its generic domination operations will also secure the minorities. This may have to change if the proxies have to be denied any further success. The CT grid will have to cater to small team domination of multiple identified zones where the minorities reside or work. Transit routes too need security. While doing all this, it is controlled aggression that might need to be applied and we must be prepared for allegations of excesses and human rights violations.

Counter terrorism operations are not just robust and kinetic actions and the social domain plays an equally significant role in neutralising the aims and effectiveness of terror groups. The current targeting of minorities has been claimed by the so-called “The Resistance Front”, an umbrella organisation of prominent terror groups put together by Pakistan’s ISI to escape the FATF strictures; a non-Islamic name is seen to contribute to the perception that this is a home-grown Kashmiri outfit. While the government’s outreach to majority youth and citizenry in general is making good progress, the effort to change the perception towards terror groups needs greater focus. The abhorrence for Pakistan’s ways and how these will lead the whole of J&K into a bigger trap of violence and counter violence must be dwelt upon for all segments of society. The realisation of the importance of the presence of minorities for J&K’s larger image must be emphasised. A surge of nationalism has been taking place with the presence of symbols such as the tricolour at prominent landmarks in Kashmir. Equal vigour will need to be brought among the youth and others in favour of diversity and the virtues of being counted as a land and people who respect humanism and not obscure ideologies which target those with alternate culture and faith. India as a nation has far too many virtues to allow obscurantist thinking such as minority targeting to rule within any part of its borders.