It remains to be seen how Labour will decide to vote if its amendments are defeated, which seems likely. 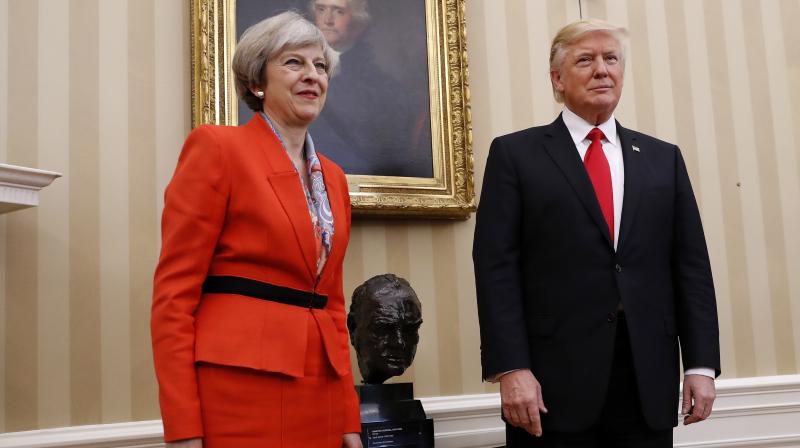 US President Donald Trump stands with British Prime Minister Theresa May in the Oval Office of the White House in Washington. (Photo: PTI)

Remarkably, the Speaker of the House of Commons, John Bercow, declared on Monday that he would be “strongly opposed” to the idea of US President Donald Trump addressing the British Parliament during his proposed, but as yet unscheduled, visit to London.

His declaration followed a weekend of anti-Trump demonstrations across the country, and polls suggesting that a majority of Britons are anyhow uncomfortable with the idea of a visit, at least for as long as the new US administration’s supposedly temporary ban on immigration from certain Muslim countries remains in place.

In the wake of a visit to Washington, British Prime Minister Theresa May was widely pilloried for her hesitant and mealy-mouthed response to the ban — although she did not fare quite as badly as Australian Prime Minister Malcolm Turnbull, whose silence on the matter was rewarded with a White House leak revealing that he had been at the receiving end of a crude ear-bashing from Trump for daring to suggest during a phone call that he expected the US to honour Barack Obama’s pledge to accept as refugees 1,250 of the unfortunate souls whose lives Australia has cast into limbo on godforsaken Pacific islands.

May successfully manoeuvred to become the first foreign head of government to visit Trump as part of her campaign to prove that Britain would enjoy a privileged status at the global level following its EU exit. After her US visit she headed straight to Turkey for a tête-à-tête with another elected authoritarian, who agreed to purchase British fighter jets.

Back home, meanwhile, she suffered a minor judicial blow when the British Supreme Court dismissed government arguments for triggering Article 50, which formally sets in motion the tricky process of wriggling out of the EU’s tentacles, without a parliamentary imprimatur.

The first vote last week went overwhelmingly the government’s way, with official backing from the Opposition Labour Party, although several dozen of its MPs defied the party whip. A second vote is expected, with several amendments to the legislation, from Labour as well as the more or less unequivocally anti-Brexit Scottish National Party and the Liberal Democrats in play.

Not altogether surprisingly, the Brexit debate has sparked further disarray within Labour’s parliamentary ranks, with many of party leader Jeremy Corbyn’s allies deserting him, some even resigning from the shadow Cabinet, on the Brexit vote.

On the face of it, there is merit in the Labour leadership’s stance that triggering Article 50 only endorses the popular will expressed in last year’s Brexit referendum, and that the party’s energies will be devoted to securing the best possible terms for the disengagement, whereby Britain, for instance, guarantees residency rights to the more than three million EU citizens living and working in the country, and retains membership of the European single market.

At the same time, though, it’s hard not to empathise with an MP such as Tulip Siddiq, who cannot bring herself to vote in favour of triggering Brexit given that 75 per cent of her London constituents voted to remain in the EU, and commendably declared: “I do not represent Westminster in Kilburn and Hampstead, I represent Hampstead and Kilburn in Westminster.”

It remains to be seen how Labour will decide to vote if its amendments are defeated, which seems likely. It could choose to abstain, but that may only serve to reinforce the already widespread public perception of a disconnect between Westminster and the people it purports to represent, which is precisely the sense that has driven so many voters towards “maverick” outfits such as the UK Independence Party.

There is a growing chorus of opinion across the ideological spectrum pushing the line that the referendum result — 52-48 in favour of Brexit — is not sacrosanct, and that it could legitimately be overridden by a parliamentary vote, if not right away then in the near future.

This is tricky. Sure, it can be conjectured that at least some of those who couldn’t be bothered to vote would have done so had they known which way the result would otherwise go, thereby tilting the odds in the other direction. It may also be plausible to argue that, given the degree of false propaganda deployed (by both sides, mind you) during the campaign, a second referendum — or within the next few years — would yield a different outcome.

No one could seriously argue, however, for referendums to be revisited ad infinitum. But the only alternative surely isn’t May’s recipe for a nation that aspires for a “glory” that vanished with its empire many decades ago, and ends up effectively as Little Britain, sans greatness or much influence. But any middle way remains elusive for the time being.